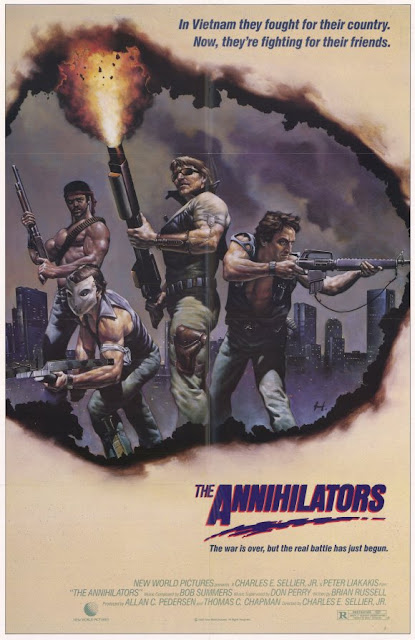 You see this poster? This is what the poster for The Expendables should have been like. Stallone seemed to have gone as far as he could go in terms of bringing us an old school straight up action flick with some of our most favorite action hero's of the 1980's, but when it came down to the marketing of that film I think they really dropped the ball. Instead they go with lame studio shots of all the actors staring at the camera? What a let down man! I wish they had gone old school with the poster art and marketing as well. Get someone to paint an embellished and badass poster of the principal players in some action shot or something.

But anyway, back to The Annihilators. I wish I could say that this film lived up to this rad poster, but it doesn't. First off, the guys on the poster look almost nothing like the guys in the film. The only thing on here that slightly resembles the ensemble cast in the film is there facial features, but that's it. They're not buff (at all) and the guy bending over with the mask? Not in the film. I know it's supposed to be the guy from the group who becomes the alcoholic and ends up homeless (the guy on the cover of the Japanese VHS below), but he doesn't have a mask, and he's not ripped, and he doesn't use a crossbow.

The Annihilators works if you don't go in with any expectations whatsoever. It is what it is, a low budget B-Movie actioner with a few noticeable faces, but nothing to offer the audience that would make it stand out from the overcrowded DTV genre of the mid 1980's. It's not a bad film, but it's not a good film either. It's just kind of ........there. Even in the realms of a low-budget DTV flick, there is plenty you can do with the action to  entertain an audience, just watch the super awesome and crazy cool Peacemaker for a good example. But here we're treated to really standard stuff in terms of fist fights and shootouts with not one single "Oh shit!" moment.
The first half of The Annihilators is kinda slow as it builds up the story of the 5 former Vietnam soldiers as we're introduced to them in combat during the war and then we jump forward to the present (1985) where one of them is killed by a local gang who's taken over the town with violence and mayhem. The remaining 4 friends get together after attending his funeral to find out what happened to him and end up using there soldier skills to help the residents of the town take back there city. It's not until the second half where the action finally kicks in with a few fist fights and shootouts, but nothing really awesome and that's probably going to be my biggest complaint about this, that the action is just pretty tame. I mean, look at films like Phantom Soldiers. Look what can be achieved with very little money, but a lot of creativity.

This is a film I remember seeing at my local mom and pop video store back when it first hit VHS in '85/'86. I even remember my dad renting it, but that's it. I don't remember what either of us thought of it at the time, which definitely says something. I'll always remember this badass cover art though. That's as cool as it gets in my book.

The cast in here is pretty great, with the most recognizable faces being Christopher Stone (Cujo, The Howling) and Lawrence Hilton- Jacobs (Welcome back, Mr. Kotter). The real standout though is Paul Koslo, who plays the gang leader Roy Boy Jagger. This guy was nuts and so over the top, but you had a blast watching him utter lame obscenities for no reason while also sporting one of the worst 80's haircuts I've ever seen. I could have sworn for at least the first 30 minutes of this that he was actually Micky Dolenz from The Monkees. Man, how shocked I was to find out that it wasn't him after all because this guy is a dead ringer for him.

I was really excited to finally get a chance to sit down and watch this one, especially after getting my hands on an original Japanese VHS, but I have to say that I was left a little disappointed. I think maybe my expectations were too high though. Especially after reading my buddies Ty and Brett's more favorable take on it over at the great action review site Comeuppance Reviews. You can check out there awesome review here. I think in my case, I was hoping that it would have been an over-the-top and ridiculous action-fest like Ninja III: The Domination or Never Too Young To Die; two films made about the same time that were both low-budget but brilliantly insane. But that's just me as I know a lot of people really like this film. It definitely has it's points though. A solid cast and as pointed out in the comments section of Ty and Brett's review, carries an unmistakable A-Team vibe throughout. I just wanted more action, more blood and a higher body count. I think any one of those things would have gone a long way.
Posted by robotGEEK at 2:17 PM