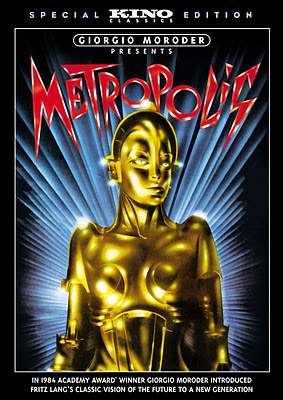 Quick history lesson:
Metropolis was made in 1926 by German director Fritz Lang. At the time this science fiction epic was  the most expensive and biggest film ever made. Originally, Metropolis was intended to be epic, clocking in at 210 minutes (almost 4 hours long) upon it's first release. However after it's disastrous initial premiere in Berlin in 1927, it was systematically and severely cut down to 93 minutes for it's re-release in Germany and 114 minutes for the American release. Since 1927, Metropolis has been released dozens and dozens of times on VHS and DVD, most of them really bad quality VHS, but the best being Kino's 2010 restored release titled The Complete Metropolis.

Because of these severe and drastic cuts, Metropolis was left almost incomprehensible with many scenes and title cards having been lost, some of them forever. But throughout the years, beginning with Academy Award winning music producer Giorgio Moroder (Scarface) in 1984, missing scenes and title cards have been discovered all over the world having been found forgotten in museums, archives and most notably, in private collections. In 2010 Kino released the most complete and exhaustively restored version to date called The Complete Metropolis, bringing the total running time up to 145 minutes. It's still not the complete version as originally released in Germany in 1927, not by a long shot, but to date it's the most complete we're likely to get unless the additional 65 minutes of missing footage ever gets found.

In 1984, Giorgio Moroder had found some key missing scenes and title cards that had been thought lost forever. Using the original script and novel, he inserted the missing footage back into the film and created new title cards along with stills to fill in some gaps putting together, up until that point, the most complete version seen in the last 50 years. But that was 27 years ago and more footage has been found since then resulting in Kino's release of  The Complete Metropolis in 2010. Additionally, Giorgio Moroder wrote and produced new 1984 rock era music which was performed by the likes of Queen, Pat Benetar, Billy Squire, Bonnie Tyler and Freddie Mercury (to name a few) and inserted into the film as well as color tinting the black and white film to great effect. Ultimately this gives the film a more retro look and feel and has since become known as Giorgio Moroder presents Metropolis.
End history lesson.

Metropolis is essentially a pretty simple story. There are two cities in Metropolis, the city above and the city below ground. Below is filled with "the workers" who man and operate the monstrous machines that run the city above in a dark, dirty and claustrophobic environment. They serve no other purpose other than to work the machines that make Metropolis. The city above ground is a beautiful and lustrous haven for the rich and elite run by the master of Metropolis, Joh Frederson. When Joh Frederson's son discovers this secret underground world of workers, his whole world is shaken because he feels it's wrong. Meanwhile, a mad scientist who's obsessed with the loss of his lost love Maria has created a robot designed to take her place, only he needs a soul  to complete the robot, and that's where a new woman (also named Maria) enters the picture. He steals her soul, implants it into the robot and Robot Maria is born to wreck havoc and ultimately destroy the city.

This is a purely visual film, and that's what makes it so unique, especially considering it was made in 1926. The special effects, the sets and futuristic design are just simply breath taking and amazing. When you consider this was  made before talking pictures, color and even sound, that's a pretty impressive feat. Sure the story is pretty juvenile when you actually try to analyze it, but the simplicity of it all works because of the visual aspect.
I remember the first time I ever saw this film. I had a get together with a bunch of friends and my friend Lisa brought a bootleg VHS over and I was immediately mesmerized. The images completely blew my mind and I've been pretty much obsessed with it ever since. How obsessed? I currently have this poster framed and mounted on my living room wall and I have the soundtrack on vinyl, which I then transferred to CD and my iPod to listen to in my car. After my first viewing of this on that bootleg VHS a lifetime ago, I immediately sought it out on eBay and paid an absolutely ridiculous sum for it, especially for a used VHS. I wasn't going to let the prick who I was bidding against win this one, not by a long shot. I "had" to have this movie and I won't embarrass myself by telling you what I ultimately paid for it, its ridiculous. I don't know if it would have had the same effect had I seen the original unaltered black and white version first, because it was this version that I saw first, with the rad 80's rock music and color tints. And let me tell you, those changes make a world of difference. I love the restored version Kino put out last year just as much, but in a more artistic way. Giorgio Moroder's version is a more retro and hip version.

Picture:
This version just doesn't compare to The Complete Metropolis, even on Blu-ray. With this version, all they did was just make it "finally" available on DVD and Blu-ray, which it hadn't been since it's release in 1984, so just that alone was pretty huge news for filmgeeks like myself. But no work was done to restore the footage or clean it up like they did in The Complete Metropolis, so it's still jumpy, scratched and pretty grainy in some scenes. But if you've watched this countless times like I have, you've just grown accustomed to watching it this way anyway. The work done on Kino's The Complete Metropolis is still the absolute best version you will find anywhere and is most definitely worth seeking out, but for a more retro feel with some pretty badass 80's rock songs, this is a must.

Check out the two trailers I've included for both Kino's restored Complete Metropolis and for Giorgio Moroder presents Metropolis so you can get a sense of how different this one film can be interpreted by making some changes to the music and color tints. It's pretty amazing. I love the look, sound and feel of the original black and white version, but the geek in my still loves what Moroder has done to his 1984 release.


Metropolis is one of the most influential science fiction films ever made and begs to be seen.
Posted by robotGEEK at 3:44 PM