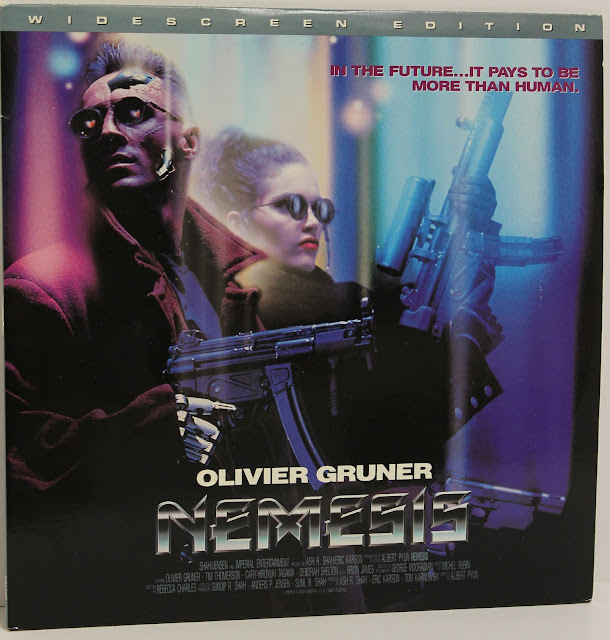 Back in September, I had miraculously stumbled upon by accident a practically brand new Pioneer Laserdisc player collecting dust at a local antique store. I've always wanted one, but because of how high they go for these days, I always thought I would have to wait for Christmas or something to be able to reward myself with one. Apparently the guy I bought it from had no idea what he had as he sold it to me for a mere $20!
When I can remember, I browse eBay for used Laserdiscs but even though they're not terribly expensive, I had not yet found one I felt comfortable spending the kind of money Laserdisc owners want for rare and hard to find films. On Laserdisc, these rare or OOP films can go for monstrous figures, at least for me. Currently, my obsession is with old VHS tapes, but occasionally browse for Laserdiscs knowing that back in the day certain films were released in this format that were never released on VHS, DVD and even Blu-ray.
Nemesis was released on VHS and DVD, but never in widescreen and always in crappy full frame. The DVD has long been out of print and like Fright Night 2 and Split Second, go for crazy numbers on the internet, even in full frame and a bare bones DVD release with no special features. I still can't explain it.
Imagine my surprise when I found Albert Pyun's post apocalyptic tour de force Nemesis available in it's glorious 1:85:1 aspect ratio. Most people who are familiar with his work knw that most of his films are not available in widescreen for some odd reason. There are a few, but not many considering how many movies the guy has made. So holy shit I'm pretty excited right now. This is one of my favorite all time Albert Pyun flicks and whether you like his films or not, most people agree Nemesis kicks all kinds of ass with it's outrageous action, gratuitous nudity and over the top violence. Bullets, boobs and blood; all the necessary ingredients for any cult classic. I couldn't imagine a more fitting start to my Laserdisc collection.
Posted by robotGEEK at 7:13 PM