Just got this sweet PAL VHS of one of my favorite comic book and
Dolph Lundgren flicks, The Punisher (1989), in the mail today.
Check out my review from this past September here. 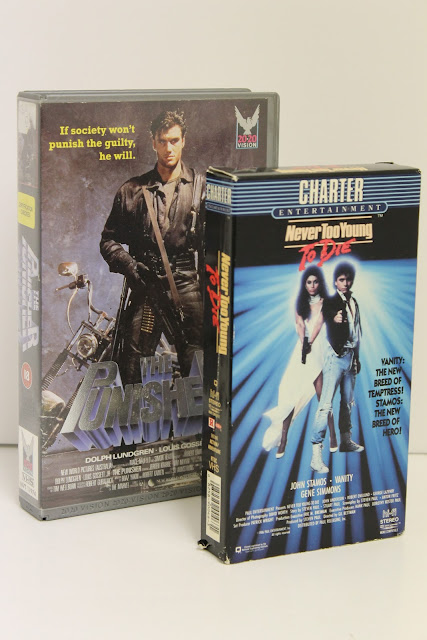 I think it's funny how every single image from the back of this VHS cover
doesn't appear in the U.S. release.
The second image looks like the sequence from the beginning of the film where the mob guy walks out of court and gets into his car with his goons where we see a "from behind" shot of the punisher watching from far away on his bike where he proceeds to follow them.
But it's a back shot and not the shot they show here. And the last image is when he's demolishing the illegal gambling
room with a hail of thousands of bullets. But him hanging from a chandelier is not in there either. I gotta check out the workprint version of this someday.

I wanted to add a side by side comparison of this original clamshell case for this film compared to a standard U.S. cardboard sleeve.  Here I used one of my favorite "WTF?" films, The 80's Trash Fest, Never Too Young To Die.  Look how huge this sucker is! I wish the U.S. took more cue's from the United Kingdom in terms of how to package a VHS back in the day.

Posted by robotGEEK at 5:39 PM