Although this blog is mainly dedicated to older films in the sci-fi, horror, action and exploitation genre's, I just as much enjoy watching new flicks when I can, so here are some quick thoughts on some recently released films. 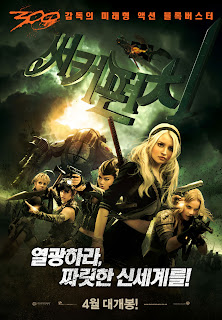 Sucker Punch:
Unfortunately I didn't enjoy this nearly as much as I thought or had hoped I would. I think it had a few cool standout scenes, but overall it was such a jumbled mess.
First of all, I didn't like the premise of how it all pretty much takes place in babydoll's head. It's all said in the trailers so I don't think I'm giving anything away. I didn't like how all these badass sequences were the result of a dance number she "supposedly" does to entertain men and the fact that we never got to see these "supposedly" incredible dance numbers. I felt kinda cheated in that aspect.

Scott Glenn was badass. Most of the visuals were as well, but way too much slow-mo for my taste. Sad thing is that none of these girls even looked very attractive under a pound of makeup. They looked more like prostitutes than anything, which is sad because they are all kinda hot in there own way.

I think the best sequence for me would have been the sequence in the bunkers fighting the soldiers in gas masks. Visually that was just an awesome thing to see and if there was an entire movie revolving that story somehow, then that would definitely be something. But all these sequences you see in the trailers are so short and you want more. I've always been a fan of Zack Snyder and for the most part have enjoyed everything he's put out so far, especially Watchmen, but Sucker Punch is probably the best most recent example of a film falling short because of the "style over substance" issue. 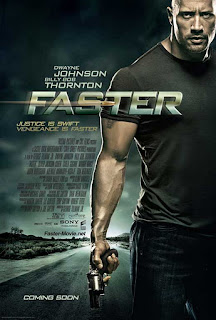 Faster:
Now this is a film I thoroughly enjoyed. This is the kind of film I wish Dwayne Johnson would be making more of instead of those crappy family films like The Tooth Fairy. If there was any other actor worthy of picking up the mantle after Schwarzenneger and Stallone, it would be this guy, but he keeps dropping the ball with these lame attempts at family entertainment when he should be focusing on becoming "the" action hero of the 2000's. I'm just sayin'.

This is a really nice throwback to 80's and 90's action filmmaking. Not a drop of CGI and pretty much as straight up as you can get in the revenge genre. It's violent, hard edged and keeps a nice constant pace. Director George Tillman Jr. adds just the right amount of visual flair that never goes overboard on the "flashy", but keeps it interesting with some nice camerawork. My only complaint, and there's just one, is that the ending should have had much more of a bang. He spends the entire movie hunting down the ringleader and when he finally finds the villain, it's all over pretty quick. I just wish it would have had a bigger ending than it did, but other than that it's pretty much one of the only rare examples of a straight up action flick you're likely to find these days. Very well made. 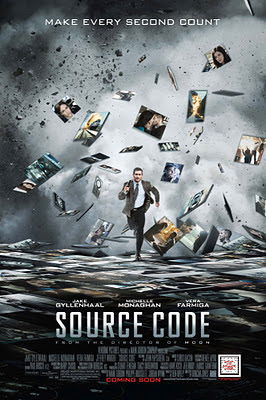 Source Code:
Duncan Jones has made two feature films, and I've enjoyed both immensely. Moon was such a rare treat in terms of old school style filmmaking that I couldn't wait to see what he was going to do next. Source Code didn't disappoint. Though it's pretty heavy on the CGI, he uses it wisely and not overtly that it takes away from the story. This ended up being more thriller than sci-fi, but it keeps it's sci-fi elements in check and we're treated to a solid thriller dealing with time travel and a plethora of "what if's".

I really enjoyed this film. It keeps you guessing most of the time and all the leads give solid performances. I don't really want to get too into the story as I'm afraid of giving too much away, but trust me when I say that this is a pretty great thriller.
Duncan Jones is definitely someone who's going to have a  standout career directing films and who seems to choose his projects wisely. He reminds me of a young Ridley Scott with his style of filmmaking and I can't wait to see what he comes up with next. 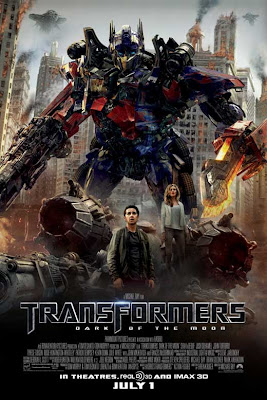 Transformers: Dark of the Moon:
I'll be honest, I am not a fan of these Transformers live action films. I hate the design of the Transformers themselves and most of all I can't stand Michael Bay's schizophrenic style of filmmaking in this series. I mean, it's pretty ridiculous. Most of the time it seems like he just threw the camera in the air and whatever happened, happened. I grew up on them with the original toys and with the cartoon series and the way they are designed in these films really piss me off. They don't look like Transformers to me. They look like something out of an anime.

But, I must say that the third installment in the series is a vast improvement. Because of the use of 3D technology, Bay was forced to keep the camera still more often than not because of the type of equipment and special 3D monster camera's they used and the film is better for it. You can actually tell what the hell is going on and who's fighting who and for a film that's filled with nonstop action from beginning to end, that's a good thing. I'll just say it, visually I was impressed with a slightly more restrained Michael Bay. The action is pretty awesome and relentless and the destruction of the city is pretty damn impressive. I'm still not sold on 3D for every film (Thor and Captain America in 3D just didn't work. 3D muddles a lot of the color and makes everything so much darker), and I'm glad I didn't see this film in 3D because it would have probably made me nauseous. I really enjoyed the expanded cast of crazies this time around, especially John Malkovich, and if you in the mood for a crazy action film with over the top destruction, you can't go wrong with this one. 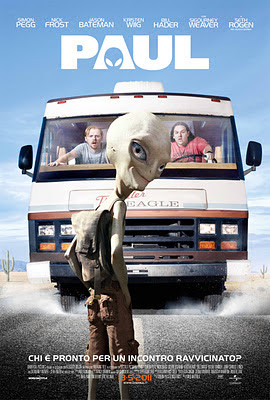 Paul:
This one was a pretty big disappointment.
Bottom line is that it just wasn't funny. I kept waiting and waiting for it to get it's groove, but it never found it and despite a pretty badass cast with the combined talents of Simon Pegg, Nick Frost, Jason Bateman, Kristin Wiig, Bill Hader, Sigourney Weaver and the voice of Seth Rogen, it just didn't work.

Most of the humor felt so forced and right in the halfway mark I knew it was a lost cause. I really wanted to enjoy it though. I mean, come on. A story about two comic book geeks who attend Comic Con and then take a cross country trip who stumble upon a smart ass and wise cracking alien while simultaneously being followed by dumbass FBI guys should be funny right?

It was a valiant effort and a pretty solid idea, but the script just needed some toning. Though it was entertaining with all the classic sci-fi film references, it just ended up being too bland for it's own good.
Posted by robotGEEK at 11:17 AM