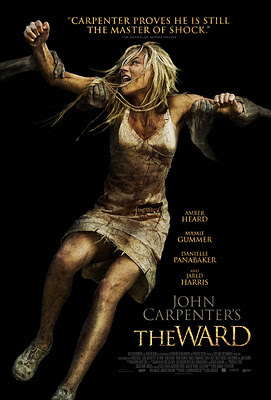 First off, I need to thank Matt over at Direct to Video Connoisseur, who's recent review for The Ward you can find here, for bringing to my attention the fact that this was currently available on Netflix Instant. The second he told me, I was on Netflix and watching it. I had been wanting to see this for a while but since it never got a release down where I'm at I was waiting for it to hit DVD. Apparently it flew right under my radar because I had no idea it was already available. Thanks Matt!

I'll be completely honest here, I loved this movie and pretty much agree with every point Matt made in his review. Watching it late last night I felt like a teenager again. I have been a filmgeek my entire life and a John Carpenter fan for just as long. He has made some of my most favorite films of all time with entries like Escape From New York, The Fog, They Live, Big Trouble in Little China, Assault on Precinct 13, and most importantly The Thing (1982), probably the best horror remake ever made and my favorite horror film of all time.

This is pure old school John Carpenter stuff here. Right from the opening sequence you know your in for something special. His visual talent is immediately apparent right from the opening scene and if you at all wondered whether he might have lost his touch as roughly ten years have gone by since he made a feature film, you can put those worries to rest because I can assure you, the John Carpenter that directed The Ward is the same John Carpenter that directed the eerie, brilliant and atmospheric The Fog (1980). Screw the crappy 2005 digitally overblown remake. If you want to see what that film was "supposed" to be like and what a true master can do with a simple fog machine, then you need to see the far superior and immensely entertaining original. I compare The Fog with The Ward because like The Fog, The Ward is a pretty straight forward story (so it seems) shot with so much brilliance in Anamorphic Widescreen that the visuals tell a lot of the story. Carpenter's visual style not only seems to have returned but actually improved since the days of the horrible Escape from L.A. and even worse Ghosts of Mars. It feels like those ten years he spent not working on a full length feature film was more of a recharge in his capabilities as a visual artist because right from the opening frame, The Ward was a pure visual feast. Keeping the CGI to a bare minimum, Carpenter instead chooses to use old school techniques and let's what you "don't" see be far more frightening than what you actually do.

Oregon, 1966. Kristen (Amber Heard) is arrested and then sent to a psychiatric facility after burning down a barn and not knowing why. Under the care of Dr. Stringer (Jared Harris), Kristen meets other inmates in the all female section of the facility with there own mental and psychological problems. Soon Kristen starts seeing a ghostly figure of a young woman appear from time to time and as she soon realizes the other girls in the facility know who this ghost is and are too afraid to even speak of her, Kristen attempts to break out of the facility and uncover who this ghost really is and also what secrets this facility holds. But as Kristen digs deeper into the mystery of the dead girl and the facility, all may not be what it seems.


This is one of those slow burn kinda films that is all atmosphere and mood with a "big twist" ending. From all the reviews I've read you either love it or hate it. Half of the reviews state that the big reveal at the end was no big surprise and had been done countless times before and could be seen a mile away. Not for me though. I'll admit, I knew there was a big twist ending and knew that it was the deciding factor on whether you love or hate this film, but I never figured it out to be honest. I was just enjoying this film too much to really care to stop and try to figure out what was really going on with this ward. I know it sounds cheesy, but I was pretty much captivated by this whole world John Carpenter created that was such a huge throwback to early 80's psychological thrillers and I enjoyed pretty much every second of it. The set design, the actors, the beautiful cinematography, and the constant chills and eerie atmosphere all came together so perfectly that in an era of overblown camera tricks and mind numbing shaky cam, it was so refreshing to see a master use the talent that made him famous to begin with and improve on it while playing homage to a dying breed of filmmaking.

Love it or hate it The Ward is John Carpenter back in full form. If you can just sit there, enjoy the ride and relish in the fact that "the" John Carpenter is back doing what he does best and not try to spend the next 88 minutes trying to ruin the ending for yourself by figuring out the big twist then you'll have one helluva time with The Ward.
Posted by robotGEEK at 7:00 PM