Review: After the Fall of New York 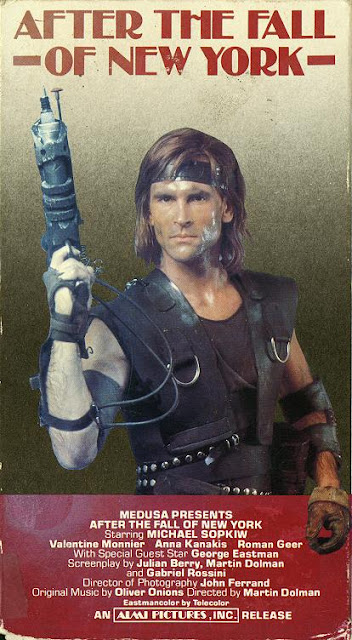 Italian director Sergio Martino (Hands of Steel) directs this Escape From New York ripoff that's so identical to it's inspiration, you could swear you have just seen a low-budget sequel to that film.

When I was a kid I remember seeing this poster all over the local video stores wall. It looked cool, but I don't ever remember actually renting it. But this image has always stuck in my head and when I would occasionally browse old VHS tapes on eBay or Amazon under Sci-Fi, this would always pop up. Only recently I've learned that anywhere else outside of the U.S. it was known as 2019: After the Fall of New York, but here in the states it was always without the 2019 part. Funny thing is when I actually sat down to watch this today the guy on the cover, Michael Sopkiw (Blastfighter) looks  nothing like the guy on the cover. He doesn't wear that outfit anywhere in the film and he doesn't own that cool looking gun that looks like it's attached to his arm. I have to tell you, this leather vest looking getup is so much cooler than the actual and odd coat he wears for the entire film. He does wear that headband though, so that's something. I can only assume the picture they used for the VHS cover was promotional material they shot before they actually got down to filming the movie. But that's just my guess. In either case, I've always liked this image more than the painted poster art they used overseas and for the U.S. DVD release, which I'm actually shocked made it to DVD here in the states, in Widescreen no less.

After the Fall of New York is a solid entry in the Trash/Exploitation world of post apocalyptic films. I didn't enjoy it quite as much as his other entry in this genre, the awesome Hands of Steel from 1986, but it was an enjoyable experience if this is the kind of film you're in the mood to watch. And that's important, at least for me, because if you're not in the mood or mindset to watch this kind of film, you're not going to enjoy it. I think that's why it took me 3 separate times to try and watch it because I can be fickle and I have to be in the right state of mind when I'm watching a film in any particular genre, whether it be horror, sci-fi, action or exploitation. If I'm not in the right mood and force myself to watch a film just for a "review's" sake, I'm just not going to enjoy it.


Parsifal (Michael Sopkiw) is a mercenary forced to sneak into New York to find the only fertile woman left in the world and bring her back so that they can repopulate the planet since there hasn't been a birth of a human being for years after nuclear war. Along the way he teams up with Big Ape (George Eastman), a half man half ape who takes a liking to the last fertile human on Earth and helps to protect her on there quest.


I think one of the things everyone can agree on right from the beginning is that it doesn't try to be anything else other than a ripoff of a huge American film that came out just a few years before, only sprinkled with bits of Mad Max and Flash Gordon for good measure. I mean, the story and structure are almost identical in every way except they change a few details here and there. As with Snake Plissken from Escape from New York, Parsifal is first asked, then forced to do the job of sneaking back into New York (which has been walled off from the rest of the world) to seek and rescue someone and bring them back to the other side. Along the way he meets a few people who help him along the way and inevitably after the first 30 minutes the movie becomes just one big long chase sequence, which is fine because who cares about story or details. The action is relentless and front and center as there's never 5 minutes that go by without a car chase, fist fight or shootout of some kind, which for the most part is handled really well.

Sopkiw does a decent enough job as the Plissken wannabe, though a little too short to play the tough guy hero with an extremely over-sized leather jacket with puffy sleeves that make him look much smaller than he really is. That was a really weird costume decision. On the plus side though, a standout of the film is it's constant use of miniature models. For a low budget Italian flick it had a lot of effects shots, but being that they didn't have the money or technology that we had here in the states to produce them, they went towards model work and I have to give them credit, while it clearly looks like model work, they did a pretty solid job with it starting with the opening tracking shot of a devastated New York and statue of liberty. It would never win any awards for effects work or anything, but you can see a lot of effort went into it and they deserve some props for that. Another awesome element is the fact that the synthesizer score sounds like something right out of an 80's arcade game like Double Dragon or Contra. It lends the film a certain charm and keeps the mood and entertainment value at a fun level. I just kept thinking of 80's arcade games though.

On the DVD there are separate interviews with director Sergio Martino and costar George Eastman (Ape Man) under the "special features" section. George Eastman is asked about his experience with making the film, to which he replies it was "fine". Then he goes on to say that Michael Sopkiw was a good guy but new to the industry, and that's all he says about him which I think is funny since he costarred with him the year after After the Fall of New York in Blastfighter for director Lamberto Bava. He talks like he barely remembers him. Then he's asked if this was the first movie he made for Martino in this particular genre and he goes on this thing about starring for him in another movie around this time with some sci-fi elements but couldn't remember the name of the movie or if it was before or after this film. He says something about a "fist" in the title and that it was like Robocop. Even the interviewer can't seem to remember or even know but they both come to the conclusion that it was Hands of Steel from 1986 and that it was indeed after this film. I just think it's kinda hilarious that he's made so many movies in so many genre's that he can't remember one from the other or that the interviewer, whether he's doing it specifically for this DVD or not, didn't really do his homework. How can you not remember the name of a movie you costarred in?

After the Fall of New York is a solid Trash Cinema/Exploitation flick with nonstop action from beginning to end. Blatantly ripping off the far superior Escape from New York in almost every turn, it's entertaining nonetheless with a certain schlock feel that never takes itself too seriously.
Posted by robotGEEK at 7:40 PM