After watching pretty much nothing but horror flicks these past few weeks (Halloween always gets me in the mood), I am somewhat burned out on that genre and felt I needed some good ol' action to balance it out. This one has been in my queue for months now and I thought now is a good time as any to revisit a film I remember liking a lot back in the 80's and one I felt was a major shift in Stallone's choice of roles.

Nighthawks is insanely badass and such a severely underrated piece of Badass Cinema. We're so used to seeing Stallone play characatures of real people or play characters with super human abilities in films like Cobra, Demolition Man, Rambo: First Blood Part 2, Cliffhanger and a plethora of other films in his awesome career. But in Nighthawks he plays a regular New York City cop with real problems who does mess up quite often like a real human being would, which is really different compared to a lot of the other characters he's played throughout his lustrous career. Nighthawks also marks a couple of firsts for geeks like me who keep tabs on shit like this. It's the first time we see Stallone sport a rockin' beard all the way through the entire film. He had one in the workout montage of Rocky IV, but shaved the sucker when it was time to fight Drago. It's the first time Stallone played a cop in a film. It's Rutger Hauer's first American film. It's the first solo feature directing gig for Bruce Malmuth who many years later would ignite Steven Seagal's career with Hard to Kill. Yea I know Seagal did Above the Law two years before, but that's not the film that made him famous ( I never even heard of that film until "after" Hard to Kill ), it was Hard to Kill.

Rutger Hauer plays Wulfgar, an International terrorist who's fled France and relocated to New York City ready to cause some chaos. Deke DaSilva (Stallone) and Mathew Fox ( Billy Dee Williams) are two undercover cops who, because of there track record and skills at getting the job done, are assigned to a new anti-terrorism task force specifically made to track, hunt and kill Wulfgar as they "assume" New York would be his likely hunting ground for International coverage. Wulfgar is used to getting the upper hand and getting things done his way but may have finally met his match in Deke DaSilva. 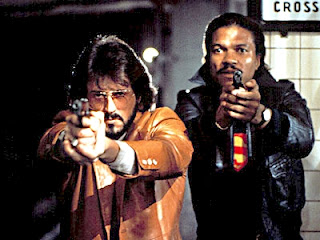 Everything in this film works perfectly. The look and design of the film. Keith Emerson's sometimes funky, sometimes dead on serious score. The hard action/cop thriller tone made famously and frequently during this time. And most importantly, the casting of Stallone and Billy Dee Williams. Stallone steals the show and proves without a doubt that he can play more than an over the top action star. This is Stallone between Rocky II and III and two years before First Blood would make him an international action star. I loved how he looked in this film. Just check him out with that big hair, oversized tinted specs and leather jacket. 1981, gotta love it!
Sad thing is that this type of film, while rampant in the 70's to early 80's, wouldn't make it to the theater these days which is sad. It's an intense story and character driven film and those unfortunately aren't the type of films producers or studio's want to waste there money on promoting these days. Now it's all about spectacle, budget and how to outdo the previous years biggest picture.
While there might not be any special effects or huge action set pieces in Nighthawks, this film grips you right from the beginning and doesn't let go until the very last frame because it's made so damn well from David Shaber's (The Warriors) razor sharp script to Bruce Malmuth's no frills direction.

There's a scene in the film where, after Wulfgar has fled to New York after having plastic surgery to change his face, DaSilva and Fox are in a nightclub after learning that Wulfgar has a pattern of picking up pretty girls at nightclubs and using them for a place to stay. After learning he's recently had plastic surgery they're not sure what he might look like, but scour the nightclub anyway after following a tip that he picked up his last victim there. DaSilva (Stallone) thinks he spots someone who "could" resemble Wulfgar and within a minute Wulfgar and DaSilva lock eye contact for what seems like forever to The Rolling Stones "Brown Sugar"* before a shootout ensues. That scene makes the fuckin' movie for me. It's intense and brilliantly staged and sets the overall tone for the entire film. I loved that sequence.

I remember seeing a couple of different interviews back around 1997 after the failure of Judge Dredd, The Specialist and Assassins, but before he started doing DTV stuff that he wanted to shift his career and get more into films like Nighthawks and Daylight. Films that were more about the characters than action. I guess feeling his big budget movie choices were waning he wanted to shift gears and concentrate more on story driven films. I think he tried and succeeded with Copland, but the majority of his efforts fell into the DTV world before revitalizing his career all by himself by writing/directing/starring in Rocky, Rambo and The Expendables. Good thing too because we definitely needed some more badass Stallone in our cinema's.
Rutger Hauer is of course awesome as the villain Wulfgar. He hadn't yet made the splash he did in Blade Runner, that was the following year. But as with every role he chooses, he delivers the goods and turns in a creepy performance as the terrorist Wulgar who can kill randomly, willingly and often, but stops when it comes to babies as in one standout sequence in a cable car when Wulfgar demands the asshole cop (DaSilva) come retrieve the baby because he doesn't want the headlines to read "Wulfgar: Baby Killer".
Billy Dee Williams (yes, Lando Calrissian himself) plays DaSilva's wisecracking partner Fox with just the right amount of smoothness that made his portrayal of Lando Calrissian such a standout character. Top notch work from everybody involved.

Most people have heard of this film but have never seen it, which is such a travesty because this film easily ranks as one of the best cop thriller's to come out of that era. I think Stallone will impress anybody who thinks he's just a larger than life action hero with his role in this film. Do yourself a favor and check this sucker out and tell me that nightclub stare-down between DaSilva and Wulfgar doesn't give you chills.

* Depending on which version you watch as different releases of this film had different music for that sequence. The theatrical version contains The Stones "Brown Sugar" as well as the full frame Good Time 2001 release. But the 2004 Universal Widescreen release changed that song for some reason. Maybe copyright issues or something like that. In any case, The Rolling Stones "Brown Sugar" playing to that sequence makes such a drastic difference and it's a shame Universal changed it for the most recent and far superior in quality release. Currently it's available on Netflix Instant "with" the classic Stones song intact. So see it while you still can.
Posted by robotGEEK at 2:01 PM