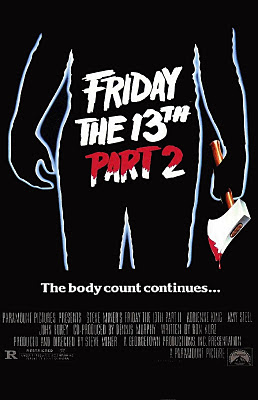 Feet. If there's anything I will take away from watching this film it's the enormous amount of "feet" shots found in here. Remember how in the last film since the identity of the actual killer was a secret till the very end they had to do imaginative camera work so that we couldn't figure out early who the killer was? In the first films case it was "first person point of view" camera shots. An insane amount of them. But let's be honest, if they had shown any part of the body of the killer at all we would've figured out right away it was a chick and maybe that it was even Jason's crazy mother. But here director Steve Miner instead decides to go with feet shots and a whole lot of them. For most of the film when they want to show the killer, it's usually just his feet or his hand, but mostly his feet with lots of walking. Lots and lots of walking. They even throw in some random shots of other people's feet walking here and there just to trip you up and psych you out so you can think "is that the killer?". Clever devils.

I've never been a fan of Steve Miner as a film director. I've never felt he had any identifiable style or anything that could prove he was at least visually any better or more inventive than the next guy, and that is completely evident in the lame camera work during the opening sequence when the heroin of the first film, Alice Hardy, is at her home alone doing mundane things like walking from room to room doing nothing in one long and boring tracking shot. Were we supposed to think it was a first person point of view kind of thing to invoke tension or suspense? I'm not sure, but it doesn't work. It's just boring and executed poorly.

Coming out exactly one year after the first film in this series, Friday the 13th part 2 really offers nothing new to the franchise, unless you count the skinny dipping in the lake bit and the start of the gratuitous nudity in these films, but I ain't complaining!
A bunch of young camp counselors are at Camp Crystal Lake "again" even though they've been warned repeatedly about what happened 5 years earlier and that they should stay away. And again, one by one they get killed off in slightly more creative fashion than the first film. This time though it's Jason doing the killing as he saw Alice behead his mother by the lake at the end of the last film and has vowed revenge on anybody coming anywhere near the lake since his ramshackle home is located deep in the woods nearby. Only he first needed to kill Alice for killing his mother in the opening sequence of the film.

I hadn't seen any of these original films in so long that I'd forgotten that he still doesn't get his trademark hockey mask in this one, which was kind of a let down because you know, you go into a Friday the 13th film thinking you're going to see this big hulking indestructible half man/half child with a hockey mask hacking naked horny teenagers to pieces. I guess that doesn't start until part 3 or part 3D, whichever one I end up watching since both versions (complete with 3D glasses) are available on the Deluxe Edition. Instead he wears a burlap sack with one eye cut out over his head. It's a fairly entertaining and straight up slasher pick nonetheless and for the exception of the hockey mask, offered pretty much what I was expecting. The gore and violence was a little more tame than what I was expecting, but I realized after the opening credits that gore master Tom Savini wasn't involved with this one, which would've made a big difference I think. But even so, there are a lot of sequences that just feel "cut" short of there intended potential. The nude couple on the bed having sex before Jason comes in with a spear and spears them both to death right through the bed for one. That was probably the most obvious one and to be honest, if there was a chick from this film that I wanted to see nude more than any other, it was her. And that's the scene they cut! Blast the MPAA of 1981!

I know it sounds like I'm doing nothing but complaining about how bad this film is, but I actually did enjoy it quite a bit. All in all, for the most part it's an entertaining average early 80's slasher flick. It's exactly the type of film you'd expect to go in seeing and you won't be disappointed. And as with the first film, Harry Manfredini's score makes this sucker pop. It just wouldn't be the same with anybody else taking a stab at the score and I doubt it would have been as seering and as catchy. Even during the most mundane moments, it's the score that keeps you interested in what may or may not happen next in these films and the guy needs to be commended for that.

So let's talk about the ending. Does it make sense to anyone? What the hell happened to Paul? Did he get killed or not? Was it a dream? Was he even there? And that very last shot of Jason's dead mother's head sitting on the altar Jason fashioned at his shack in the woods. The camera zooms in on it sitting on a table and it's clearly not a dummy head, but an actual person in makeup with there head resting on the table. You expect something to happen as the camera zooms in but instead the image freezes before the credits roll up. Wha???
In the special features they say that the director had originally wanted the eyes to open as the camera zoomed in on it, but decided against it at the last minute feeling that it looked hockey and didn't have any real impact. But what was the "opening of the eyes" even supposed to say? I think they should have just left that sequence out completely since it didn't leave any lasting impact either way. Good job Steve Miner. I know he went on to do part 3 as well, so I'm not exactly jumping with joy but I hope it's a little more creative than this one and not an almost exact remake of the first one.
Posted by robotGEEK at 5:11 PM