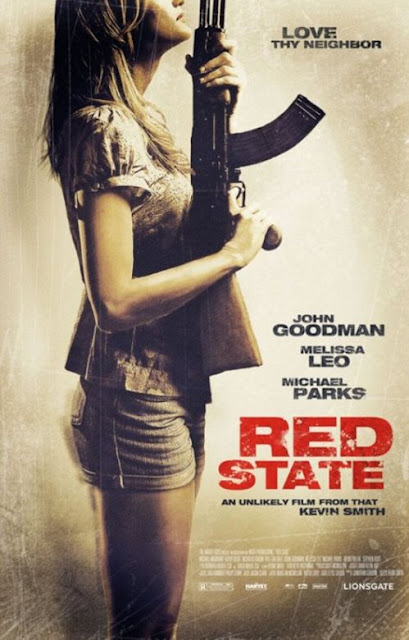 WARNING!
First thing you should be know before continuing to read on is that this review is "full" of spoilers and if you haven't seen it yet or just don't want the premise to be spoiled for you, then you probably shouldn't continue reading on because there is no way I'd be able to write anything about it without giving anything away. It's just one of those kinda films. Also a quick note, you can check out my buddy Ingo's excellent review of this film here over at his movie blog Hellford 667 Movie Reviews. We both pretty much feel the same about it and it hit on all the same marks for both of us.

There are both good and bad aspects about Red State that have divided critics and moviegoers right down the middle. For me, I'm still not sure how I will ultimately feel about it as there were things I both liked and disliked about it, but for the most part as of this writing I liked it quite a bit.

For the most part I enjoyed it. This is unlike anything "obviously" Kevin Smith has ever done and if his name wasn't attached to it, I'd swear there was a better more experienced director behind the camera. The style he chose to use for this particular film works well the this kind of genre and while it was 95% hand held shaky cam style of camera work, I have to admit it looked pretty damn good even though most of you know I hate that shit. Here he chose to use a washed out filter that gives the film almost a vintage and muted look, but only adds to the sense of dread that he builds up for the first half of the film. And that's an important fact because as most people know after seeing this is that Red State ultimately becomes almost two separate types of films divided by the halfway mark. The first half is a thriller more than anything, and the second half becomes a siege type of film where the FBI and the occupants of the compound commence in a standoff and then a shootout as the FBI seriously fuck up and after receiving orders from the higher's up decide to shoot to kill with no witnesses.

Three high school boys answer an online ad for an orgy. Once they get to the home of the woman who posted the ad she advises them to get drunk first, only the boys have no idea that the alcohol has been spiked and knocks them out. When they awaken they are stripped and held prisoner by a radical fundamentalist preacher (Michael Parks) with a sinister agenda who uses his small congregation to lure unsuspecting "sinners" who he feels are the reason for the worlds demise and kills them. At the same time the FBI have been on to the preacher for years and after receiving important intel, ascend on the compound in what is supposed to be a simple arrest over an "arms" charge.

As a thriller Red State works tremendously. In all honesty, it's probably one of the better thriller's I've probably seen all year and while you watch it you just can't help to think that the guy who has given us Clerks, Mallrats and Jay and Silent Bob made this well crafted thriller. The blood is plentiful and the violence, when there is violence, is well executed and as realistic and gory as it could possibly be; a definite plus in my book.
But on the negative side it's a pretty big "bait and switch" as it's been erroneously marketed as a horror film. I'm sorry, but this is "not" a horror film, not even close. It does possess some pretty nifty and unsettling moments of suspense, shock and awe, but for the most part there's nothing scary about it. Also, Netflix Instant currently has this available under there "new releases" section and in part of the description it specifically states that 3 high school boys come face to face with a supernatural force. What a huge letdown to find out that that is 100% positive false advertisement in terms of the "supernatural" part of it. I hate to be the bearer of bad news, but that's the truth and I don't think they should market this as a horror film and state that there are supernatural aspects to it when in fact, there are not. That would be the single most aspect that I did not like about it though. Another would be too much talking (a la Quentin Tarantino) and way too much preachiness about church and whether or not homosexuality is wrong. I know it's an important part of the story but it almost felt too much like Smith was trying to say something about his personal view on it.

But really, those are the only things I didn't like as the rest of the film works pretty well. In a lot of aspects it reminded me a lot of From Dusk Till Dawn, how right at the halfway mark it turns into a completely different kind of movie. FDTD starts off as a action/suspense thriller and once they hit the bar, it turns into a full on horror film. Red State starts off as an eerie suspense thriller before turning into something like Assault on Precinct 13 (the original) as once the FBI get involved it becomes a siege. I actually enjoyed that part of it, how it ultimately turns into two separate films. I just wish I hadn't been waiting for the "horror" and "supernatural" elements to come into play the entire time I watched it as that's how it's been falsely advertised. I probably would've enjoyed it a whole lot more if I hadn't. But in any case, it was a really solid effort on Kevin Smith's part and definitely his most impressive effort to date. After seeing the stylistic choices he made and the talent displayed behind the camera on this film I have no doubt in my mind the guy can pull of a serious zombie film some day, or even just a flat out horror film. I would really love to see that.

I don't think I need to go into the cast because with the talents of John Goodman as an FBI agent, Melissa Leo as the preacher's daughter and the one who lured the young boy's and Michael Parks as the radical preacher, you know they deliver and it's all outstanding performances from each and every one of them, Parks in particular who I haven't seen been given a role before this to shine as bright as he does here.

Since it's currently available on Netflix Instant, I say give it a shot while it's still available and check out Kevin Smith's most important cinema effort to date. The guy impressed the hell out of me here stylistically and at least in my eyes, has redeemed himself after Cop Out.

On a side note, please allow me to vent a little on the whole Netflix thing. I know a lot of people are pissed and have been fuming (even canceling there subscriptions in protest) over the whole Qwikster debacle and how they've raised there rates and were at one time considering separating there services and all that. To be honest, if it were not for Netflix or Netflix Instant I would never have the opportunity to see most of the films I've seen these past few years. It saves me a trip to the local video store (of which as of this date there is only 1 left), and offers me films that I would never even find at a video store and would ultimately have to end up purchasing otherwise just to see. And currently I'm not in a financial position to buy every movie I want to see, especially if it might be bad or just ok. So even if they had done the whole Qwikster thing, I would have just gone along with it because in the end, the small fee I pay every month to watch unlimited movies in every genre is still worth it to me. They recently raised there prices and I still think it's fair and a far better deal than singly renting films for $5 a pop at the local video store that you only get to keep for 1 night. Hell, even Redbox just announced a raise in there fee's and once they hit that first jump of getting us to rent them for more than $1 in our mindset, it'll only be a matter of time before they keep raising them. Thanks for letting me vent and remember, they are just "my" opinions and nothing more.
Posted by robotGEEK at 3:05 PM