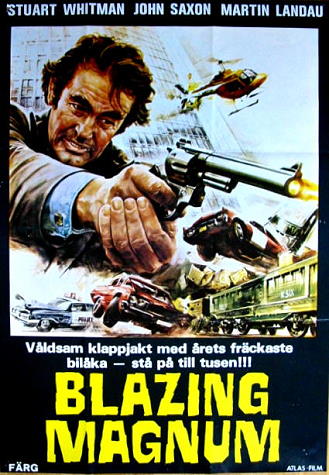 Now this is a film that has completely escaped my radar until now. I've never heard of it and knew nothing about it until I accidentally came upon it browsing on eBay a few months back.

Blazing Magnum aka Shadows in an Empty Room is pure 70's hardcore genius. Take the best episodes of  Law & Order and the best parts of Dirty Harry, Magnum Force, The Enforcer, Bullitt, To Live and Die in L.A. and The French Connection and you have this brilliant Italian production from 1976 that boldly and oddly mixes gaillo thriller with hardcore police action. After Dirty Harry, I know a lot of these kinds of films were coming out left and right around this time, but how this one has not landed on the "cult classic" list is beyond me.

I think what makes this film work so well is the unorthodox pairing of well known U.S. actors with Italian supporting actors and just the fact that behind the scenes, it's a head to toe full on Italian production with all the trimmings. Everything comes together so perfectly here from Armando Trovajoli's music, Alberto DeMartino's bold and in your face and cutting edge direction to Whitman, Saxon and Landau's brilliant casting. Honestly, had this been made in the U.S., it wouldn't have been nearly as violent or as hardcore and gritty as it is here.

Detective Saitta (Stuart Whitman) is too busy busting the heads of bank robbers one day to take a phone call from his seemingly upset sister. Later that day she dies at a party after falling ill and taking medicine given to her by her doctor, who also happens to be her lover. Soon Det. Saitta, who blames Dr. Tracer (Martin Landau) for her death and aided by his partner Sergeant Mathews (John Saxon) is on the case doing whatever it takes to get answers even if it means busting heads or blasting bad guys with no code of conduct apparently in place. His sister is dead and he's getting to the bottom of it. What he uncovers is a complicated web of lies, deceit and double lives that shake the very foundation of what he always believed to be true and learns that the people closest to you are the ones you know the least.


The story, as simple as it sounds, gets way more complicated and I often found it hard to keep track of all the characters and "possible" suspects. But towards the second half you start to familiarize yourself with the names and it does't seem as hard as it is in the first half. What I love most about this is that it could easily have gone either way in terms of category. For the most part it plays out like a really well written episode of Law &  Order: Criminal Intent, but then outta nowhere they throw in some insane action sequence or an unbelievable car chase. In the beginning when we're introduced to the main character Det. Saitta, he's in the middle of chasing a bunch of bank robbers through the streets of Canada in a crazy ass car chase until they crash and he blows all of them away with his magnum. As an introduction I thought this sequence was gloriously over the top in terms of violence, and then it turns back into a cop thriller only to be interrupted regularly by shootouts, fist fights, foot chases and in one standout sequence right smack in the halfway mark, one of the most incredible car chases I've ever seen on film. I shit you not, it easily rivals any from Bullitt, The French Connection and even To Live And Die in L.A. That car chase is insanely brutal, amazingly long and stunningly choreographed and shot. Because of these awesome bits of action and violence, this could easily have been another awesome piece of hardcore cop cinema from the late 70's. A type of film they just don't make anymore.

Stuart Whitman, who I'd never heard of before, does a bangup job as the hard nosed detective who would rather use his fist and magnum revolver to get answers than asking simple questions. Though I was surprised that he was a little older than the usual gumshoe for this kinda film, he was a badass nonetheless and certainly left an impression. John Saxon, who plays his partner, oozes cool no matter what he's in. The guy is just awesome. I actually thought he would have been the obvious choice for the lead and was surprised he played the subdued partner rather than the violent, edgy and impulsive Det. Saitta. Martin Landau always delivers the goods and he doesn't disappoint here. As the accused doctor, he exudes an aura of sadness, confusion and disappointment having not been able to do more to save his patient and lover.

One standout of the film is Armando Trovajoli's brilliant, and I mean brilliant score. I swear, I still can't get that tempo out of my head. The music he's created in here is pure 70's gold. Like something the brilliant Goblin would've turned out had they been given the job to score this film. When it was over, I even had to check the credits and make sure that it wasn't Goblin because I thought it was for the most part.

When it was all over, I actually enjoyed this more than the tent pole film of this genre, Dirty Harry. I thought it was made better, more violent and though it kept shifting genre's from thriller to hardcore cop action, the pace  was steady and the actors just plain badass.
Blazing Magnum delivers the goods on all fronts and has easily landed on my list of all time favorite cop action films.
Posted by robotGEEK at 5:30 PM