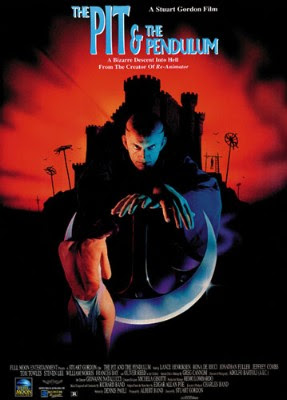 I've always been a so-so fan of director Stuart Gordon. I'm a huge fan of Re-Animator, From Beyond, Fortress and even Robot Jox (just for the sheer B-Movie campiness of it all). But films like Dagon, Castle Freak and King of the Ants have left me severely underwhelmed. When I see those films, I don't see the brilliance that was behind his earlier work, most notably the one-two punch of Re-Animator and From Beyond. The Pit and the Pendulum I feel falls into the category of "missed opportunity". I think mainly because my expectations were a little high. I think because I assumed since it was a Stuart Gordon film and it dealt with a gothic tale from Edgar Allan Poe that a blending of the two would result in a gory and bloody retelling of the Pendulum story. To my surprise, there is very little blood in this film. Instead it looks like Gordon's attempt at making an honest to goodness straight up period piece with a pretty decent story, but on a very low budget. It all looks ok for the most part. Though on an obvious limited budget the sets, scenery, costumes and even restrained camera work all look pretty good; not impressive or anything, but much better than you would expect it to look.

Synopsis via Wikipedia:
Set in Spain, 1492, Grand Inquisitor Torquemada leads a bloody reign of terror, torturing and killing in the name of religion. Upset with the way the Church is practicing torture, Maria speaks out during a public burning and whipping of a title-stripped family. Maria's own beauty leads Torquemada into temptation and brutal atonement. Confused over his desires, he accuses Maria of being a witch and to be tortured until confession. During Maria's interrogation, Torquemada cannot help but to stare at her naked body leading him to order her put in the prison. Imprisoned, Maria is befriended by Esmerelda, a confessed witch. Together they struggle to save themselves from the sinister Torquemada.
Outside the castle walls, Maria's husband Antonio breaks into the castle to rescue his innocent wife. After a failed escape, Antonio is imprisoned for his actions and Torquemada decides to test his new machine of pain on him; The Pit and the Pendulum.

I remember seeing this when it first came out on VHS back in 1991, but couldn't really remember whether I liked it or not. For the most part, if I can't remember whether I liked a film or not then it's safe to say that there was a reason why it never left a lasting impression on me. On the plus, I liked all the talent and hard work that went into creating this gothic world and how good everything looks, but on the negative side I found it all very bland and boring. I still think most of it comes from my expectations of thinking I was going to see a "horror" film from master horror director Stuart Gordon based on a legendary story by Edgar Allan Poe. Instead what I got seemed more like a drama than anything else with absolutely no horror elements anywhere and nary a drop of blood. So you can say I was pretty damn disappointed when it was all over.

One thing that this film does have going for it above all else are it's two leads, the great Lance Henriksen as Torquemada and the incredibly beautiful and sexy Rona De Ricci as Maria, the woman Torquemada brandishes a witch who he demands to be arrested, tortured and tried for the crimes of witchery but who he ultimately becomes obsessed with.
This is Lance Henriksen at his finest. Though he pretty much rules in almost every single film he's ever been in, it's here where he's really let loose delivering an eerie and over the top performance as the tortured Grand Inquisitor Torquemada. Rona De Ricci, who amazingly has only ever made 2 films in her career, is simply stunning as the bread maker with a heart of gold Maria. The girl can certainly act and given the fact that she appears nude often, the very fact that you can even remember she can act is a testament to her natural talent. I have no idea why she never made anything else after this film, but I'd sure love to find out.

I know this film has a lot of fans, but considering the source material and the talent in front of and behind the camera, I would have expected something more grande that delved much further into the horror genre. Lance Henriksen delivers a performance of a lifetime and raises this film from just above obscurity, but in the end it doesn't save it.
Posted by robotGEEK at 9:11 PM