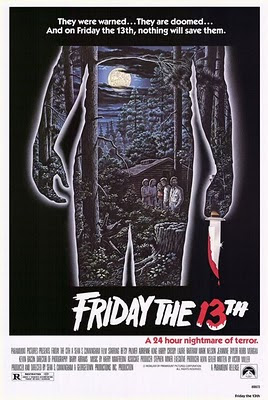 One of the things I love most about October, besides the fact that Count Chocula (my favorite cereal) is easily available again, is the fact that you can get classic horror films pretty cheap. Speaking of Count Chocula, I think it sucks that I have to wait till October to be able to eat easily one of the best cereals ever made. What's with that?! Who does't love Count Chocula? Make it available all year round people!
Sigh, but anyway. All the major labels either repackage standard horror DVD's from there library and make them really cheap, like $5 to $10 or if it's a title that's been out for a little while, they'll simply mark them down considerably. I love that. So as I was browsing my local Wal-mart I couldn't pass up the chance to snag the first 4 films of this series in one awesome DVD set for a mere $10.

I'm going to be completely honest here, and I might lose a little of your respect in the process. Up until last night, I have never seen this film all the way through. Honest to God. You know how it is? Sometimes there's just a film or two that no matter how big or how important they are, simply escape your viewing experience. This is that film for me. I've seen it in parts, but never completely or all the way through. I don't know, it's just one of those things. Like with Jaws. I only barely saw that from beginning to end just about 6 months ago. What a great film. But I never felt the need to seek this one out. I certainly knew the story already and how it all unfolds. I think it might be the fact that I knew it wasn't really about Jason and it wasn't this big scary guy with a hockey mask running around butchering over-sexed teenagers. Instead it's about his psycho mom who just can't let shit go.

But it being Halloween and all, it gets me in the mood to get more into the horror genre, more than usual anyway. This was a pretty great little slasher film. It's solidly directed by Sean S. Cunningham and has a pretty decent cast to boot. Tom Savini's makeup effects are of course awesome but there was something that I couldn't help but notice as I was watching it. Even with all the suspense, camera tricks and makeup effects, the movie really wouldn't have worked at all if not for the incredible score by composer Harry Manfredini. I'm sorry, but the music made the movie for me. I know I might get some flack for that, but come on. You don't see who the killer is until the very end of the movie. It's all first person point of view shots whenever the killer is out murdering the teenagers. A lot of what makes the movie works is what you don't see. It could be anyone or anything out there in the dark knocking off these kids one by one because when you don't see the killer, your mind can run wild with possibilities. But in this case, it's a little old lady with a split personality who turned psycho when her son drowned at Camp Crystal Lake. And you know the deal with psychos. They have twice the strength as mere mortals when they're crazy. She blames the counselors for not being there to save him, but come on, if the kid knew he couldn't swim why the hell did he go all the way out there in the lake by himself. But if you don't have a great score to create that sense of dread and suspense, then it's just not gonna work. And for me, it was the music that stood out more than anything as I was watching this. To be honest, it reminded me a lot of the Jaws theme and it worked beautifully.

There's really not much else to go into. You know the story and you know how it ultimately plays out. It was a nice little horror film made all the better by Tom Savini's makeup effects and Harry Manfredini's score. I found the first person point of view a bit tedious after the first 4 or 5 deaths, but what else are they gonna do to keep the identity of the killer secret until the very end. It was a gimmick that needed to be implemented in order for the big reveal at the end to pay off, and for the most part it worked. One thing that drove me nuts though was in the finale when Alice and Jason's mom were battling it out in the end, Alice always seemed to get the better of Mrs. Voorhees as she's obviously like 30 years younger and faster. But she'd always just get like one good hit in and she'd just stop, stare at Mrs. Voorhees thinking she's dead and walk away. Except the super human psycho mom gets right up and goes at her again when she turns her back time after time. I swear, this must have happened like 5 times in that final fight and I kept screaming at the television "Stab that bitch in the heart or something!". It would have saved her a whole lot of more fighting and physical pain if she had just finished the job and made sure she was dead the first 2 or 3 times she came right back at her.

I'm glad I finally got to see this completely and am now on a quest to see every single one in there proper order this month. So far part 4 still seems to be my favorite, but I'm eager to see all of them again and see if my favoritism still holds up. There are parts or ideas that I like in almost every single one of them, except part 5: The New Beginning. Sadly that's another one I've still never seen. Again, I think it was because I knew it had nothing to do with Jason Voorhees. Why do they do that? Remember Halloween III?
Posted by robotGEEK at 5:20 PM