Review: Army of One 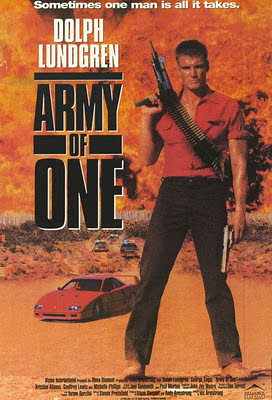 As much as I love me some Dolph Lundgren, I'm shocked that I've never seen this film until now. I only recently heard of it maybe in the last year or so and like a lot of films on my radar, I just never got around to watching it.

Army of One aka Joshua Tree is such an interesting film. First of all, let me get right to the point. As an action film starring the great Dolph, this film kicks some serious ass. I just needed to get that out of the way so you knew where I stood on it before I got into all the boring statistics and stuff. This came out when he had started coming out in direct to VHS stuff, but to where it wasn't yet his mainstay. Up to this point, he had still come out with I Come In Peace, Showdown in Little Tokyo and Universal Soldier, but it seems with this and almost all of them after it was all for the home video market. But I'm telling you, I'm shocked this didn't make it to the theaters because this is a pretty badass straight up action flick and to be honest, better than most of the stuff he has come out with in the last 15 years or so.

Wellman Santee (Dolph Lundgren), along with his partner, is transporting stolen sports cars when he's pulled over by a state trooper. When the trooper sees that Santee's partner is carrying a weapon a shootout occurs where both the deputy and Santee's partner are killed. Framed for both murders Santee is sent to prison where he escapes a few months later after he realizes he's about to get murdered by the guards who he feels were paid off. In escaping he kidnaps a girl at a gas station so he can steal her truck and is on the run with his hostage as a manhunt ensues led by the totally weird Lt. Severance who seems to have his own hidden agenda as to why he wants to stop Santee.
Meanwhile, Santee is out for revenge as well as trying to clear his name and for a good portion of the film is unaware that the girl he kidnapped is actually a Deputy Sheriff. Lots of shootouts, car chases, fist fights and of course, romance ensues for one bloody, violent and exciting straight up action flick.


I think the thing that surprises me most about this is that it's the only "film" directed by legendary Hollywood stuntman, stunt coordinator and second unit director Vic Armstrong, and it looks so good! It seriously reminded me of an amateurish Craig R. Baxley, another legendary stunt coordinator and second unit director who ventured into feature film directing for a very brief period and ended up directing 3 of my most favorite action films ever with Action Jackson, I Come In Peace and Stone Cold.  But this is the only film Armstrong did before going back to TV work. I don't know why because it looks great with plenty of stunts, blood and violence with style to burn.
One standout sequence is when Santee takes out an entire fleet of bad guys in a warehouse full of Ferrari's and Lamborghini's reminiscent of something out of a John Woo film, only less polished. I'm telling you, this sequence is insanely awesome and long, violent, brilliantly choreographed, shot, edited and bloody as hell.
If you were ever unsure of Vic Armstrong's talent as an action director, all you need to see is that one sequence to calm your fears. But that's just one, because this film is filled with so many badass car chases and shootouts. And one of the things I love also is that when somebody gets shot, which is often, you're always going to see the shot land and an actual squib involved. A technique often practiced back in the day but not so much anymore as most of the time they'll just digitally render bullet wounds and impact shots. Such a lazy way of doing it now.

Lundgren gives a really solid performance as the guy on the lam with a really bad attitude out to clear his name. But the dude is not a nice guy by any means. He's mean, tough and has no problems hitting a woman or even a kid in one scene. That scene kinda blew my mind a little. He meets up with the widow of his old partner who died in the beginning of the film and her son so they can give him some guns and a vehicle. When Santee (Lundgren) finds out the kid, who is maybe 13 or so, stole the vehicle in a fit of anger Santee punches the kid in the chest as if to say "What the hell are you doing with your life? Do you want to be like me? I'll be dead by Saturday!". Which he does in fact tell him in a speech a few minutes later but I was kinda blown away at how hard he hits this kid square in the chest. Seriously, you can see it all over the kids face.

If I had any complaints it would be that I felt George Segal as Lt. Severance was a little miscast. I don't know, I just could't buy him as a tough cop, especially with that ridiculous bush mustache. He played him a little crazy and constantly on edge, but I know him mostly for comedy and I just couldn't get past that anytime he was on screen.
Also the name Joshua Tree. I know it's known under this title mostly and is only known as Army of One for it's video release in the U.S., but I hate that Joshua Tree title. It makes it sound like a drama or something and this is anything but. Joshua Tree refers to a location in the film that's mentioned maybe twice, but not enough to call an action film starring Dolph Lundgren. Really glad they changed it for it's U.S. release. Army of One sounds much tougher and cooler for this kinda flick.

This is a great all around straight up action flick and definitely ranks as one of my favorite all time Dolph Lundgren films. It does slow down from time to time but never long enough where you get bored because director Vic Armstrong spices this film with so much action and violence (all done extremely well I might add) that it's definitely a ride worth taking.
Posted by robotGEEK at 1:00 PM