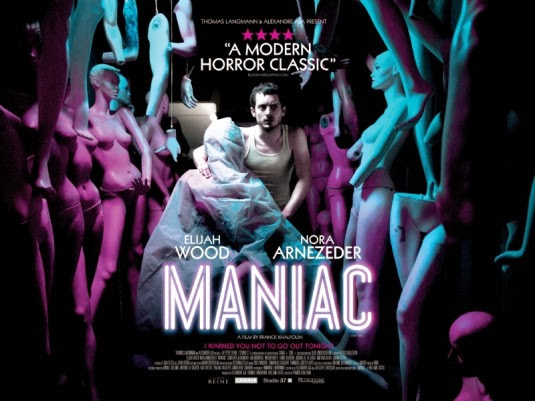 I'll be honest, I'm a little torn with this one. Maniac (2012) has just as many good qualities as it does bad, so trying to find the right balance in how I ultimately feel about it will be a hard one to pin down. That's a hard thing to admit to considering how excited I was to see this. And this is coming from someone who generally loathes remakes. But I figured with Alexandre Aja (High Tension, Piranha 3D) both penning and producing and original Maniac director William Lustig on board also as a producer, it couldn't be horrible right?

Hhmmm, I still don't know. On one hand I like that instead of doing a full blown remake of the original classic, they tried something different with the "first person POV" angle, which 99% of the film being shot that way. Don't worry though, it's not shaky-cam bullshit......it actually looks pretty decent, only ever really seeing Frank in reflections or in mirrors; a very tricky and cool technique and one that they pull off really well for the most part. They also infuse the film with a really stellar 80's synth infused score, reminiscent of Drive and the second half of You're Next. The effects work is also done really well, but none of it really stands out the way some scenes do from Lustig's original film, with Tom Savini on makeup duties on that one. Yea there are some scalpings, and a cool scene involving a butcher's knife, but I don't really recall any particular scenes that knocked my socks off. And lastly, I gotta give major props to Elijah Wood for turning out a pretty chilling performance. I'm not saying he made the film or anything, but as much as I was opposed to seeing him take over the role that Joe Spinell embodies so perfectly as a man struggling with childhood abuse issues and taking out his anger towards women, I felt Wood did a damn fine job, if you can wrap your brain around the fact that he was a hobbit for so long. It's a different take on the character obviously since they look so drastically different, but as a psycho with mommy issues, Wood will surprise a lot of people. Or maybe he won't. To each their own.

On the other hand though, did we really need a Maniac remake? I dug how director Franck Khalfoun took a different approach by shooting "first-person point of view", but it didn't always work. Mainly because as you're seeing the film through Frank's (Elijah Wood) eyes, you pretty much know what the fuck is going to happen right before it happens. There's really no mystery involved. He hates women because his mother was a whore, so he kills them whenever he can. But placing the viewer through the killer's eyes takes away any sense of tension. You know he's about to kill someone before he even does it. And going back to a comment I made earlier, while the effects work was good, there wasn't any kind of "wow" factor....nothing that stood out. For example, remember that scene in the William Lustig's original Maniac where Tom Savini is in a car trying to get it on with a babe when all of a sudden Frank shows up with a shotgun out of nowhere and blows his head off through the windshield? Was that really necessary or integral at all to the story? No, but it looked fuckin' awesome! And we still talk about it to this day because it was so unexpected and brutal. There's none of that here.

Director Franck Khalfoun also took some liberties with the POV shots. Every so often he would actually pull the camera away so you could see what Frank was doing to a victim. It's not a big deal, but when the film is supposed to be seen through the killer's eyes, it's an odd artistic choice considering 99% of the film is shot POV. This is also where some of my issues also lie. For the first act of the film this look is sleek and inventive, but halfway through begins to get tedious and uninteresting. It's hard to make a film look stylish when it looks like you're playing a game of Doom or Call of Duty.

All in all a bit of a letdown for me, which is a shame because I really wanted to like it considering the talent involved behind the scenes and all promotional artwork for this has been pretty stellar. While I will probably never see this again, I will be picking up the amazing soundtrack by Rob immediately. It's that good.
Posted by robotGEEK at 9:56 AM