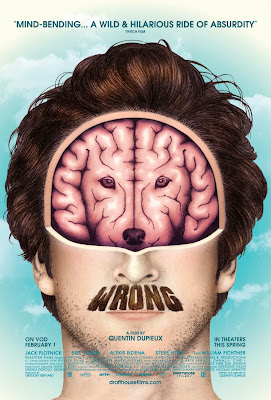 If you've read my review of Rubber, director Quentin Dupieux's previous film from 2010, then you will pretty much know how I feel about this new film. Instinctively, I feel about the same way. I'm finding these films by Dupieux to be extremely frustrating, because whether you like them or not, you can't deny the talent involved; yet at the same time, they're never as good as they should or could be. With both Rubber and Wrong, you can see he possesses an undeniable talent behind the camera; quite frankly both of these films look amazing. But it's with their level of absurdity that seems to get under most peoples skin, including mine. I'm all for ridiculous and absurd films, in fact I love them when they're "ridiculous and absurd" films. Dupieux's films however try so damn hard to convince you that while they are in fact absurd, they are also clever, and for me, that's the most annoying part of his films. They could very well be good in their own right, weird-yes, but decent little films. Yet he keeps throwing in your face that things don't have to make sense and things don't have to be explained. Weird shit just happens so we should just accept it. That's all fine and dandy, except the weird shit that he has happening in his films are not based in reality. Sure odd and strange things happen all the time, but the unexplainable things that go on in his films are so absurd that rather than go the David Lynch road - where things are weird, surreal and strange yet after careful analysis, answers and/or a hypothesis is often produced - he decides to just go full on "I'm smarter than you are and so I don't care if you understand my films or not".

Much like Rubber, Wrong isn't a total loss though. It looks great for one. Quentin Dupieux is an extremely talented visual filmmaker. With Rubber he gave it a darker exploitation type of look, yet sleek and incredibly inventive. With Wrong he gives this film an extremely professional and polished look, yet sustaining a lot of his trademark style. It's cleaner and it works effectively well for this type of story. The cast is pretty spot on also, with William Fichtner obviously stealing the show. It's sad that his part isn't bigger though. His character is often talked about throughout the entire film, yet you only actually see him in a handful of scenes. And it's with these scenes where Wrong really comes alive. It's moody, hip, atmospheric score also set's the tone rather well.

So right there, you've got 3 things that work in it's favor. But it's really it's "What the hell am I watching?" vibe that is it's ultimate downfall. This is an extremely slow film. Billed as a dark comedy, it's just not. Actually, I wouldn't know what to call this. A surreal drama? It's not funny that's for sure. Even the absurd elements just kind of leave you confused and scratching your head more than making you laugh or even crack a smile. And you know, I can enjoy a slow moody film any day of the week. In fact, as the trailer makes this out to be a surreal trip, I actually found a good chunk of this film fairly cohesive. Yes it was slow and odd, but you could tell what was going on. That is until the very last act, when you're sitting there and the only thing running through your head is "Uuuummmm......what?".

The bottom line is that while I can dig these kinds of films from time to time, this one felt like a missed opportunity. While it looks great, it's too slow and dull to keep you interested. At least in Rubber, you have a fucking tire rolling around killing people. Here the main character is looking for his lost dog and in the process, encounters a random array of unusual characters. But nothing ever really happens, except for the constant head scratching when you're trying to figure out what it is you're supposed to be watching, because it's certainly not funny, not even in a subtle way. Sadly, the best part of this film is the trailer, which looks a helluva lot better than the film ends up being.

Posted by robotGEEK at 7:19 PM