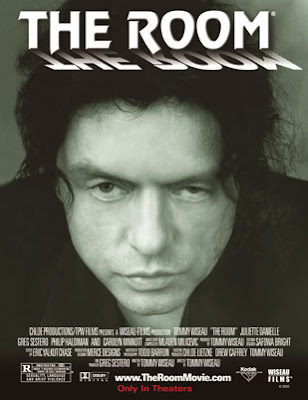 Every so often a movie comes around that words alone cannot describe. I've been hearing about this film for quite some time, and decided it was about time to see what all the fuss was about. Let me begin by saying we were not prepared for what was about to unfold before our eyes. The experience. It's all about the experience.

Deemed one of the worst films ever made, and even described as "The Citizen Kane of bad movies", writer/director/producer/star Tommy Wiseau's The Room will leave you scratching your head repeatedly at the amount of completely random and inexplicable things that happen, don't happen, and well everything in between.

At it's heart, The Room is "supposed" to be a "drama" about a "good man" named Johnny, who is in love with a woman named Lisa, who decides she's bored and starts causing trouble by making shit up about Johnny and cheating on Johnny with his best friend. Yet, you'll barely remember the story, as cliche as it is, because what sets The Room apart from any of the other hundred or so Lifetime movies with the same premise is Tommy Wiseau's complete lack of ability to put a movie together, follow a cohesive storyline, adhere to any sense of logic, or even understand the most basic and fundamental elements of filmmaking.

But it's all those things that make this film such an amazing experience. What can you say about a film that has about 5 sex scenes in the first act of the film? Aaaaand, they just recycle one of them and show it again as another sequence. Hilarious. And why does it look like Wiseau is fucking Lisa's navel? Or why is there a picture of a spoon in a picture frame? Or what's with the constant and odd use of a football at completely random moments. There's a sequence where Johnny (Tommy Wiseau) and gang are all in tuxedo's in an alley waiting for something and for some reason, they decide to toss around a football. The reason for them being in tuxedos and in an alley are never explained, much less the reason for the football tossing. And why does Johnny's best friend Mark sport a beard for half the film, and then inexplicably doesn't for the second half, with no explanation? Why did he choose to shoot the rooftop sequences using a green screen? What's with Johnny's constant laughing? Why did Tommy Wiseau dub his own lines of dialogue with his own voice? I mean, honestly, that's just the tip of the iceberg with all the "WTF?" questions.

I should also mention that you should prepare yourself for the one-liners you'll be spouting off repeatedly. It's been 2 weeks since we've seen this, and we haven't stopped quoting this thing at any available opportunity. It's priceless.

You could rent this thing on Netlfix, but in all honesty, you should just buy it, because it will be a film you will show all of your friends and begs for repeat viewings. What's funny is that there's nothing new to offer in this genre with The Room. The story is as basic and cliche as you could possibly imagine. No, with The Room it's all about the hilarious and confusing lines of dialogue that are spoken so seriously by the cast. Lines that often times make no sense or are so absurd that you just can't help but laugh, made all the more enjoyable by Tommy Wiseau's atrocious acting.

If you feel up to it, I suggest doing some research in the making of this film, which you can find a good chunk of on Wikipedia. It's just as fascinating and hilarious as the film itself. Also, the guy who played Johnny's best friend Mark (Greg Sestero), who is also writer/director Tommy Wiseau's friend in real life, wrote a book about his experience making this certified Cult Classic called The Disaster Artist: My life Inside The Room, the Greatest Bad Movie Ever Made, which you can purchase at Amazon by clicking the link. You can bet your ass I will!

I think I'm just gonna stop right there. I don't want to spoil it too much for you. Rest assured, if you give The Room a try, you will be handsomely rewarded. Gather some friends, invest in some good alcohol and let the magic happen.
Posted by robotGEEK at 10:38 AM