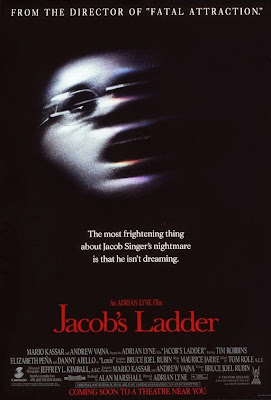 Jacob's Ladder is a film I remember fondly. The surreal aspect of it just always stuck with me. To this day I consider it one of the best examples of this kind of film. But here's the funny thing I learned revisiting this recently after not having seen it for a really, really long time. It's kind of dull.

Most of the time a slow film is not necessarily a bad thing. However, in this case, it really made the film drag for the most part, despite how ultimately fascinating a good chunk of it is with it's inventive story and tripped out sequences. And of course, that is what most people will remember about Jacobs Ladder; the trippy sequences, which are pretty badass. I always felt director Adrian Lyne, who is mostly famous for erotic thrillers like Fatal Attraction and 9 1/2 Weeks should have done more things like this. He's such a natural with this type of material, giving the film such a haunting look not easily matched.

One of the main things Jacobs Ladder has going for it is it's bleak washed out and dingy look. It's quite unsettling and sets the tone for things to come, especially it's early 1980's New York setting. Even when nothing is happening, you feel this eerie sense of dread. And then when Jacob starts noticing and "seeing" things, it's just all creepy as hell. But pretty soon he starts seeing even more fucked up shit on a regular basis, and you wonder if he's just hallucinating, or if there actually are demons and creatures roaming around the city. It's a fascinating concept and it's done so effectively well with Lyne choosing to just tease you with little bits and pieces of this surreal reality rather than to show you everything. Sometimes its a much more effective approach.

As great as these parts of the film are, it's the rest of Jacobs Ladder that seem to hurt it's potential. There's a subplot of Jacob mourning the accidental death of his little boy, which does tie in to some of the events to some extent in the end, but not much else is going on here. I really hate to admit it, but I actually got bored a few times to be honest. But then the film reverts back to "eerie" mode and recovers nicely.

I can't really go on any further without mentioning how great this cast is. Tim Robbins as Jacob is excellent, but the one I really gotta give it to is Danny Aiello. In his extremely limited role, he reminds you why he's so great at what he does. But this film is peppered with a "lot" of notable actors from various television shows, some who went on to great success. Hell, George Costanza eeerrrr, I mean, Jason Alexander is even in this. Is it me, or does playing a douche bag come naturally for him?

I want to just love this film. I thought I did, but after revisiting it again I'm made more aware of it's structural problems. At times it feels like it's missing a beat, and at others, mainly when it's dealing with Jacob's hallucinations/visions/terror, it's a thoroughly provocative and engaging work of art. So much so that you wish more of the film stayed with these elements. Alas, it doesn't, and Jacob's Ladder suffers for it. But it's far from a lost cause; not even close. It's just that the lagging sections make you wish for more of the horror elements, as the trailer promises. But despite it's issues, I have to give mad props to director Adrian Lyne for making something so dark, unique and different. The gore is kept to a bare minimum, but it's the eerie images that leave a lasting impression, and again, so much of that is attributed to Lyne's brilliant take on the material. Shocking the guy hasn't made very many films at all (the guy hasn't made a film since 2002!), and when he does, he takes enormously long pauses between projects, yet none of them match the sheer creativity or flat out darkness of this film. We're talking Kubrick and Malick territory here. Not in terms of quality of course, but in terms of output. But seriously, the guy needs to make dark films like this again. Maybe even some badass detective thriller. Enough with the erotic thrillers.

Overall, I'd give this a solid 8. Were it not for the dull spots scattered throughout, it could easily be a 9 or 10 just for the daring subject matter alone and all the badass elements that make it so memorable even 23 years later. Some might even say it's "Ahead of it's time".
Posted by robotGEEK at 11:23 PM