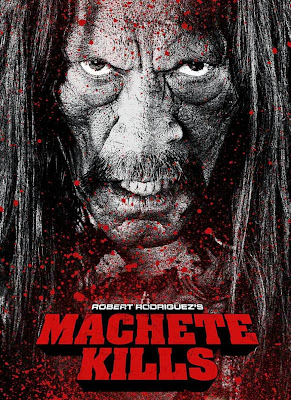 Do you remember the very first time you saw that fake badass trailer for Machete when you first saw Grindhouse? Oh I did. In fact, to most people, those fake trailers by the likes of Eli Roth, Rodriguez and Rob Zombie among others were the definite highlight of the entire Grindhouse experience. But it was really Machete that stood out. Who can forget that shot of Machete flying through the air on a motorcycle with an explosion going off in the background and while a huge cannon is firing off endless rounds mounted on his handlebars. Fuck yea! We hoped and salivated at the thought that Rodriguez may some day actually deliver on the promise of those few seconds of badass. Then came the word that Rodriguez and company were finally going to make that dream a reality and we nearly lost our shit.

Three years after the debut of that fake trailer Machete premiers and while it didn't necessarily deliver 100% on the promise of that sweet trailer, it was a helluva lot of fun. We saw the potential. We saw the dedication and we saw the passion that went into bringing this truly unique character to the big screen. We also saw what we hoped would be the birth of a new franchise starring one of cinema's most underrated and overlooked character actors by the name of Danny Trejo. You might not have known his name, but you've certainly seen him in something. A guy who's certainly paid his dues and deserves his slice of fame. So while Machete was fun and slightly underwhelming, another 3 years later and we now have the much promised sequel Machete Kills. Did Rodriguez learn from mistakes made during the first one? Did he finally decide to embrace the Grindhouse experience 100% and deliver us the film that trailer hinted at 6 years ago?

After leaving the theater and digesting this film for the remainder of the afternoon, my feelings are pretty much what they were when the first film came out. It's ridiculous fun depending on how much you're willing to embrace the "ridiculous" aspect. But there are so many things wrong with how this film is made and with the plot in general that you leave the theater again underwhelmed and surprised that Rodriguez didn't take any of the critiques of the first film to heart in figuring out how he was going to flesh out this second film.

Let's begin with the problems. I'm sure we can all agree that writer/director/editor/producer/composer Robert Rodriguez just needs to lay off filming in digital and go back to shooting his films the old school way, on film. It kills me to admit this, but the last film of his I truly 100% enjoyed was 1996's From Dusk Till Dawn. That right there is a crazy thing to say when you consider it's been almost 20 years since that movie came out, but I'm being brutally honest here. He's made some fun films for sure since then; most notably Sin City and Planet Terror, but have any truly kicked our asses as much as Desperado and From Dusk Till Dawn? For me, the answer would have to be no. By shooting these Grindhouse-style films in digital, he's taking us away from the experience of these films "looking" like actual Grindhouse films. Everything's too clean, too crisp. And his overuse of CGI violence and gore instead of practical effects only adds to the frustration. These Machete films NEED to look and feel old school, that's half of the charm. We need to see that this is actually shot on film. There's just something so special, organic and significant about the quality of film as opposed to digital, and Rodriguez just doesn't seem to get it. And let's say for budget's sake that it was just cheaper to shoot digitally. Was it too difficult to go in and add a grainy and scratchy texture to it? Like they did in the trailer and in the beginning credits? It's almost a sin to be watching these films looking so crisp and clear when we all know they should be dingy and dirty.

Another thing Machete Kills suffers from is that it's just so completely uneven. The second half is definitely stronger than the first, and for me, that's due to how insane and ridiculous it got. But even then, so much of the humor, ultra violence and shit, just most of the action sequences in general all fall flat. I can't be the only one who thinks this, but for me, it feels like Robert Rodriguez has seriously lost his mojo. I can't remember the last time I felt a film felt like a Robert Rodriguez film. Do you remember those days? He had a certain way of shooting and editing; or what I like to call Rodriguez-isms. We don't get any of that here. Instead he shoots pretty straight-forward, almost like he's adopted the Uwe Boll style of filmmaking. Now hold on before you start sending me hate mail. I'm not saying he's anywhere near the shitty style of filmmaking as that guy. I'm referring to the fast and cheap over quality and substance approach. I know what type of film this is supposed to be, but it honestly looks like no thought went into how this thing was going to look. In fact, anybody could have directed this and you'd never know. And even though there was a healthy dose of insane violence and decapitations, I ultimately found myself kind of bored for most of the first two acts because as I stated before, they just fall completely flat and uninspired. And when you can't even get some excitement out of some mindless ultra violence, then something's not right here.

Machete Kills is just too complicated and convoluted for it's own good. Whereas it should be a pretty simple and straight-forward tale of a guy being hired by none other than the coolest president that ever lived to hunt down and destroy a revolutionary and the missile he has set to destroy Washington, it easily becomes so much of a jumbled mess that while it's not necessarily hard to follow, it just seems so incredibly unnecessary. A "lot" of that has to do with the insane cast this thing boasts. By cast I mean reunion for pretty much every actor Rodriguez has previously worked with, and any other actor he hasn't already worked with. So many characters just come and go within the span of just a few minutes that offer absolutely nothing to the story that it's almost overkill in the casting department. What the hell was Lady Gaga doing in here? Why was she even there? And was she supposed to be sexy? 20 minutes could easily have been cut out of this thing and it probably would have made the film flow so much more smoothly.

Machete Kills isn't a total loss though. Danny Trejo, as always, is just one complete badass. Even when the guy isn't uttering a single line, which he rarely ever does, he's exuding tough just with a glare of his eyes or the clenching of his jaw. And holy shit was Mel Gibson just awesome in this. He was just nuts and man he made this so much better. Wait till you see what happens to him at the end. Pure genius and fucking brilliant. All I can say is that I hope that "if" they do make a third film, he reprises his role as Voz. I can't see anybody else playing this madman. Speaking of said third film, before Machete Kills begins we are treated to a trailer for a possible third film Machete film called........well you should just experience that for yourself. It's brilliant, crazy, ridiculous, and plain fucking awesome. Actually, it's probably one of the best things about the Machete Kills overall experience. If it ever gets made, you can guarantee I'll be first in line for that one.

Ultimately not the Machete film I was hoping for. Again, you see the possibilities, but Rodriguez, for whatever reason, is unable to fully deliver. You just can't help but feel that this could and should have been so much better. Luckily that badass last act really turns things around and reminds you why you came to see a film called Machete starring Danny Trejo. It's just all kinds of nuts and ridiculous and I loved the hell out of it. Now with how this one ends, it leads off into the third film, and if that third film ever gets made and can deliver on what the end of this film and it's trailers promise, I think we might get the most far-out there Machete film to date.
Posted by robotGEEK at 9:33 AM