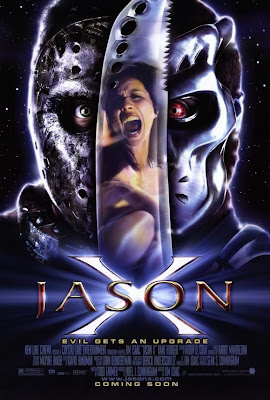 Well here we are. It took me long enough, but I've finally gotten around to watching the infamous Jason X. After my "Best to Worst List" of the Friday the 13th films this past Friday the 13th - which didn't necessarily include all of the Friday films - I was asked why Jason X wasn't included in the list, both here and on my Facebook page when I listed it. So I figured what better excuse to finally sit down and check this sucker out.

I think I never "wanted" to see Jason X because quite frankly, it looked stupid. That was my thinking when it first came out and that's my thinking right up to the minute before I sat down to see this. "Jason Vorhees in space? They've surely run out of ideas and it couldn't possibly be good, let alone decent." (That's me talking to myself by the way). But honestly, all you need to do is prod me about it a little and I'm in. Maybe that's what I needed all along, because while I love a good solid horror film, I also love me some "So Bad It's Good" horror, which is the category Jason X certainly seems to fit into. Plus, I figured, It couldn't possibly be any worse that Part 5 or Jason Takes Manhattan..........right? Boy was I wrong. Dead wrong. *Pun intended. Get it?

I really hate to admit it, but Jason X was probably one of the worst films I've seen in a very long time, and not anywhere near in a good way. I can go on and on and on about all the things that make this film suck balls, but the one thing that keeps popping into my head more than anything is that above everything else, it's just inept. Every single facet of the production was just incapable of delivering on the premise of a badass horror film in space that it manages to epicly screw up the concept. And that's where all the problems lye. How in the hell can you screw up a movie about Jason killing a bunch of people on a spaceship? Well they figured out a way here.

Here's the first thing I noticed immediately. The quality and look of this thing makes you feel like you're watching an episode of a bad science fiction show on the Syfy Channel. I'm not exaggerating one bit. It's so poor and it looks like they used television camera's rather than professional grade camera's that........aw who gives a shit. It looked like crap. But that's just for starters, we've also got some rather amusing set design. Amusing in the sense that it looks like they were on a theater stage. And the costume/wardrobe. Oh man, where do I begin. This was actually quite funny and I did laugh about this, quite a bit. They're in space. It's hundreds of years into the future, they're all scientists, yet every female character is dressed like they're ready to hit a club, or like a hooker. The guys are dressed fine, admittedly a little awkward, but they're dressed. The women, not so much. And I know, I know. The Friday the 13th series has built a reputation on scantily clad women having sex whenever and wherever, but even I found this whole "scientists in space in the future dressed as hookers" bit to be a bit too ridiculous. And that's the kicker here. I've heard and read that maybe the filmmakers were in on the joke. That they "had" to have known how awful this was and played it up. After seeing the "special features" on the DVD release, I'm not so sure. If anything, they were proud of this film, repeatedly boasting about the amount of digital effects in it. Digital effects I might add, that even by 2001 standards, are just terrible.

I've stated this repeatedly and I'll say it again; I love bad movies. I really do. But this bad movie has no redeeming quality for me, it's just bad. Not bad in a fun way, just bad from every angle. Even the kills did nothing for me, a usual high point . And honestly, as I hate to lay the blame on any one single person, in this instance I feel the majority of the blame has to go with director James Isaac. I think had this been in someone else's hand, someone capable of taking this ridiculous concept and spinning it on it's head, it could have really been something. But that's not what we get here. Instead we get a film that looks like it was made for television with everything that we don't like about sci-fi and horror films made for television. I'm honestly not surprised though, Isaac doesn't have an impressive filmography. I think his most notable film is The Horror Show, with the late great Brion James and the always awesome Lance Henrikson. That film  wasn't half bad, and a vast improvement in quality over this film, which is surprising since the budget of The Horror Show was minuscule compared to this.

When the hell did Jason grow hair? For real. He's a zombie, yet he's able to have hair? How is that possible? And what's with all the eye action going on here. It seems they did everything possible to have the one and only Kane Hodder "act" as much as possible through the use of his eyes, which is a huge significant change from any other Friday film. Like they're trying to give the guy some personality. While usually not a bad thing, it just seemed out of place in this film.

I do know a few that actually really like this one. And who knows, maybe a few years down the line I'll appreciate it differently. Right from the beginning I knew it was such a ridiculous concept, but held out hope that it would be so over the top or so bad that you can't help but appreciate the balls or ingenuity to go in this direction, but all it does is lack any talent or originality from every angle, leaving it a shallow extremely low grade and uninteresting bore. It seems in this case, my instincts to stay away from this for 12 years were spot on.
Posted by robotGEEK at 2:34 PM