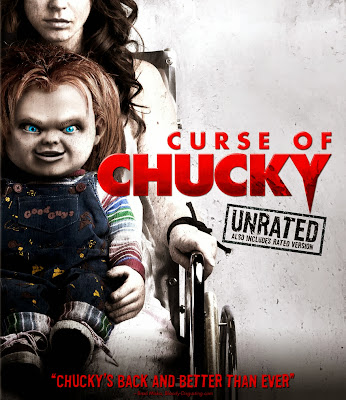 I think we can all agree that after Part 3, the series got incredibly ridiculous; almost like a caricature of itself. But at the same time I think it shows a lot of balls on Mancini's part to embrace that ridiculous vibe and just go with it. I'll admit though, for all it's lunacy and comedy, a far cry from the first Child's Play, Bride of Chucky was pretty fun. But then after that it just got more and more silly and they lost me.

Well it seems Child's Play creator Don Mancini, who's written every Child's Play film to date, decided to get back to basics with the franchise and really go back to full on horror, because let's face it, the last few just weren't scary anymore.

Curse of Chucky was a nice return to form for the Child's Play franchise for me. It was slow, dark and most importantly, they got rid of all the "silly". CoC also boasts an impressive number of things that actually make it good. Immediately, one of the first things I noticed was it's impressive and dark score. Hey, when a score can stand out these days, much less a DTV flick, they're obviously doing something right. And it also looks like Mancini did his homework on this one, where he returns to the director's chair after having only ever directed Seed of Chucky. He's made a small scale yet stylish little horror film, and the thing looks good. You'd never know he's only ever directed one other film, especially when you consider 95% of the film takes place in one house. I'm sure you can imagine how difficult it is to try and make one house look interesting for an hour and a half, but he manages to do just that.

But CoC is not without it's problems. While I dug the whole moody and slow buildup vibe, for the first hour, it was almost too slow. I'm all for a slow intense buildup, but once I passed the halfway mark I was wondering when the heck things were going to finally start happening. By my estimation, that was at 1 hour. But it's not really all that bad. The performances, style, score, and just the overall vibe of this new installment all just gels so well together that it's surely enjoyable.

Another thing I had an issue with was the use of CGI. From what I understand, this is the first time using CGI for Chucky in any of these films. Granted, it's not for every scene, mainly for the closeups, but it just didn't look very good. Actually, from one scene to the next, it looked like a completely different doll. In fact, whenever they implored the CGI for the closeups, Chucky looked like a girl. But thankfully, it was mainly used for closeup shots. I just wish they hadn't have used them period. It's so noticeable and when they try to get Chucky to make an evil face, he comes off looking goofy and silly, not the least bit scary. You have to remember, this is also on top of the already redesigned Chucky doll. Even in practical form, he looks noticeably different. And I'm not sure how or why, but in the last 30 minutes of the film it looks like a completely different version of the doll. Different hair, different face, everything. But hey, it's Chucky. "You" know it's fucking Chucky and that's all that matters right? Maybe I'm just nitpicking? Does it take away from the experience? Not at all. It's just unnecessary, so Fugedaboudit!

The events of this film make no mention of the events of the last few films, instead being more of a direct sequel to Child's Play 3. So I'm a little stumped at why writer/director/creator Don Mancini decided to call this one Curse of Chucky instead of Child's Play 4 or something, because right off the bat, you're expecting something along the lines of Seed or Bride of Chucky with a title like that.

Alright, alright, enough of the nitpicking. I have to give credit to the pretty outstanding casting here. Not only does the one and only Brad Dourif return to voice the little guy, but his daughter actually stars in this thing as a wheelchair bound shut-in who's pretty much shut herself off from society and holed herself up in this big house with her overbearing alcoholic mother until they receive a mysterious package containing DUN..DUN...DUN....a Chucky doll. Naturally, this is where the shit hits the fan and events are set into motion. And was it just me, or was the one male lead a dead ringer for Mark Ruffalo?

What surprised me a little was the very sparse use of gore. Sure there are some pretty cool and inventive kills, as with any Child's Play film, but it wasn't nearly as gory as I was expecting it to be. However, there are a few sequences of gory bloody delight and man are they pretty brutal. So when the scene calls for it, the effects work is pretty damn awesome.

Overall a solid film and a nice detour from the things we've come to expect from a Child's Play film for a little over a decade now. It's surprisingly slow first half might throw some people off, but stick with it because the second half delivers the goods. I for one am happy to see the franchise embrace it's roots again.
Posted by robotGEEK at 7:19 AM