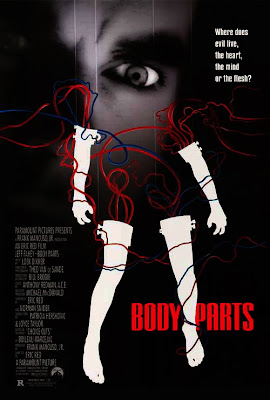 By now, you surely have heard of Eric Red. If you haven't, then that's something that needs to be rectified immediately. For starters, he's the guy who wrote the original The Hitcher, an all-time favorite of mine. He's carved out a distinctive career mainly as a screenwriter with some pretty great genre films like Near Dark, Blue Steel, Bad Moon and The Hitcher under his belt. He's also responsible for the Cult Classic Cohen & Tate, which I have yet to see. Hard to believe it's taken me this long to finally sit down to watch this one though.

Body Parts has an interesting premise. Jeff Fahey plays a criminal psychologist who loses an arm in an automobile accident. A doctor has come up with a new revolutionary procedure where she transplants body parts, in this case an arm, from a donor. After a series of freaky events Bill (Jeff Fahey), begins to wonder if it has anything to do with the arm he's just received. After some digging he discovers that it belonged to a serial killer and he begins to wonder if the soul of someone is also transplanted with these operations as he seems to be experiencing the thoughts and emotions of this former killer. Meanwhile patients of this radical new procedure start turning up dead with their newly implanted body parts missing. Is this somehow connected?

So we've basically got a sort of Frankenstein premise going on here, but more in line with a psychological thriller/horror film. An interesting concept and a very unique one, one that I found fascinating, made all the better having been made in the early 90's, giving it that specific look and feel. But at the same time it can also be a difficult idea to tackle. You can certainly go in different directions and different genre's with this premise. So how does Body Parts fare?

Body Parts mostly works. Overall, I really enjoyed it. Eric Red again delivers a genre film that entertains from beginning to end, relying mostly on it's constant sense of dread. Much like in all his films, there's always a feeling like something bad is about to happen at any given moment. The Hitcher is a prime example of this. Yet, as much as I enjoyed this film, it felt like it could have been better somehow. For a film of this type, it feels surprisingly small scale. However, Red is able to make a film look good and for these types of films, that can go a long way. But it's also Fahey's standout performance that draws you in and keeps you hooked. The guy delivers the goods here as a man who starts off as your typical family man and then suddenly begins to slowly morph into something else mentally. I'm always surprised when I see films like this and wonder why his career never got any bigger than it did. For a lot of scenes in the second half of this film, he more than proves he's got the intensity.

I think a lot of people didn't really take to this film or it's concept, which shows in it's poor box office results. I'll be honest, I didn't really take any interest in seeing this one myself back then. I think the 90's turned a lot of people off to horror. The 80's were where it was at. The 90's just seemed to be a letdown in terms of original output, but that's not to say some certainly tried. Though not a hit when it was originally released, time has certainly been kind to this film in general. And why not? It's got a lot of things going for it. First of all, the film looks slick. Not sure why Eric Red didn't take the directors chair more often, but the guy's got a natural talent behind the camera. Not being overly stylized, yet maintaining a constant slick 90's look to it, Red infuses the film with some really top notch standout sequences. For one, the car accident in which Fahey's character is involved in is just plain brutal and amazingly shot. There's also a kick ass car chase midway through the film that was just about as expertly choreographed and executed as could possibly be. But it's a scene at the very end of that sequence that just kind of made the film for me. You'll know which one I'm talking about when you see it. It's literally the highlight of the film for me. If the whole film had sucked, yet still had that one badass scene, I think I would gave still liked it. That's what 90's Cinema was all about.

Warning: Minor Spoilers!
So Body Parts has some other killer scenes and sequences, as well as a pretty eclectic supporting cast with faces and names you'll most certainly recognize from other films and television shows, most notably Brad Dourif (This guy's in everything!). It's got a unique and semi-surreal score, which I liked quite a bit, a constant eerie sense of dread and something else I forgot to mention, some badass practical effects and makeup work. Yet somehow it feels slightly off. I think some of the promotion of the film led you to believe that Bill is having trouble becoming accustomed to both his new body part and the thoughts, delusions and feeling that came with it, causing him to act out and becoming almost uncontrollable. Yes, that's part of the story, but it's only a very little part of it. Most of it deals with Bill's becoming acclimated to this new foreign body part and the things that start happening seemingly because of it, but the entire second half of the film takes on a different storyline and it's with this one where Body Parts really shines. You see, someone is out killing all the transplant recipients and stealing back the body parts. Very cool idea indeed and effects-wise, pretty gory and fun. So I feel the marketing was a bit off. I mean, it didn't ruin the overall experience, but I can see how some might have gotten the wrong idea going in thinking it was going to be about some guy who starts going crazy after receiving this new limb. For sure, that would be a badass film in it's own right, but at it's heart, that's not what Body Parts is about. It's almost like two stories that shift at the halfway mark. But oddly enough, it's the slightly different first half that sort of warms you up for the killer second. It's slower, yes, but it doesn't mean it's any less entertaining. It's a slower buildup than what I was expecting, but it's only to knock your socks off with the second half, which it does, gleefully. And at running only 1 hour and 20 minutes, it's a shorter film than I'm used to, but it's as short and as long as it needs to be.

Great look, great effects, great performance from Jeff Fahey, along with some really standout sequences make this one you should definitely seek out.
Posted by robotGEEK at 7:44 AM