robotGEEK'S Review: The Serpent and the Rainbow 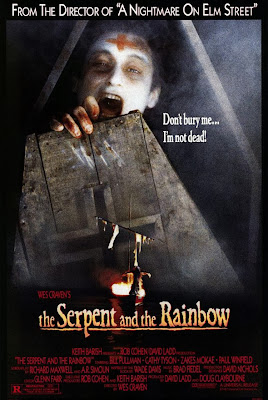 The Serpent and the Rainbow may very well be director Wes Craven's most mature and visually arresting film to date. Though he'll always be known for having created Freddy Krueger and the Nightmare on Elm Street franchise more than anything, when you look at his filmography as a whole, the guy is about as hit or miss as you can get. And let's be honest here, the misses far outweigh the hits. What's even more startling is that he made this damn fine film in '88, then makes the crapfest that is Shocker the very next year. So that right there is the perfect example of his hit/miss and completely random in quality output.

I had seen this when first released, but remember nothing about it other than it was about voodoo and it starred Lone Star eeerrrrr....I mean Bill Pullman. And I remember it not really having much of a reputation or a following, like some of his other films. It seems to be sandwhiched between the successes of his Nightmare and the Scream films (yes, unfortunately he will always be the Nightmare on Elm Street and Scream guy, despite everything else he's ever done). But as with most films from around this period, I was too young to really appreciate a film like this. I mean, I'm pretty sure my fool head probably dismissed it after seeing his name attached, and it ended up not being a film about a killer, thus disappointing me in my juvenile immaturity. But alas! I've seen it again and I'm here to impart some words that will hopefully get you to check this one out again.

The Serpent and the Rainbow is good. In fact, it's one of Craven's best films. Strange that it doesn't have more of a reputation though. Maybe it's due to the fact that it's not really a straight-up horror film, as we are used to having from him, and more of a mystery/thriller, with a lot of supernatural overtones. Let's face it, Craven hasn't outdone himself since the first Elm Street film. And between that first Elm Street and the first Scream film, his filmography is peppered with a lot of duds, so it was quite refreshing to sit down and experience The Serpent and the Rainbow, and actually enjoy it. And I did, immensely. This film has such a different visual style and tone compared to anything he's ever done, which is almost shocking to learn that right after this he made Shocker; a film I wanted to like so much, but was just not very good overall, for a lot of reasons. Let's be honest, Shocker truly had the potential to be a great 80's iconic horror film, and even if you overlook the horrible effects work, it's just not a very well made film. But I digress.

What I loved about The Serpent and the Rainbow was that it played it straight, and didn't try to come off as a horror film, which makes it much more effective. Sure, there are some truly horrible things that happen in here, and some of the characters are just pure evil, but you don't get the sense that this was intended to be anything but a dark thriller about voodoo, which it is. It does go a little "out there" in the end, but it's never really done in a cheesy way that takes you out of the experience.

Overall, a solid dark film with some truly iconic imagery and a standout in Wes Craven's career.
Posted by robotGEEK at 10:59 AM