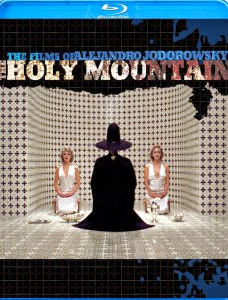 It's safe to say I have never seen anything like Alejandro Jodorowsky's The Holy Mountain. Only being vaguely familiar with his brand of films, and only having ever seen El Topo many years ago, The Holy Mountain is a tour de force of images and sequences that will leave you in awe of his masterful ability to conjure images that can both shock you, disturb you, and leave you breathless.

I knew I was in for a surreal vision from someone who has been deemed the David Lynch of his era, but I was not prepared for the onslaught of artistic brilliance thrown at the screen from all directions in this sometimes overbearing 1973 visionary experience. As I watched this, I could not imagine the amount of time it took to construct these massive sets, to set up some of these ingenious shots, and to come up with the plethora of surreal images the leave you stunned, impressed and confused all at the same time. With El Topo being my only other Jodorowsky experience, that film is much smaller in scale compared to this sprawling epic.

Via Amazon:
The scandal of the 1973 Cannes Film Festival, writer/director Alejandro Jodorowsky's flood of sacrilegious imagery and existential symbolism is a spiritual quest for enlightenment pitting illusion against truth. The Alchemist (Jodorowsky) assembles together a group of people from all walks of life to represent the planets in the solar system. The occult adept's intention is to put his recruits through strange mystical rites and divest them of their wordly baggage before embarking on a trip to Lotus Island. There they ascend the Holy Mountain to displace the immortal gods who secretly rule the universe.

I'm not a religious person, but it helps if you are to understand what's going on here. I myself was lost for most of it, with my movie partner having to fill me in on all the religious and sacrilegious imagery and the meaning behind them (she's a nut for this kind of stuff). Personally, being as I didn't understand a lot of it, I couldn't really be offended. Yet I can see how it can and did do just that upon it's original release, resulting in it being banned for so long. But for me, it was the visual artistry that had me hooked immediately beginning with it's opening shot. Each shot and each sequence is so meticulously put together and planned out and flawlessly executed that it's quite frankly hard not to be impressed.

Not told in any normal type of narrative, you have to really be submerged in this type of film to be able to sit through it, and I'll admit, if you don't have an open mind, it will be a tough sit for some with it's crude depiction of sex and violence interwoven with surreal religious imagery, along with the occasional depiction of animal violence. The animal violence was really the only issue for me. I can't stomach that stuff.

This film has an equally fascinating history from concept to production. I won't bore you with all that backstory though. As much as I find that stuff fascinating, I know a lot of others don't. If you are interested in reading up more on the making of this film, and some insight into how it was ultimately made, released and the reason why it wasn't available for 30 years, definitely check out Alejandro Jodorowsky's Wikipedia page, which you can find HERE. If you're into this kind of stuff, it's a fun and insightful read.

After making this film, Jodorwosky was in talks and preparing to make Dune, with Pink Floyd supplying the score, H.R. Giger on character design and Salvador Dali and Orson Welles for the cast. My feeble little mind just can't comprehend how badass this film could have been with Jodoowsky's unique vision behind it. EPIC is the only word that comes to mind. There is documentary by director Frank Pavich titled Jodorowsky's Dune that's been hitting the festival circuits and should be making it's way to the home video market soon. I've heard good things and I personally can't wait to check that out.

Not for the faint of heart, but a fascinating journey if you're willing to take it. At times disturbing, weird, surreal and beautiful, Alejandro Jodorowsky's The Holy Mountain will leave an impression you won't soon forget. Not so much a film, but an experience.