Quick Shot: The Brotherhood of the Wolf 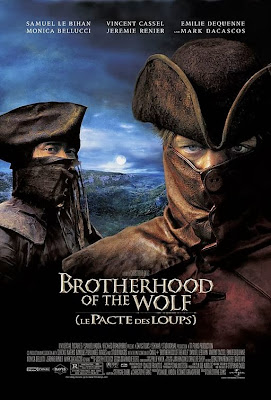 This was a film that blew me away the first time I saw it. So much so that as soon as I did, I went out and bought myself a copy. At the time, I remember it being one of the best films I'd seen in a long while and such a breath of fresh air. A unique story blending history, action, horror, martial arts and mysticism all set to an 18th Century French setting.

It had been a while since I'd seen this, so I decided to throw it on again and wow, what a difference a second viewing made for me. While I still think it's a great film, I found myself utterly bored for long stretches of time and wondering why the filmmakers felt the need to make this as long as it was. 30 minutes could easily have been cut from this without affecting anything important and it would have flowed so much better and faster. Instead of focusing primarily on the hunt for the strange beast that has been killing hundreds of people in a small town in France......and the reason why these two main characters are even there to begin with, the story goes into so many other subplots that half the time you forget what the movie is supposed to be about. Subplots, I might add, that are just insanely dull. It's not until the last act that things finally get back on track and you're finally treated to the film that you had initially thought you were going to see. But by this time, it's already too late for some people.

Don't get me wrong, overall it's a great film that has incredible production value and the mish mash of genre's works effectively well. Director Christophe Gans can shoot the hell out of anything, which surprises me that he hasn't made more films. In fact, he hasn't directed a film since 2006's Silent Hill. I still haven't seen Crying Freeman though, but I'm dying to. I've heard good things. But the work he does here is utterly impressive. A lot of times these types of period films can look dull, but Gans gives it a gothic flavor, almost delving into del Toro territory. Sleek and stylish, with a gothic/horror sensibility.

I'm always surprised when someone tells me they haven't seen this yet. It's such a unique take on the period film and I would have thought it would or "should" have a bigger audience. Despite my gripe about the subplots, a lot of this film works exceedingly well. It's got a great international cast with some notable names like Vincent Cassel and Monica Bellucci. But the real surprise is of course Mark Dacascos as the Native American companion Mani. Hey, he's Mark Dacascos, so even though it's a period piece set in France and he's a Native American Indian, you know he's gonna throw down some martial arts skills, which he does.......and it's awesome.

The effects work as well as Gans impressive and often times stunning visuals make this a pretty badass film in it's own right. They just should have cut a good half hour out of this thing, it would have made it flow so much better and you wouldn't have forgotten that you're supposed to be watching a movie about 2 hunters who are after a mysterious beast roaming the country side killing hundreds of people. That's what we want to see, not the various subplots on political jargon, romantic escapades and witchery. Yet, minor diversions aside, it's a quality film with a lot to offer.
Posted by robotGEEK at 12:06 PM