While I went through a pretty heavy Ninja Phase back in the 80's when I was a kid, my only real memory of this particular film is of it's crazy cool VHS Big Box cover. That's it. Which is surprising because I was just all about Ninja's and Martial Arts flicks back then. I even wore Ninja shoes that I would get from a small local Asian shop, and my very sweet Asian neighbor would often bring us plastic Ninja swords and whatnot as random gifts. I'm telling you, I was so far into these films and this genre as a 10 year old, yet for some reason I have zero memory of this one. Other than of it's existence.

Flash forward 3 decades and despite some forgettable no-frills DVD releases, these Ninja classics are finally getting some love and true respect with some killer Blu-Ray releases packed full of extra content, on top of their impressive new transfers. Recently a fellow friend, action lover and film reviewer, The Cinema Drunkie, wrote a piece on this long-forgotten classic, which fueled my instant desire to revisit this. Lucky for me, there was a fairly recent Arrow Films release of this on Blu, which I was completely unaware of. For a great price no less! Let's dig in.

Going in with absolutely zero knowledge of what to expect, I can honestly say I was as giddy as a little kid watching this. I had a grin a mile long, and truth be told, I really felt like a 10 year old kid watching a Ninja movie for the very first time. It's experiences like these that I crave, that give me the drive to keep doing what I do, and it's the kind of feeling I'm always hoping to get when I pop in a new flick, yet seldom ever do. Why is that you may ask? Well, it's not entirely because of it's production value or high-end quality, but more on that later. No sir. This one is special for a number of reasons, not the least bit being it's just a grande ol' time.

You see, Pray for Death would never qualify as a great film in terms of craftsmanship. To be blunt, it's a cheesy mess and oftentimes feels like it was written by a 15 year old. But that's not a complaint! Quite the contrary. It's actually some of it's greatest assets! It looks and feels like the type of film we all wanted to make with our friends as teenagers after having seen a really badass Ninja flick on VHS or BETA. That's exactly what Pray for Death feels like, and it's glorious.

There are moments that standout for sure, where director Gordon Hessler actually does a fine job (albeit brief) behind the camera, giving the film a slick few moments of true cinematic badassery. But the best moments are when you realize that he probably wasn't the best choice as director for a film of this type, because his inability to shoot a decent fight sequence (sometimes it's laughable), combined with the sloppy editing and sometimes awful acting, Pray for Death succeeds despite all of these issues because while they might not be bringing their A-Game, it's done in such an endearing and purely dedicated manner that you just can't help but fall in love with it.

Speaking of which, let's talk about who actually made this. For starters, James Booth is credited as the screenwriter. He also happens to play the bag guy in this, and if you need further proof of his very specific flavor of ninja film, you should know that he also wrote American Ninja 2: The Confrontation (easily the best in the series because of how bonkers it is). You see, I don't think Booth actually did any research on ninjas (that's my feeling anyway) or their lifestyle. Instead, it comes across as more of the type of film he "thinks" ninja films should be like, and that's quite okay with me because, let's be honest, American Ninja II and now Pray for Death fucking rule. James Booth is no master of the screenwriting artform, nor does he shy away from racist stereotypes and insulting slang, but we can kind of forgive him for that because the mid-80's was a very different time. But he is a decent actor, so I will give him that. Does he come off as the brutal badass he writes the character as? Absolutely not. But he certainly does try. But all I can say is that I'm quite happy that he's as delusional about the ninja mythology as he is, because it's fucking fantastic and makes the film a thousand times better and far more entertaining.

German director Gordon Hessler, who cut his teeth directing episodes of classic shows like Wonder Woman, Hawaii Five-O, Kung Fu, ChiPs and The Master does about an equal job in his efficiency. Not that I'm complaining, because I'm not. He shoots the film in such an uneven amateurish way, full of terrible camera setups, and fight sequences that clearly show that the punches and kicks never land, but that's okay! Because that's part of what makes this so great! It's unintentionally cheesy and unintentional silliness that makes it so much fun. Like I mentioned before, it feels like the ultimate ninja movie made by a bunch of teenagers, or grown men who made it all up on the spot and it's fabulous. There are fantastic moments to be had for sure in the middle of all the amateurishness, like when Akira (Sho Kosugi), in full ninja gear in broad daylight, is running down a street towards a red truck driven by the main bad guy (James Booth), who's barreling towards this mysterious ninja at full speed. Akira jumps over the truck seconds before it nearly strikes him, doing a flip through the air and landing perfectly. It's one of many highlights of the film that leaves a foolish grin across your face and you keep begging for more. And boy does it deliver, and keeps delivering the badass goods on a consistent basis. Gordon Hessler and Sho Kosugi would go on to work together again the following year with Rage of Honor, which if this film is any indication, looks to be just as crazy good and entertaining.

Sho Kosugi, arguably the reining champ of ninja films, made a total of 6 ninja films during his reign in the 80's, and only appeared in a total of 19 productions in his entire career, which is shocking to say the least. You would think having that kind of killer track record would have led to a long and lasting career, but it did not. If you were wondering whatever happened to the guy, be sure to check out the Special Features located on this Blu-Ray release. 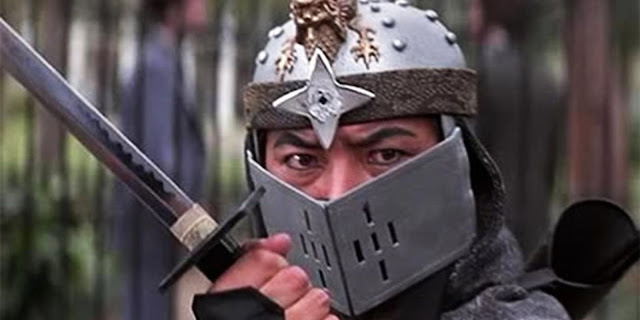 Plausibility is completely thrown out the window in favor of kickass action under the most ridiculous circumstances and I loved every fucking second of it. Pray for Death, for now, might very well be the best damn ninja film ever made.

I had no idea that Arrow released this, along with the followup Rage of Honor, on Blu-Ray back in 2016, which is a damn shame that it didn't get more fanfare. But I guess being late to the party is better than never showing up right? And it's surprisingly affordable too, which automatically makes it a must-buy. I have to be honest though and admit I'm not much of a fan of the new cover art. I feel that original closeup of his face is so iconic and says so much, while also looking and feeling so retro cool all at once. But that's just me. 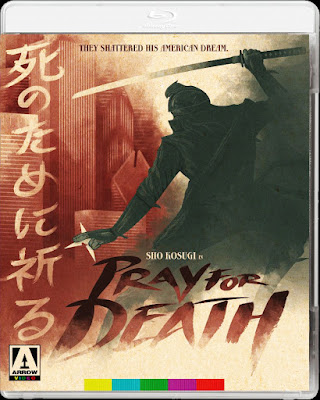 The new HD remaster is incredible. The film looks great and the best part is that it's in widescreen and Uncut for the first time. These "Uncut" scenes are clearly noticeable because their quality is so different from the rest of the film, so they'll be easy to spot. Ironically, you have to wonder why they were even cut to begin with because the violence isn't anywhere near as graphic as you'd expect. In fact, these new scenes added to the action and fight sequences, while bloody, are rather tame compared to violence found in movies and tv shows today.

The Special Features include a vintage TV Spot/Interview when Pray for Death was premiering in New York, and you see Sho Kosugi talk about the film in depth and also about the appeal of ninja films, and his involvement in trying to make the best film they can. He also does a killer routine for a live audience ahead of it's premiere. Fun stuff!

The best bonus to dig into is the brand new interview with Sho Kosugi. Honestly, this Blu-Ray release is worth the price alone just for this interview. Sho, while looking good for his age, is damn near unrecognizable. I never would have assumed it was him. Here he discusses his entire career, what led to his transition to the U.S., his start in the film industry as an extra before being noticed by Menahem Golan from Cannon Films, to his reign as "the" baddest ninja on the planet in the 80's, to what he's been up to since then. This interview is a Must-Watch.

This release also comes with a booklet that includes an excerpt from Sho Kosugi's upcoming Biography.

You can order Pray for Death directly from any number of online retailers typically for under $20.
Buy it. Just buy it. You'll thank me.