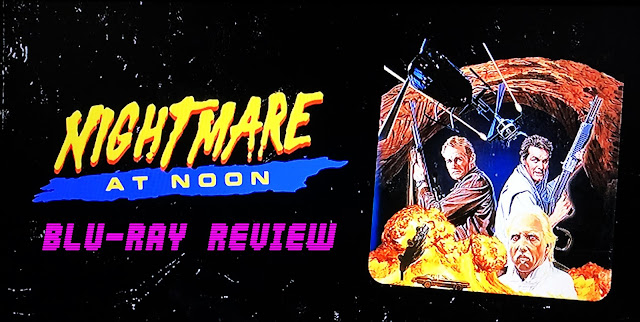 Unlike a lot of other fans of this particular genre, I had actually never heard of this, which is strange since it's generally my favorite genre and I just adore low-budget 80's action films. In short, I live for this shit. And despite it's killer cast led by Wings Hauser and Brion James, it was the fact that it was written and directed by Nico Mastorakis that sold me. If you don't already know who he is, he's the genius behind cult classics such as Hired to Kill and The Zero Boys. While I haven't yet gotten to Zero Boys, Hired to Kill is hands-down one of the best, most entertaining (oftentimes unintentionally hilarious) low-budget action gems ever made. If you haven't seen it, I urge you to please rectify that this very minute. But back to Nightmare at Noon.

Doing some research on Nico Mastorakis (such a rad name!) a few months ago, after falling head over heels in love with Hired to Kill, led me to this title, and I quickly learned it's a favorite among the low-budget action community. So why hadn't I heard of this yet? I really have no clue. I intended to grab the VHS at some point, until I learned Shout! Factory would be releasing this in March, so I figured I'd wait and watch it in it's best presentation possible. Well that day finally came and I got my hands on it, so let's dig in. 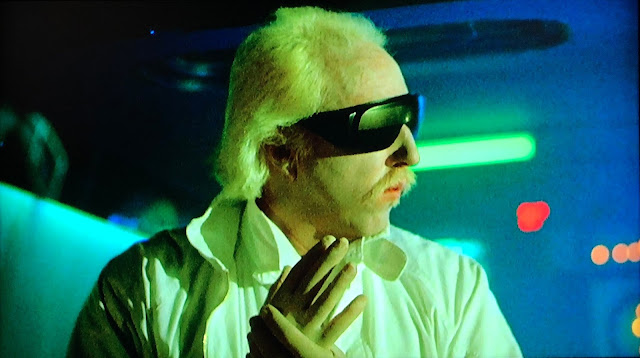 When an evil scientist poisons a small town's water supply, effectively turning them into raging zombies, a drifter ( Bo Hopkins) and a lawyer on vacation (Wings Hauser) band together with the local sheriff (George Kennedy) to try and stop this epidemic right at the source.

Originally released in 1988, I can honestly say that Nightmare at Noon aka Dead Street USA deserves all of it's praise and was every bit as fun as I was hoping for. While not quite nearly as great as the excellent Hired to Kill, it's just about as absurd and all done with a straight face, which makes it all the more entertaining. The cast is impressive, and writer/director Nico Mastorakis never fails to impress me with his visuals. I can't really put my finger on it, but there's just something very special about the way he shoots. Slick, but never overly stylish. He keeps the visual tone and aesthetic grounded, rather than trying to make it too flashy. Yet there are still some standout moments that will stay with you, as they should because they're awesome. Visually, I would say it's one of the more impressive efforts in this genre. Mastorakis' no-fuss approach works really well with the material, letting the film play out effectively in other ways, and the result is another winner in his filmography, full of great stunts, action, violence, unintentional absurdity and a fantastic B-Movie cast. 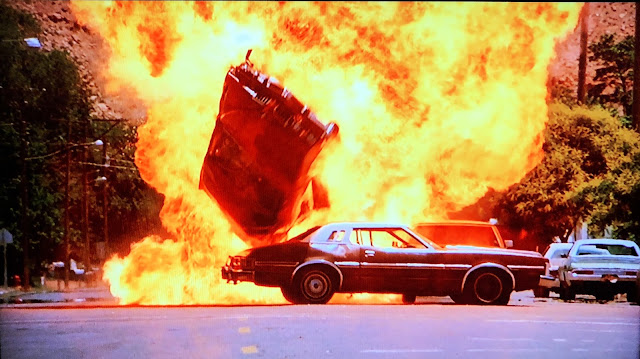 Shout! Factory recently released this long-forgotten gem on Blu-Ray for the very first time this past March, which was just the push I needed to finally check this one out. I loved it, and it was every bit as fun and ridiculous as I was hoping for. Absurdity galore, mixed with some killer stunts, action sequences, an impressive roster of B-Movie actors, and a slick production and presentation that makes it a true standout among the crowd. While they never really explain why the albino villain (Brion James) is doing what he's doing since he never speaks in the entire film, it doesn't really matter. It's still a really fun ride.

Nightmare at Noon boasts a brand new and impressive HD Master from the film's Interpositive, and the result is a beautiful print with bright neon and bold sun-drenched colors. It might also be the first time seeing this film in widescreen, but I'm not 100% positive on that. Regardless, this under-the-radar gem never looked so good. 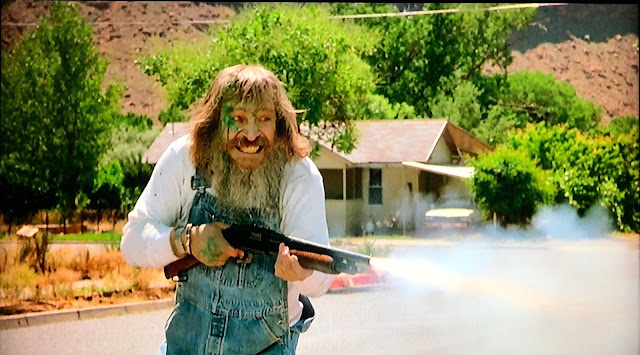 There's a vintage "Making Of" that looks to be homemade more than anything, but does offer some great insight into the production and most amusingly, Mastorakis' displeasure with working with Wings Hauser, who was a real nightmare to deal with. It also touches on all different facets of the production, including a bad stunt accident that sends a stuntman to the hospital. A trailer and still gallery round out the Special Features.

So not a lot in terms of extra content, but what you do get is a fun film in a great presentation, an old behind-the-scenes look that appears to be shot on home video, that, while informative, is a bit dull and too long for it's own good.

You can order this single-disc release directly from the Shout! Factory website for $23.99, and any number of online retailers. 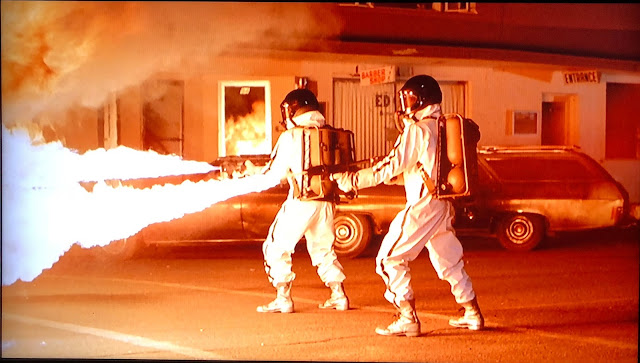