This is one of those covers I remember seeing often on the video store shelf, but never really gave it a second thought. I mean, just based on that cover it comes across as another mismatched duo comedy that I really don't care for. And to a certain extent, that's exactly what it is, a mismatched buddy action/comedy. But it's also so much more than that and quite the pleasant surprise once you get past the first half. Let's dig in.

Two mismatched mercenaries are hired by the CIA to overthrow a South East Asian dictator by helping the local band of rebels train in combat. At first just another job, they soon learn that it's become more of a purpose. 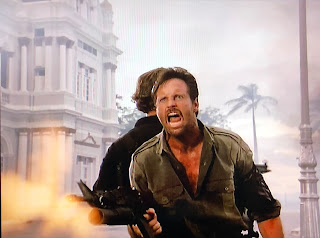 Fifty/Fifty was marketed (obviously) as an action/comedy and it technically is, but the comedy only hangs around for roughly the first half before it's nixed completely and Fifty/Fifty becomes a full-throttle action-in-the-jungle film, and boy does it deliver. Though the comedy is present for the first half, it's never overdone and pretty tame compared to other films, like say Stakeout for example, another 80's action/comedy that's similar in that it begins as an action/comedy, painfully so, before turning into an action/thriller in the second half. I'm happy to report that the little comedy this film has is far and away better than the painfully forced and terribly unfunny comedy of Stakeout.

Directed with gusto by Charles Martin Smith, yes that Charles Martin Smith, the actor in such classics such as Starman and The Untouchables who's also a fine director who started off his directing career with the cult horror classic Trick or Treat, Fifty/Fifty is probably one of the most underrated and easily forgotten/dismissed action films to come out of the early 90's. What's more, this is a Cannon production, something I wasn't even aware of until I popped this in. But it's not a lazy Cannon production either, unlike a lot of their films at the tail end of their reign. Because of Smith's slick direction, this film looks bigger than it has any right to, and boasts some impressive camerawork, visuals and action set pieces. Honestly, if there's anything I took away from this, it was how great the film looked overall, and I kept thinking how Charles Martin Smith is so undervalued as a director. I can't say that I've seen all of his films, because after his one-two punch of Trick or Treat and Fifty/Fifty, he went straight into family films and television work, but I can only imagine what solid films he could have delivered had he been given the opportunity to direct more action and horror films because as it stands, his work on Trick or Treat and Fifty/Fifty is quite excellent. 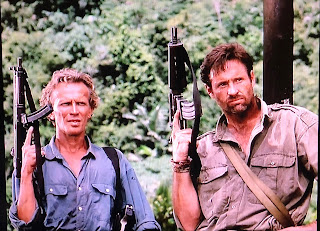 Fifty/Fifty, I believe, was mishandled and mismarketed to such a degree that it potentially hurt it's appeal. Though clearly pushed as an action/comedy (just look at their faces on that cover), the comedy isn't very prominent (barely even there) and once it's discarded by the second half, you've already completely forgotten about it before then. The second half is where this really delivers once it becomes a full-throttle action film, expertly shot and choreographed set pieces, graphic bloodshed, and impressive stuntwork where our hero's turn into true badasses. It's a true shame this angle wasn't pushed harder, because ultimately a lot of people missed out on a great action flick.

By no means a game-changer, Fifty/Fifty succeeds as well as it does because of Charles Martin Smith's excellent direction and Peter Weller and Robert Hayes strong performances, who's ability to play off each other so well reminded me of the type of on-screen pair-ups you rarely see anymore. It's an overall better-than-you'd-expect experience that surpassed my expectations at every turn, delivering a pretty great action flick all around. Think Tango & Cash, only set in the jungles of South East Asia. Fun Fact: Stallone and Russell were originally set to star in this flick before they decided to do Tango & Cash instead, leaving the doors open for Weller and Hayes to take over.

I think you'll be surprised at how good this film is, if you can look past the semi-lame marketing material. The film carries a much harder edge than the promotional and marketing department give it credit for. If  you're looking for a good solid action flick, give it a watch! You might be surprised.

How to see it:
Currently you can find it on a variety of formats, but not on Blu-Ray yet, and none of the previous releases offer it in widescreen sadly, but the dreaded full-frame. I would love to see this in widescreen someday because it's a great looking movie where Smith does a fantastic job giving the film a lot of scope for such a small budget, making full use of it's exotic locations. Currently it's VHS, DVD and Laserdisc releases are fairly affordable and easy to get, and I'd highly recommend grabbing one.

Posted by robotGEEK at 6:35 PM