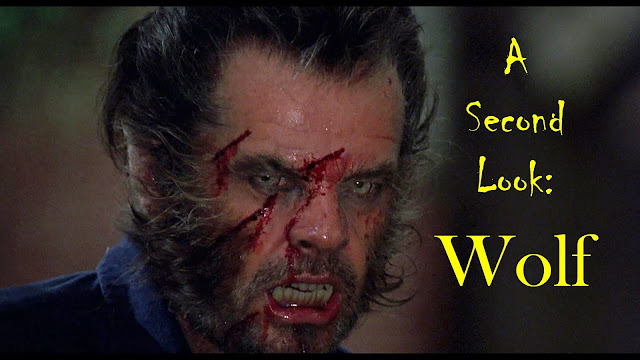 Back in the early 90's, Hollywood began revamping Universal's classic monster lineup in a series of big budget classy updates that were met with mixed reviews and unfortunately didn't kickstart a whole new franchise the way the studio's hoped they would. Hiring some of the biggest names in films didn't seem to make a difference either. Yet, you look at Francis Ford Coppolla's Dracula (1992), Kenneth Brannah's Frankenstein (1994) and Mike Nichol's Wolf today, and they're damn near masterpieces. Somehow they just didn't connect with audiences and I honestly can't explain why. Every time I revisit Dracula I'm just floored by how incredible it is, and while Frankenstein isn't my favorite in the bunch, it's a very well made film in it's own right.

Which brings me to Wolf, directed by Mike Nichols, a filmmaker who's more known for his drama's and dramadies than anything else. I remember seeing Wolf when it first came out, yet somehow have neglected ever since. I wish I could tell you why, because after having revisited it for the first time in decades and just being completely blown away, I have no answer. But, here we are so let's dig in. 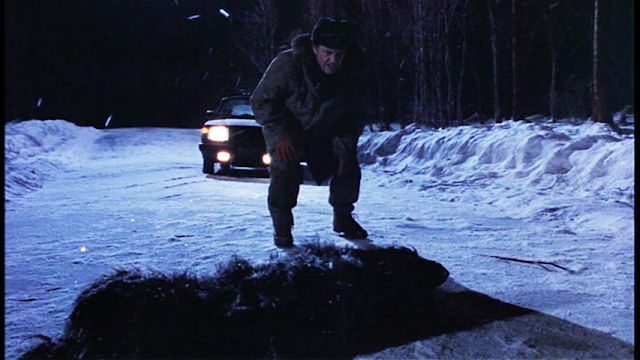 Wolf is a classy adult horror/thriller, a rare genre that never gets the love or recognition it deserves. It's the type of film that doesn't need to rely on gore, nudity or jump scares to get the job done. While I also love those specific things and enjoy movies that cater to them, I can also appreciate something a bit sedated like this, where most of the power comes from the storytelling, excellent direction and knockout performances. Candyman is another excellent example of this type of film, where mood and atmosphere is front and center, laying a strong foundation for a great story and even greater film.

Mike Nichols shoots Wolf in a very subdued way, never going full-on stylish, instead relying on the tight script and strong peformances to move the film along. Yet at the same time, he infuses the film with plenty of visual "references", such as the constant use of cages, bars and fences. You'll see them everywhere, even in the scenes where someone is riding on an elevator. You can tell the production team and set decorator took great pains in finding just the right locations to shoot. Nearly every building, hallway, house and even a lot of the exterior city shots had to have some sort of "cage" feel to them, and it's marvelous. It might not be something so identifiable at first, but if you pay attention, you'll see what I mean. 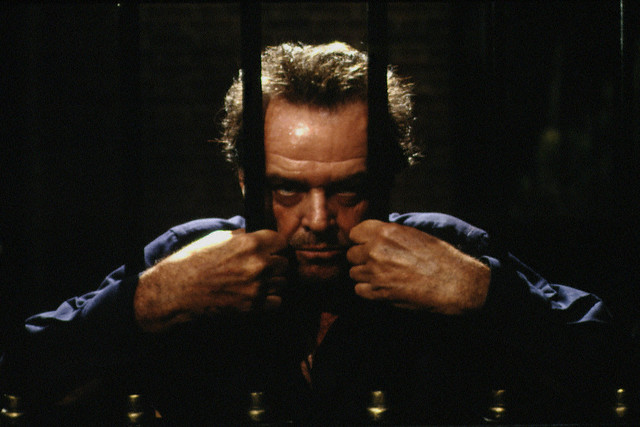 The casting is nothing short of perfect here. Nicholson, in an understated performance, does a helluva job as the mild-mannered publisher who, upon being bitten by a wolf, starts exhibiting odd behavior, with heightened senses, abilities and strength. These moments are great. You don't see good ol' Jack playing it calm and cool the way he does here. Even in the moments where any rational human being would explode, he's simply passive and it's such a stark contrast to what you'd expect from someone of his caliber. But for me, the real money shots are in the second half, after he's transformed. Seeing a middle-aged Jack Nicholson, complete in werewolf makeup, running around chasing victims, ripping them to shreds and protecting his new love against a menacing villain of equal strength is fan-fucking-tastic.

Speaking of the villain. If you haven't seen it yet, I won't spoil it for you here, but let me just say that what a spirited casting choice that was, and quite brilliant I might add. One of the reasons I loved this bit of casting was because at the time, this actor was sort of going through a dry spell per say. After making a big impact in the 80's, he would work continuously throughout the 90's, but mostly in minor roles. He would find a huge resurgence in the 2000's, thanks to a hit TV show, where he's continued to enjoy his newfound success. But here, he's just incredible and Wolf is a much better and stronger film because of his casting. 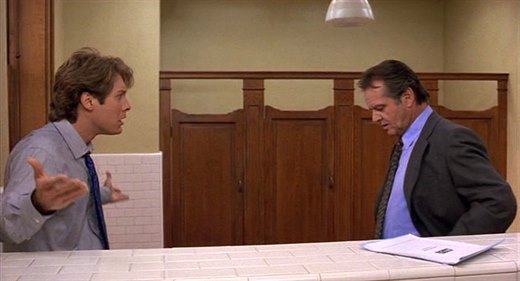 It should also be noted that legendary effects master Rick Baker provided the effects for this, and they're fantastic, with the climax being especially impressive. Legendary composer Ennio Morricone provided the eerily effective, yet classy score and adds yet another layer of class to the production. All of these elements make Wolf great, but it in the end it all comes down to Mike Nichol's direction, and though he had never dabbled in the horror genre before, you'd never know it. He handles it like a pro, but with an elegance and sophistication not usually seen in these types of films. And for that, Wolf is a cut above the rest.

While not one that people immediately remember (Dracula seems to be most people's favorite), I urge you to give it another go. It's smart, classy and sophisticated horror/thriller that delivers the goods in a fundamental way. Unlike Dracula and Frankenstein, which are period pieces that rely heavily on effects and strong production design, Wolf sets itself apart by taking place in a modern day city, circa 1994. It's outstanding cast, strong production design courtesy of Bo Welch, Morricone's hypnotic score, Rick Bakers impressive effects and Mike Nichol's sure-handed direction all lend themselves to an excellent film experience. Maybe it's time you revisit this underrated monster classic? I'll bet it's better than you remember.