80's Action Attack!: The Soldier - The Greatest Arthouse Action Movie Ever Made 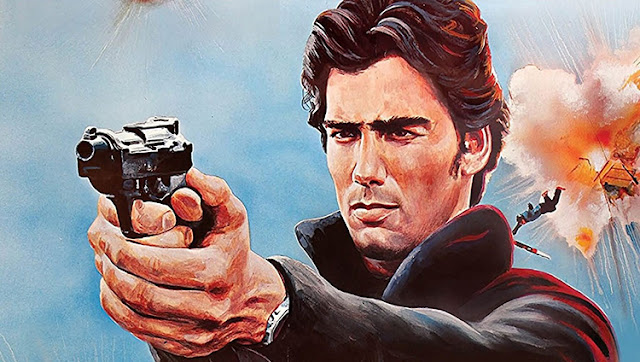 Arthouse Surrealism Combines With Ultimate Action in The Soldier (1982)


September 19th, 1980 saw the release of The Exterminator, a film by an up and coming  filmmaker by the name of James Glickenhaus that did incredible business. Made for only $2 million, it grossed $35 million during its initial release. Adjusted for inflation, that adds up to $105 million in 2018 money. That’s a lot of guap for a low budget grindhouse style vigilante movie. After The Exterminator’s massive success, Glickenhaus got a call from a financier to make an action movie as long as he used international locations in which said financier already had money placed. Glickenhaus immediately went to work, and the culmination of that was… The Soldier.
Released on August 27th 1982, The Soldier was only a minor success, earning nowhere near the grosses that The Exterminator pulled in. But that’s fine, because as much as I love The Exterminator, I think The Soldier surpasses it in every way. But don’t just take my word for it. Somebody else had to have found the footage impressive, because Glickenhaus’ next movie after this was the Jackie Chan vehicle The Protector. So that’s saying a lot right there. I mean, Jackie ended up hating the finished movie (I love it, though. Who cares what Jackie says?), but he obviously liked what he saw in The Soldier enough to pick him as director for his second big attempt at making an international cross over (The Big Brawl being his first).
But there’s something more to The Soldier than just badass stunts and action. So much more. And that something more is… Surrealism. This movie is so surreal it is practically an arthouse action movie. Hold on… Now that I think about it, this is definitely an arthouse action movie. What’s an Arthouse action movie, you ask? Well, according to Wikipedia, “The arthouse action genre is an emerging film genre in contemporary cinema that traces its roots back to Asian and European films.” Some examples listed were Haywire, Looper, Ghost Dog: Way of the Samurai, Sorcerer and Drive. I don’t know about Haywire or Looper, but I can fully attest to the validity of Ghost Dog, Sorcerer and especially Drive being Arthouse action. But what about The Soldier? What makes it so Arthouse? Let’s find out!

“THEIR LEADER. CODENAME: THE SOLDIER.”

The Soldier stars Ken Wahl as a government anti-terrorist agent known only by his code name: The Soldier. He takes on his most dangerous mission yet as he’s tasked with stopping rogue Russian bad guys from blowing up a Saudi Arabian oil field. And that’s pretty much it…

“THEY’RE CHANGING THE GAME IN A MAJOR WAY!” 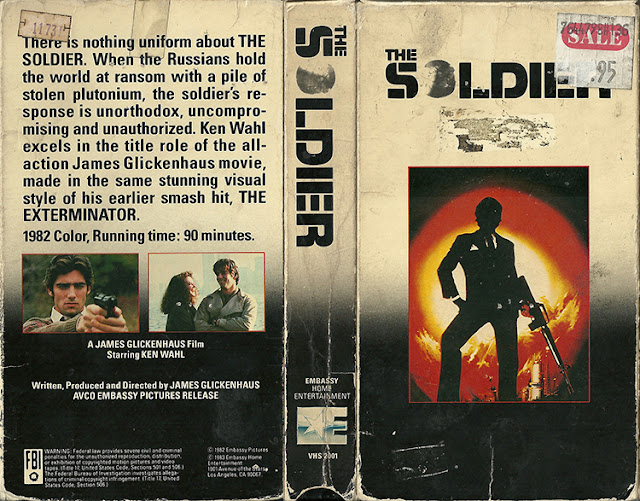 I’ve seen many action movies in my time, but never one more awesomely badass yet so artistically strange (For this type of movie, I mean) as The Soldier. It’s a film that’s simple yet almost avant garde in its storytelling. It’s like Glickenhaus wants you to figure out what’s going on instead of him having to tell you. Just pure storytelling by images, with minimal dialogue. I love that. I love a filmmaker who rejects the “hand holding” style of filmmaking that has been so prevalent in movies, even to this day.
Take the first scene for example. I’m going to try to avoid spoilers as much as possible because I want you to see this movie immediately (it’s just been released on for the first time on DVD and Blu Ray by Kino Lorber), so I’ll be very vague in my description of the scene: It involves a limousine, 3 bystanders, a woman with a baby carriage, a bucket load of bullets flying, and a helicopter. And I promise you, it is the most WTF opening to an action movie ever. Matter of fact, the first 20 mins of the movie are all so incredibly WTF. Glickenhaus creates a puzzle with his scenes, but gives you just enough to put it all together without having to explain it. But you better think fast, because the pace of this movie is absolutely relentless!

“ONE MAN. ONE UNIT. RENEGADE AGENTS OUT TO SOLVE A CRISIS…” 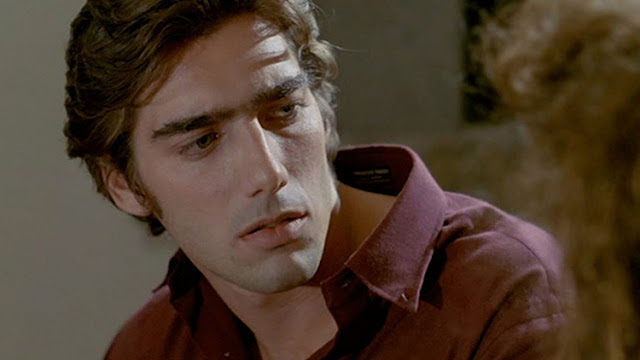 Oh yes. The Soldier moves at breakneck speed, rarely letting up for a second to let you catch your breath. Glickenhaus improves considerably from the deliberately slower pace of his previous movie by giving the audience so many awesome action moments so fast throughout the movie’s brisk running time that it almost feels like one long action scene. It all just beautifully blends together. Glickenhaus really came into his own with this movie, proving himself to be the most underrated action director of his era, and quite possibly all time.
And the way every shot is set up and executed gives the whole movie a dreamlike, almost haunting quality. Especially with Tangerine Dream composing a pulsating, but almost trance inducing electronic score. The movie feels like you’re sitting inside the mind of a 13 year old David Lynch who’s dreaming he’s a rated R version of James Bond. It’s all so awesomely straightforward, yet beautifully weird. You wanna know how weird? Klaus Kinski shows up in a damn near wordless cameo wearing an all white ski suit that Ned Flanders would love, but would piss Homer Simpson off. That’s right. Klaus Kinski. Werner Herzog’s favorite actor himself. And all he really does is have a tense staring contest with Ken Wahl in a cable car. I. Am not. Kidding.
The acting is serviceable enough. Ken Wahl isn’t going to win any awards, but he’s pretty good in the lead role. Tough and effective. Glickenhaus reportedly wanted Tommy Lee Jones for the part, but the studio wanted Wahl. Although I weep to think what could have been had Jones gotten the part, the movie works just fine with Wahl. I have no complaints. The supporting cast isn’t so bad either, with familiar faces such as Alberta Watson, William Prince, Joaquim de Almeida, the aforementioned Kinski (Who shouldn’t really count, because he’s only in the movie for like 3 mins, and says nothing for 2 and a ½ of them) and the late, great Steve James all making appearances.

“THEy DON’T SOLVE PROBLEMS. THEY TERMINATE THEM!”

But… I know, I know. You come here to read about action. Well, you’ve come to the right place, because The Soldier is full of it! The first hour of the movie is a non-stop rollercoaster ride. I know that sounds like hyperbole, but it’s the truth. The god honest truth. This movie just does not stop! Shootouts, car chases, fights with ninjas, ski chases and more slow motion explosions than the climax of a Michael Bay movie. And the stunt work is simply fantastic. You’ll really be blown away by the stuff they accomplished on the low budget they had. There is an especially spectacular stunt that’s caps off an exciting ski chase in the middle of the movie. You actually get a glimpse of it in Shakedown, also directed by Glickenhaus. It’s the movie Sam Elliott is watching in the theater when we’re introduced to his character. But, even that small clip doesn’t do the stunt justice. It’s a stunt that you can only fully appreciate when you watch it in its entirety.

“THE SOLDIER. YOU DON’T ASSIGN HIM. YOU UNLEASH HIM.”

The whole movie is like that for that matter. The Soldier truly stands out by refusing to be just like every other movie of its kind. It contains everything you recognize and love about those type of movies and does it its own way. No care at all to even try to fit in. And as an action movie junkie, that’s so rewarding. And we all have Glickenhaus to thank for that. Hopefully, my review has piqued your interest enough to seek this out as well as his other films. Because, in my opinion, recognition for the man is long overdue.
21 Gun Salute…

Posted by robotGEEK at 3:36 PM