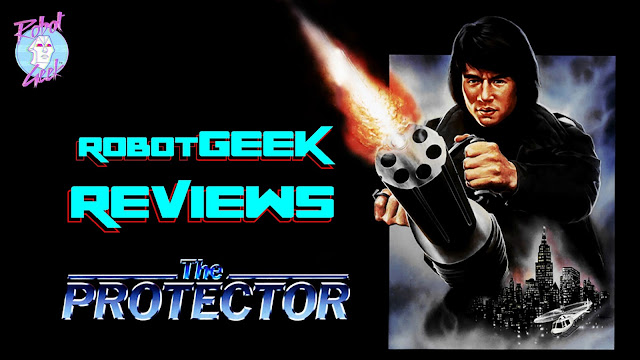 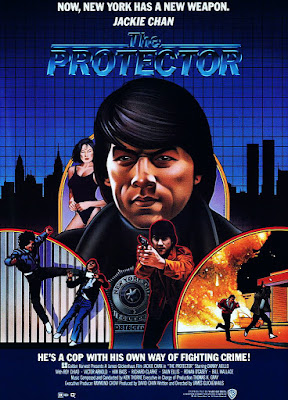 It's safe to say that writer/director/producer James Glickenhaus hit it big with his Grindhouse classic The Exterminator in 1980, a film who's box office gross far outnumbered it's original budget, resulting in a certified hit. He would follow that up with The Soldier (be sure to check out Cinema Drunkie's excellent review!) two years later, a sort of arthouse action thriller that was way ahead of it's time, but has since gained a huge cult following. After The Soldier he was propositioned by the legendary Hong Kong powerhouse Golden Harvest to do a Jackie Chan film, in the hopes of transitioning his stardom over to Hollywood. Glickenhaus's main objective was to deliver a different Jackie Chan film. He wasn't interested in doing another martial arts film. He wanted to introduce a tougher, more gritty Jackie Chan film, and while Glickenhaus and Chan didn't see eye to eye, resulting in two different cuts of the film (which I'll get into later) there's no denying that their one-time collaboration resulted in one of the best films of both Jackie Chan and Glickenhaus's respective careers.

In Glickenhaus's version, he attempted to deliver a tougher film than any Jackie Chan fan had ever seen before, and the result is The Protector, a kickass gritty cop thriller that once again showcases Chan's incredible physical abilities, while at the same time showing the world, and most importantly, Hollywood, that he could in fact play it serious without the slapstick comedy. Through broken English (it's better to watch it with subtitles), Chan curses for the first time in a film, kicks a whole lot of ass and takes names. In short, The Protector is awesome. Just epicly awesome in a very 80's gritty action thriller sort of way, and it's a damn crying shame it isn't more loved or more highly regarded as a certified action classic. 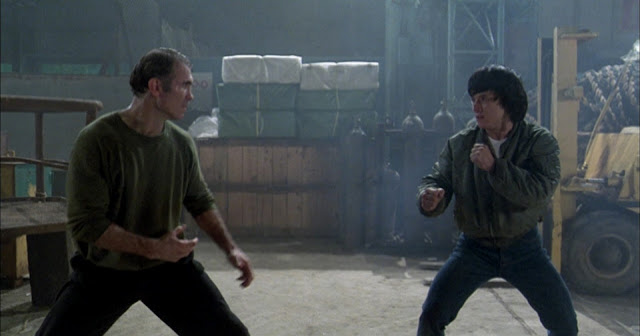 I remember when this came out, and how it pretty much bombed at the box office. I even remember watching it myself, because back then in '85 (I was 9), I was a huge martial arts fan, and devoured any Jackie Chan film I could get my hands on at the time. So I was all over this, only to realize that the martial arts fighting had taken a back seat to car chases, foot chases and shootouts. I didn't like it, and had completely dismissed it all of these years. Remember I was only 9! And apparently an idiot.

33 years later while I'm thick in the middle of a serious James Glickenhaus kick, I discovered that he had directed this before he did the insanely badass Shakedown, and immediately set out to revisit, or rediscover I should say, this little misunderstood gem of a movie. I figured if he could deliver something as incredible as Shakedown, and The Protector was his prior film, then maybe there was something to it that I missed all those years ago? And I was right about that. And boy was I wrong about my initial feelings towards it when I was 9. Dead wrong.

The Protector is a very special film. It works in a way I hadn't anticipated, while also giving us the Jackie Chan we always loved, because despite the fact that Glickenhaus did not want to deliver a martial arts film, there is still plenty of that to be had in here, and it's glorious. But I loved the other moments, where Chan is just being a tough badass, sporting those retro cool blue-blocker style shades and taking a beating as much as he gives them. Reportedly, Chan didn't know much English at this time, and it shows. Though to be fair, he does a great job considering he didn't speak the language. And it doesn't really matter, because despite his grasp of the language (use subtitles), Chan delivers the goods in every other conceivable way, and if this film did anything for me, it's that it convinced me that I really need to dig into his older "crime action/thrillers", which I've never done before. 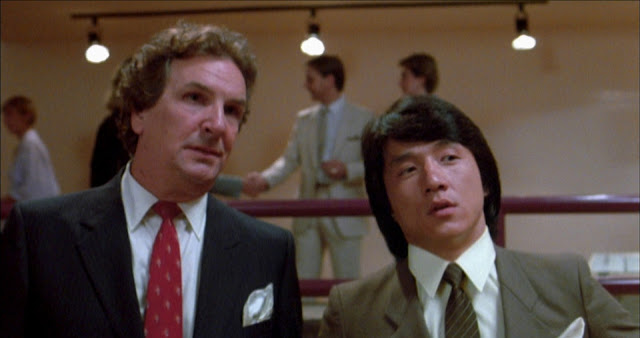 I have to say, as much as I loved Jackie Chan in his first serious American outing, the real standout for me here was Danny Aiello. I know, I know. Hear me out. While we mostly think of Aiello's comedy or dramatic turns in classics like Moonstruck, Do The Right Thing, Hudson Hawk and hell, even his small role in The Professional, most people forget, or just don't know, that he has dipped his toe into action from time to time. While initially caught off guard by his presence here, I have to admit that he immediately won me over within just a few short minutes. It's a bit jarring to see a younger, thinner Aiello playing a tough New York cop, but I'll be damned if he doesn't pull it off flawlessly. Sure he's not in any better shape than he is now, just thinner, but that doesn't stop him from constantly hitting on every female he sees, and he doesn't mind stripping down to his skivvies when duty calls. Danny Aiello's uncanny ability to transition to a skirt-chasing tough guy New York cop who travels to Hong Kong with his partner Wong (Chan) in tow, blasting his way through the city is a sight to behold. Make no mistake. Danny Aiello is a true badass in here and is given several moments to shine.

When I recently watched Shakedown for the first time, I was blown away by not only the action sequences, which were incredible, but by how well James Glickenhaus directed it. Revisiting The Protector has only validated my opinion and impression on the guy, and that is that James Glickenhaus is easily one of the most underrated action directors ever. How he's not more well regarded in the industry as a solid filmmaker, or why his films (of which there are only 8), aren't considered classics just blows my mind. Any of his 80's credits can stand toe-to-toe with any of the best that decade had to offer, yet nobody remembers them or even knows his name. It's a true crime if you ask me. 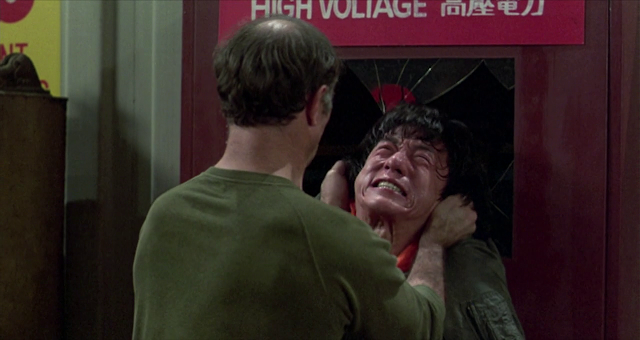 The Protector, despite it's reputation and weak box office performance, is one helluva solid action thriller. There are plenty of hand-to-hand fights to keep the old school Jackie Chan fans happy, while also giving the film a strong gritty flavor that most just weren't ready for at the time. Still, it has so much going for it that I hope people will see now, like the plethora of old school action, violence, and Glickenhaus shoots it all with a clean style, never swaying too far into gritty or over-stylish. If you ask me, it's a quintessential 80's action/thriller and if you've never seen it, or it's been a very long time since you have, I urge you to give it antoher shot. You just might be surprised at how great it is and what you've been missing.

It would take 10 more years before Jackie Chan found his mainstream success here in the states with Rumble in the Bronx in 1995. He's since enjoyed healthy success both here and back home where he continues to work within both comedy and the straight-up action/thriller genre's, with his recent The Foreigner being a great example. 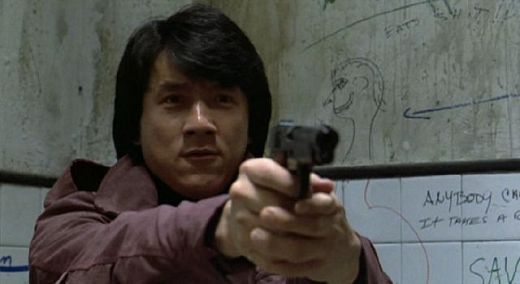 The U.S. Cut VS. The Jackie Chan Personal Cut

It's no secret James Glickenhaus and Jackie Chan didn't see eye to eye with this project. While Chan was trying desperately to break into Hollywood, especially after the failure of his previous effort The Big Brawl, he still didn't agree with a lot of Glickenhaus's choices. While there surely was tension on set, both men speak politely about their experiences, though to be honest Glickenhaus comes off a bit narcissistic and bitter, but in a passive aggressive sort of way in his new interview located on the Special Features of Shout! Factory's Blu-Ray release from 2013.

Chan was so dissatisfied with how the film turned out that he immediately re-cut it for the Asian market, and even went so far as to film an entire new subplot with actress Sally Yeh (The Killer). Some other major changes include removing all of the random nudity, curse words and toning down some of the violence, while also making the fight scenes longer, including shooting some brand new ones that lean more towards the comedic side. It's literally an entirely different film experience and while I can appreciate Chan's feelings towards this and how it does gel more with the Hong Kong style of martial arts film, I have to say that I much prefer the U.S. cut. It's such a bold new sort of film for both Jackie Chan and the action/thriller genre in general as most of the film takes place in Hong Kong, with our New York cop protagonists essentially being "fish out of water" in a drastically different environment.

Still not satisfied, or maybe it was because he enjoyed working in that new type of genre, or hell, maybe both, Jackie Chan would write, direct and star in his own gritty cop/thriller Police Story that very same year in 1985, which would go on to achieve massive success, resulting in several sequels and newfound fame for Chan in the action/thriller genre.

How to see it:
I have great news for those of you who want to see this in HD. Shout! Factory released this on Blu-Ray as part of a 2-film set along with 1993's Crime Story in 2013. I can tell you that the new transfer is impressive, and the Special Features alone are worth the price. I'm actually shocked they just didn't release The Protector as a standalone film, considering the extras included make it a pretty great release all around. It surely could have benefited from the original poster art, because this cover is just terrible. I might just end up making my own. 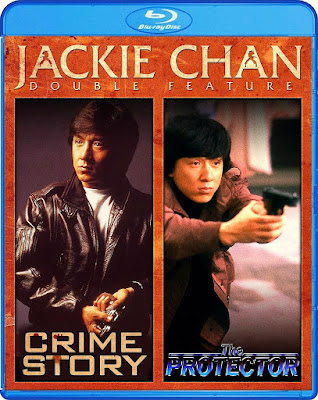 The extras included for The Protector are:

That's a lot of fun stuff to dig into, with the new Glickenhaus interview being both informative and fascinating, making it easily the best of the bunch. He speaks candidly about how the project came about, his working relationship with Jackie and what he was trying to accomplish with it. The "Locations: Then and Now" is equally fascinating in how much New York has changed since 1985. The Behind the Scenes is amusing as it shows a lot of outtakes and flubs in a more lighthearted way, keeping in line with Chan's use of outtakes for the credits. The different trailers are equally fascinating in how drastically different the film is portrayed. The HK trailer really makes it look like any typical HK action flick, complete with a totally different score and even going so far as pretty much giving you the entire film in just a few short minutes, not leaving any surprises for the filmgoer, whereas the U.S. trailer gives it a much more gritty and lean representation as a cop/thriller, minimizing the action and fights. Fascinating stuff!

The Shout! Factory Blu can easily be picked up for under $10 anywhere you buy your Blu's online, and trust me, it's one you'll definitely want to add to your collection.

The Protector is a grossly overlooked gem and an excellent entry into the 80's cop/action/thriller genre. It marks another winner for James Glickenhaus's impeccable track record of delivering kickass action/thrillers and introduced the world to a harder, tougher, cursing Jackie Chan. This insanely enjoyable classic is begging to be rediscovered, or discovered for the very first time. Take the chance. I'll bet it's better than you remember, or a damn fine film experience if it's your first time.