A Second Look: End of Days 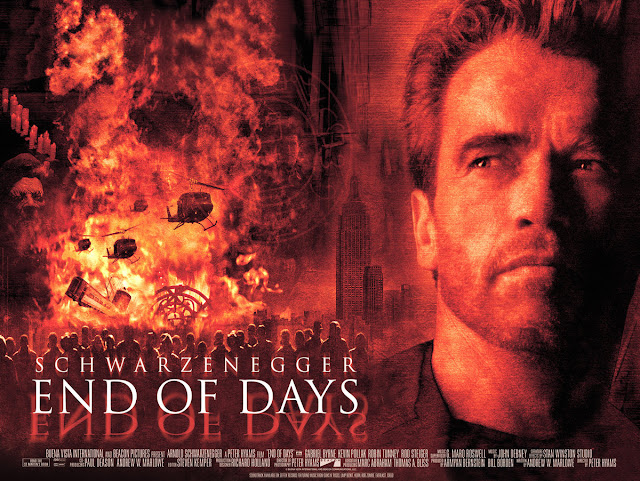 As much as I've been a die-hard fan of both Arnold and writer/director Peter Hyams nearly all my life, End of Days has always been a film that I didn't care too much for. In fact, I maybe have only seen it less than a handful of times. It just never really connected with me in any way that I could enjoy. I always felt that it was a weird choice for Arnold, and that Hyams was capable of better, which he had proven to me over and over again throughout the 80's and 90's. And though I actually took the time to watch End of Days a few times, I just could never get into it.

Flash forward many, many years and here I am in yet another one of my Peter Hyams binges. I tend to go through these about once every year or so (he really is one of the best directors ever). So I decided to give this one another shot, because I've noticed this past year I tend to change my mind drastically when I revisit a film, which is what kickstarted my new "A Second Look" series of reviews. Raw Deal, Licence to Kill and Waterworld are some solid previous examples. So let's dig in.

When Satan takes over the body of a local New York businessman, he sets his sights on a new bride at the turn of the century. Local ex-cop Jericho (Schwarzenegger) works as a security expert who stumbles upon this plot and vows to protect the woman Satan plans to marry at all costs.

Despite my previous experiences and feelings about this film beforehand, End of Days managed to turn all of that completely on around this time out. This time it managed to keep my attention, and I noticed things I hadn't either taken the time to before, or just flew right over my head. For starters, this is surprisingly one of Arnold's best performances. I know, I know. It's crazy to even think that, but it's true! As crazy as it sounds, Arnold gave one of his most heartfelt and strongest performances as a man struggling with the loss of his family, and finding a way to continue, always close to falling over the edge.

The always reliable and "busy" Gabriel Byrne turns in another fantastic devilish performance here as Satan himself. Sure you could argue that his accent comes and goes (I honestly have no idea what type he was going for; Irish, English, Chicago?), but he sure has a helluva lot of fun doing it. Plus, he just looks fucking cool drenched in all black. Oftentimes, it's the moments when he doesn't say a word, but just gives you that devilishly fiendish look that makes him the most chilling. 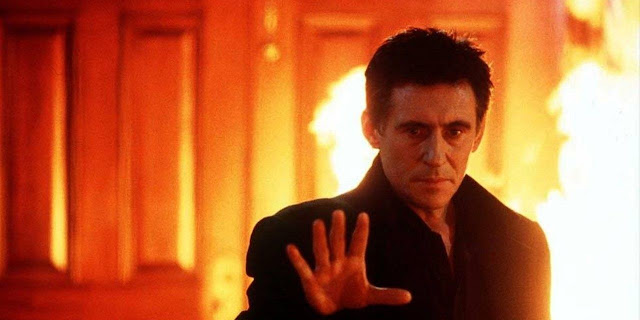 As strong as the performances are, Peter Hyams, once again working as his own cinematographer, is the main reason the film works as well as it does. While it's a familiar story told many times, Hyams' magic with the camera is what makes this one a standout. Much like his previous effort The Relic, and totally unlike most of his other films, this film is dark. Not only in tone, but in it's aesthetic and use of shadows and blacks instead of natural light. This particular moment in his career saw him using a lot of muted colors of browns and gold, bathed in darkness. In fact, with The Relic and End of Days, there was hardly a moment that took place during the day or in sunlight. Purposeful of course, but not entirely unnoticeable either. Still, his particular sensibilities behind the camera work wonders with the visuals here. With this film in particular, there's no surprise that there's little action, because it's not an action film. Yet, despite it's horror/thriller genre, screenwriter Andrew W. Marlowe (Air Force One, Hollow Man) can't help but infuse "some" action because it is an Arnold Schwarzenegger film after all. And this is where Hyams blows nearly every other director out of the water in the action genre with his deft use of precision editing and camera setups. Once again, the legendary writer/director/cinematographer proves, rather flawlessly, why he was one of the best filmmakers working.

If you were wondering why Arnold was noticeably thinner and less bulky this time around, it's because he had just had heart surgery after a scare, and this was his first film in 2 years. Of course, thinner Arnold is still a much bigger version of any normal human being, even the ones in excellent shape. It's interesting that his first collaboration with such a legendary filmmaker was a horror/thriller rather than a straight-out action flick. It's amusing to think of what they could have made together in that genre, a genre that Arnold personally dominated for a number of years, and one that Hyams delivered the goods in with classics such as Sudden Death and Timecop.

One of the films most interesting positive attributes is it's stunning use of practical effects work. Believe me, I'm as surprised as you are. The 90's isn't generally regarded as a good moment in effects history, but the effects team here was on point and through the use of limited CGI, old fashioned model-work, and Hyams ability to mix it all together effectively, End of Days surprised me at every turn with it's stellar effects work.

Is it perfect? Certainly not. There are a few moments that trigger a response that you don't expect. Like the sequence when Jericho (Arnold) fights with an old heavyset lady and she actually gives him a run for his money. Or the moment when Christine (a sexy Robin Tunney), the object of Satan's desires and pursuit, claims she's been dreaming of him all her life, yet he just barely took the form of his new host a few days before. Minor issues of course and nothing that takes away from the enjoyment of the film in general. 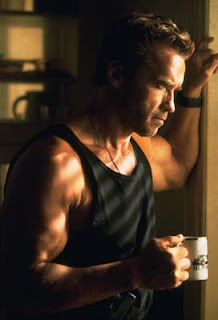 Released in 1999, End of Days would mark the last good/great Peter Hyams film. His 2001 followup The Musketeer was met with dismal returns and universally panned by critics and moviegoers. 2005's A Sound of Thunder and 2009's Beyond a Reasonable Doubt followed suit. When it was declared that Hyams would return to the directors chair and the action genre and re-team with Jean-Claude Van Damme for 2013's Enemies Closer, I was over the moon excited. Until I saw the film, which I just did not like.....at all, for a number of reasons. Gone was the visual stylist I adored for so many years through many, many films, and Van Damme just seemed both exhausted and far too over the top for my taste as the villain. It was a sad closing chapter for Hyams career as a strong director, but if End of Days can prove anything, it's that even as late as 1999, Peter Hyams proved that he was the best and delivers the goods in the most unexpected ways. It might not be considered a highlight in his career, but it should be. If it's been a while since you've seen it, or if maybe you've never seen it period, give it a shot and keep an open mind. It might surprise you with how great it is.

How to see it:
Released on DVD in 2000 and Blu-Ray in 2008, they run fairly cheap. While I didn't watch it on Blu Ray myself, I can say that the DVD is a pretty solid source. But having finally revisited and loving it, a Blu-Ray upgrade is definitely in order for the near future.