The truth is that Waterworld, despite it's reputation and many flaws, isn't a bad film at all. In fact, it's quite incredible and damn near a masterpiece of sci-fi action

We all know the story of Waterworld right? Plagued with production problems right from the start, the film would ultimately go onto box office infamy as being one of the costliest box office bombs ever, right up there with Cutthroat Island and Dune. At the time of it's release, it was the most expensive film ever made, with Costner investing 22 million of his own money into it. It's widely been panned by critics and often referred to as a mega-flop, even before the film was released. Only, when you look at the real data, it's actually not a flop at all, despite all the negative press and reports. In fact, while it would never be considered a hit, it did in fact turn a small profit after video sales. So unlike other mega-budget epics that actually failed to turn a profit, Waterworld is not one of them. Yet even to this day, despite decades of correct information at our fingertips, it's mostly dismissed and labeled a disaster.

1995 was a tough year for cinema. Though the 90's was an awesome decade for film in general, that era wasn't devoid of it's own number of big budget flops, with the biggest headline makers being Stallone's Judge Dredd and Renny Harlin's Cutthroat Island (2 films that I absolutely LOVE ). So maybe because of the bad publicity of these 2 sinking ships, or maybe because of the early word of mouth that the film (already with such an inflated budget that there was no way it could possibly make that back through ticket sales stateside) was already labeled a disaster in the making, Waterworld was in a sense, predestined and doomed for failure. It doesn't help that the behind the scenes turmoil between star Kevin Costner and his longtime friend/director Kevin Reynolds was making headlines....again (same thing happened with Robin Hood in '91), with Reynolds, again, leaving the project before it's completion, leaving Costner to finish with editing duties himself...again. What's surprising to me though, and I'm sure to most others, is that despite their tumultuous relationship, Reynolds and Costner (the two Kevins as I like to call them) would work together a total of 4 times, most recently on the Hatfields & McCoy's Mini-Series in 2012. 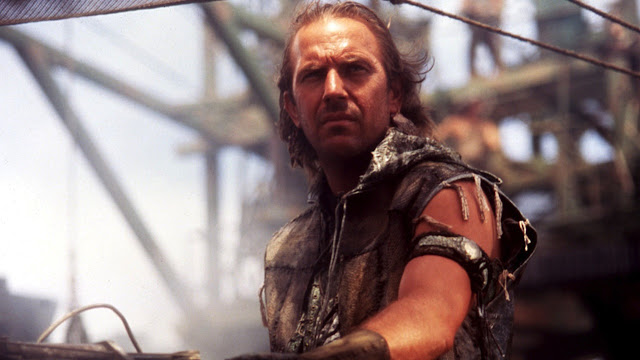 Knowing all of this already, I was excited to head back into the world of Waterworld, because 1), I hadn't seen it since it came out and remember almost nothing about it, and 2), if Cutthroat Island taught me anything, it's that I shouldn't believe the negative hype and just enjoy it for what it is, and that's pure epic popcorn entertainment. Let's dig in.

Waterworld, despite it's negative reputation before, during and since it's release, is hands down one of cinema's biggest spectacles for a number of reasons. It's epic filmmaking on a grande scale done in a way that hadn't been done before, or since. It's massive budget is evident on nearly every single frame of film and it's a glorious masterpiece of post apocalyptic cinema. Here, instead of utilizing the desert wasteland as was so often the case before, they instead to choose the ocean, with the idea that because of the polar ice caps melting, the entire planet has been submerged in water. To survive, the last remaining inhabitants of the planet have been forced to build structures above the water utilizing any last bit of remaining hardware and supplies they can find. In doing so, this creates a sort of Mad Max on water aesthetic that is a true sight to behold. The fact that real sets were built for everything you see is such a gargantuan task, yet, despite all of it's troubles, they pulled it off in a way that will blow your mind. Simply from a set technical and design standpoint, Waterworld will blow your mind.

The action sequences take center stage here for a number of insanely large sequences that utilitize precision  stunt choreography to pull of some of the most mammoth action sequences you've ever seen, and on water to boot, making it all the more impressive. Are they the best action scenes I've ever seen? Certainly not. But they're impressive, no matter what way you look at it. The amount of technical savvy put on display that utilizes death-defying stunts, explosions, jet ski's, planes, boats, guns, fire and a whole lot of water (sometimes all at once!) is hands-down legendary, making this one of the best examples of post apocalyptic sci-fi action ever to grace the screen in the last 50 years. While I would never consider Kevin Reynolds to be a stylish director, he gets the job done in a professional way, often with a large budget, who's proven himself to be reliable behind the camera when he's not walking off set and away from a project after a fight with Costner. Which reminds me, I need to revisit Robin Hood. 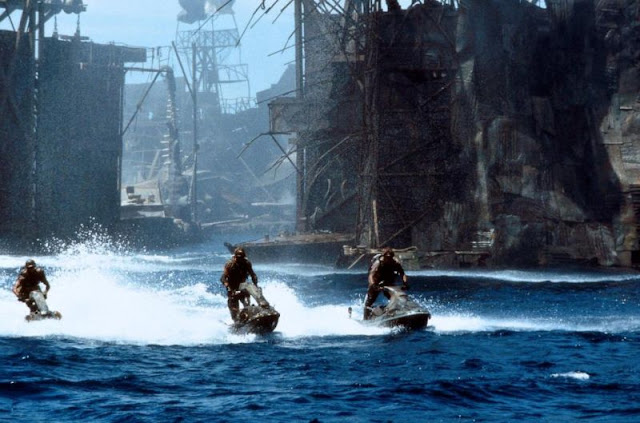 If there was anything I would complain about, it would be that the film drags a little too long in the human elements, where the Mariner (Costner) and his two companions are getting to know each other, where the Mariner pretty much acts as a mean-spirited and bullish brute. Still, despite these moments, and despite the fact that some would consider Dennis Hopper's hammy performance a bit too much, the film, while quite long, delivers a large bang for your buck in the entertainment department. Once it begins to feel as if it's overstaying it's welcome, another incredible action set piece kicks your ass and melts your corneas and you forget all about it.

It's a shame that this film could never shake the stigma of being a bomb, when the data proves that in reality, it was not. It didn't make a large profit, but it was able to make back it's budget and marketing, which would suggest that despite the bad press, it was technically in the black, not the red.

Posted by robotGEEK at 8:04 PM