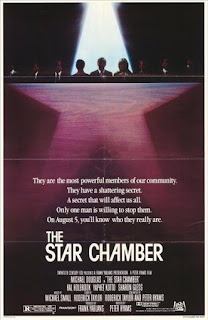 Between two of writer/director Peter Hyams science fiction classics, Outland (1981) and 2010 (1984), he wrote and directed this thriller centered around a judge who, upon getting frustrated that criminals escape justice due to technical formalities, joins a group of elite judges who take the law into their own hands to disband their own brand of justice. They are known as The Star Chamber. But once Hardin (Michael Douglas) discovers that a mistake has been made, implicating the wrong persons responsible for the death of a child, he soon discovers he may be way in over his head and once the wheels are put in motion, he can't stop it.

Going into this one, I literally had never heard of it or even knew of it's existence until I did a quick IMDB search of Hyams' filmography. Doing some further digging I found the old VHS cover, which quite honestly is a total misrepresentation of the film as a whole. So maybe I did see that cover back in the 80's at my local video store, but I can guarantee you that I would never have given it a second thought, because the lame cover art, and the slightly misleading title (it sounds like a sci-fi film) lead you to believe it's something else entirely. And really, that is the one and only complaint I have about this film, because quite frankly, it's pretty fucking fantastic. Let's dig in.

Peter Hyams has undoubtedly crafted a splendid thriller that delivers some of his best work behind the camera, while also giving us, the viewer, ample amounts of thrills, tension and suspense all wrapped up in a neat little package that is as visually stunning as it is thrilling. Much like his work in some of my favorite films from his filmography, Hyams impressed me nearly at every turn with his stunning visuals and impressive use of light and shadows, something of a trademark when it comes to his thrillers. Narrow Margin is another excellent example of this. Surprisingly, he wasn't his own cinematographer yet. That wouldn't happen until his following film, 2010: The Year We Make Contact in 1984.

Michael Douglas always has and continues to remain one of my favorite actors working. It wasn't until Ridley Scott's Black Rain in 1989 that I really learned to truly appreciate his work, but it was from that moment on that I was pretty much keen to anything he did. As I watched this, where he once again delivers another solid powerhouse performance as a man struggling with his frustrations at the justice system he works for, while also grappling with his own personal morals, he exudes an intensity that you rarely see in actors these days. He really was and still is one of the best, who could pull of a cool charming adventurer in Romancing the Stone, or a total badass with a badge and an attitude in Black Rain. I would argue that this performance here ranks as one of his best, but I shouldn't have to, because it's fact. We already know this, right?? 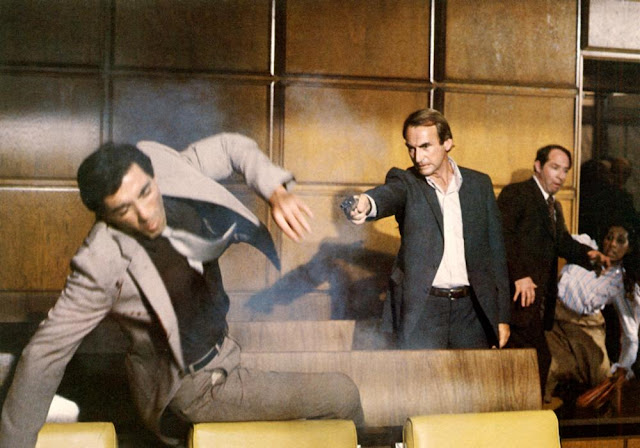 In my humble opinion, The Star Chamber is a criminally underrated thriller that rivals the best of what Hyams has to offer in this genre. Hell, it's even one of Michael Douglas' best roles and performances! The fact that it never mentioned in any conversations related to either Peter Hyams or Michael Douglas, or that it's not considered a thriller classic in it's own right, is further proof that its title was either misleading or confusing, and it's cover art, has missed the mark on every release it's received. Even as recently as 2013 (it's last DVD release), Anchor Bay decided to go a different route and it depicts a closeup of Douglas holding a gun in front of a U.S. flag or a Department of Justice seal (depending on the territory) in the background. Not only does he ever once hold a gun in the film, but it inaccurately makes it look like he's some sort of vigilante, which he's not. I won't get into the specifics because if you've never seen it, you should immediately and discover the reasons for yourself. BUT, I will say that despite it's surprisingly inaccurate covers throughout the years, it's still very much a great early 80's thriller and one of the most visually stunning I've ever seen. 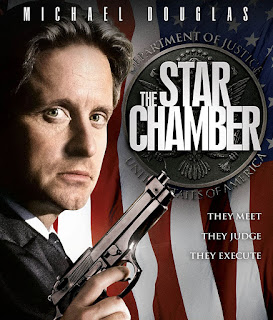 The Star Chamber (please try to overlook that title), is arguably one of the best thrillers to come out of the 80's, and one of the best in Hyam's filmography. Sadly overlooked and long forgotten, it's a film that hits all the right notes and delivers a totally fulfilling experience within the thriller genre. Visually compelling as is the subject matter, with riveting performances by Michael Douglas, Hal Holbrook and a host of notable character and veteran actors, it's a film that's begging to be discovered for the very first time. Do yourself a favor and seek this one out, you'll be glad you did.

How to see it:
Currently DVD is the only real route to see this in widescreen. Though Amazon lists a Blu-Ray for the cheap price of $100, I've never actually seen one. I do hope it gets a better release someday. It's such a visually impressive film, and an HD upgrade would be ace.

Posted by robotGEEK at 1:24 PM