If you know anything about me, or follow me here on a regular basis, then I'm sure by now you know that Dolph Lundgren is my favorite action star, and his Punisher film is my favorite Punisher film. The character of The Punisher is also my all-time favorite comic book character, ever since I began collecting comics as a kid somewhere around 1988 or 1989.

As a straight-up adaptation of the titular character, I know the Mark Goldblatt 1989 low-budget classic isn't the most accurate or best representation of the character, but it has so many other things going for it that I can easily overlook it's faults. I just love it to death and I love Dolph's portrayal of the tortured soul who decides to save a bunch of rich children from the Yakuza, proving he does in fact have a heart inside that cold exterior. Sure I would have loved to have seen Dolph don the signature black tights, white go-go boots and gloves and the giant skull on his chest, but he still looks cool in his black leather getup. Am I right??? 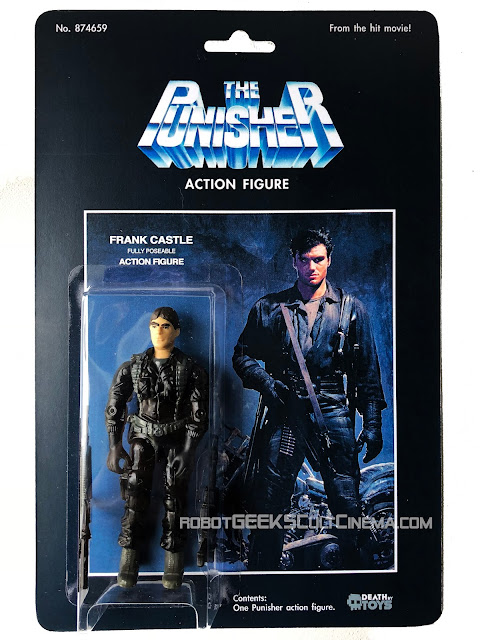 Recently I've gotten knee-deep into collecting toys again, more specifically vintage toys of my childhood. And that eventually lead to "custom action figures" in the style of old G.I. Joe's. When I met someone online who actually makes these custom figures of our dreams, the first one I commissioned was this bad boy, because I knew they would never make this dream a reality, so it would just be best to make my own, and Dan over at Death By Toys was the man to do it.

My specific instructions were to make him and the cardback size and style reminiscent of the vintage Joe figures of the 80's, but I pretty much left everything else up to him. And as you can see, he did not disappoint. I love this thing so much, and I'm over the moon about it. In fact, it's inspired me to try and start making my own soon, because there are a ton of action figures I'd love to see made from some of my favorite obscure 80's films. Stay tuned!!


In the meantime, please check out my friend Dan's shop and blog Death By Toys.