Tales From The Crypt: The Complete Series 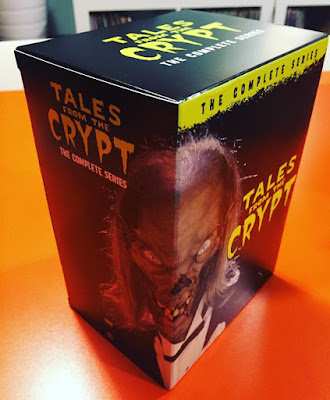 A few months ago someone mentioned that Amazon had mistakenly listed this set for far less than the actual retail price. Obviously a LOT of people jumped on it, myself included, before Amazon caught wind of this and immediately took it down, but not before I was able to snag one for myself. I can only assume that this mistake was only available for a mere few short hours before Amazon noticed the flood of TftC pre-orders coming in. And that's what this was, a pre-order for an eventual release a month later in August. But you know, if it wasn't for that mistake, and the fact that someone was blasting it on Facebook, I probably never would have given it a thought or ever considered purchasing it. You see, I am old enough to remember watching these when they first came out on HBO, beginning in 1989 and lasting 7 seasons. While I didn't watch every single one, I managed to take in roughly a quarter of them on those Saturday nights and some of them have stuck with me ever since, while a few I only remember random bits and pieces. For example, I remember Arnold Schwarzenegger directed an early episode, but he didn't appear in it. And I remember at the time how odd a choice that was for him, especially since you'd think he would naturally gravitate towards action. And then I also remember a really great episode titled "Yellow" directed by Robert Zemeckis and starring Eric Douglas. But surprisingly, I didn't love the show. I think I was maybe too young to fully appreciate it really. That's why when it was announced that this new "complete" set was being released, I didn't even bat an eye or think any more of it. I liked it, but didn't love it. But all that shows is how wrong I was all these years. When that person mentioned about this set being offered for such a cheap price, I figured it would be a fun trip down memory lane and something to watch for a long time until Halloween. And if I didn't like it, I figured hey, I hardly spent anything on it, so no big loss. I could always trade them for something else I want with fellow collectors. 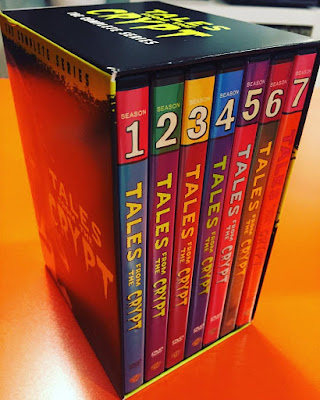 So digging into these episodes, most for the very first time, has been a huge blast of nostalgic fun.
Already knee-deep into Season 2 (Season 1 was shockingly short, but Season 2 is three times as long), I've already watched episodes, most regarded as certified cult classics, directed by Mary Lambert (Pet Sematary), Richard Donner (Lethal Weapon, Goonies), Walter Hill (48 Hrs, The Warriors), Robert Zemeckis (Back to the Future) and Tom Holland (Fright Night, Child's Play), and we've only just begun to scratch the surface of amazing talent in these episodes. I haven't even gotten into the actors! But let me tell you. What a list! If you grew up watching films and television religiously in the 80's and 90's, then you're in for a real treat. The plethora of big names and often seen, but rarely identified character actors will blow your mind.

I have to admit, having been watching about a dozen episodes now, with dozens and dozens more to get through, I can tell you that this set, no matter what the cost, is worth every penny. Knowing how good these are, and how much fun I'm having going through them, I'd be just as happy paying $100 for this set and be fine with it. It's that good. But you're in luck, because as is with any deal, the "flippers" were out in full force with this one, snatching up as many as they could during Amazon's incorrect pre-order launch, just to flip online and make a quick buck. So you can grab a brand new set of this on eBay for roughly $40-$50 with free shipping included. That's a steal and one helluva deal. My advice is to grab them while you can, because I don't know how long they'll last at this price, and like I said, it's worth every penny.

Posted by robotGEEK at 9:35 AM