Up until this past year, I'd never actually seen a Fred Olen Ray film before. I'd certainly heard of him, as he's often referred to as a schlock director, along the same lines as Roger Corman and Jim Wynorski, which is awesome to me. What's even more bizarre is that I just love that kind of stuff. So the fact that it's taken me this long to get to his films kinda blows my mind. That's not to say all, or even half, of his films are good. They're not. I've dug into them randomly and for a guy who dips his toes into everything from softcore porn to family films, his quality varies significantly from one film to the next. I'm discovering that my favorite's from him so far are his early films that he did in the 80's, which is where we are right now with Commando Squad.

Released in 1987, the same year he directed the insanely badass and legendary Cyclone, and a year before his most famous film Hollywood Chainsaw Hookers, Commando Squad stars Playboy Playmate and actress Kathy Shower along with the one and only B-Movie badass Brian Thompson (Cobra, Hired to Kill). Shower plays an undercover drug enforcement officer who must go to Mexico to rescue a former flame and partner (Thompson) after he's been kidnapped by former narcotics officer turned drug kingpin Morgan Denny (William Smith). 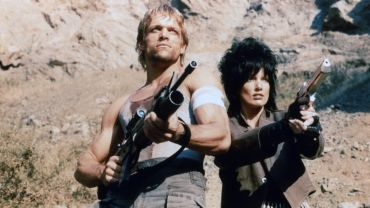 On the surface, Commando Squad should have been a slamdunk. It has everything you'd want for a film like this, and all the right ingredients are right here. And it works for the most part, but it never quite reaches the level of awesome it could have. After 2 back to back knockouts with Armed Response and Cyclone, it's hard not to go into this without some rather high expectations. And I did, only to be somewhat let down because this, while not bad, wasn't nearly as good, fun or entertaining as either of those. And you know, I realize they can't all be, especially from a guy who typically directs a good 5 films every single year. You have to expect that they're not all going to be awesome. But it's frustrating, especially with this film, because it could be, so easily. It's all there, yet missing only 1 single thing that really could have made it great, and that one thing being action. Yes. For an action film, it's pretty devoid of it for the most part. Not to say that there isn't any, because there is. In fact, the film begins with a solid action sequence, and ends with an even bigger one that kinda sorta makes up for the lack of it throughout the middle, but it's just not enough and for a film that boasts one of the best B-Movie lineups around, with one of the best covers, from a director who knocked it out of the park with his 2 previous efforts, there just needed to be more. It wasn't bad, but it wasn't badass either.

If you're going to walk away with anything, it will probably be it's excellent B-Movie cast. Seriously, it was just missing David Carradine. Brian Thompson is always a badass, so the guy needs no introduction here. The other lead however, is Kathy Shower, a former Playboy Playmate. She wasn't bad at all, but there's just something bothering me about her in this. In real life, and on this most excellent cover, she has huge blonde hair, yet in the film she wears a short black wig. It's even explained that it's because she's undercover, and there's even a single scene where she actually takes it off for less than a minute, before she puts it back on for the remainder of the film. And it's frustratingly obvious it's a wig, and considering she has this gorgeous big blonde hair on the cover art, it's a bit confusing that she never sports it at all in the entire film, even when she's not being undercover. It was just an odd decision.

This won't become a low-budget favorite the way other recent's like Cyclone, Hired to Kill and Bulletproof, but it was an entertaining watch from a director who's more miss than hit. I was really hoping for B-Movie gold, and sadly it's far from it. Still, there's enough here to give it a watch. Just don't expect it to blow you away.

How to watch it:
As far as I can tell, this has only ever been released on VHS, in a big clamshell edition from Trans World Entertainment, which isn't hard to come across for under $10. Other than that, I've never seen this on any DVD set or as a cheap standalone edition. I've also never seen this on Laserdisc, but I could be wrong.
Posted by robotGEEK at 5:21 PM