Revisiting Die Hard With A Vengeance 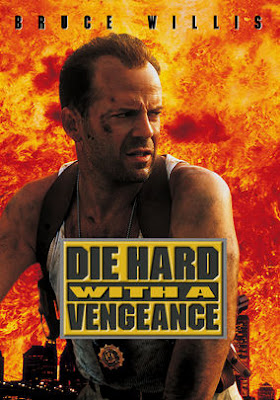 Of the original trilogy, I'd always liked this one the least in the 22 years since it's release. Sure I revisit it often for one reason or another, but never near as many times as the first two. My main beef that I'd always had, and still do, is that I just did not like how McTiernan shot this. I didn't like the grittiness to it, and I sure as hell didn't like the over-indulgent and totally unnecessary handheld shaky-cam approach. Yes I know it's a petty complain and criticism, but the visual aspect of every single film I watch plays a huge and significant role in how I will enjoy it. For me, the visuals play just as big, if not bigger, role in how I will enjoy any film. That's why as someone who grew up on films from directors like Russell Mulcahy, Peter Hyams, John McTiernan, Craig R. Baxley and John Carpenter, it's extremely hard to find any solid enjoyment from films directed by newcomers like Pierre Morel, Louis Leterrier and Michael Bay, who's frenetic shaky-cam approach makes me sick both physically and mentally. But anyway, let's dig in.

I remember when this was coming out, how excited I was that the legendary John McTiernan was returning to the series after bowing out and letting Renny Harlin direct the sequel. It was a big deal, because McTiernan has never directed a sequel before. And though I felt he was beginning this new transition to grittier more freestyle camerawork after having seen Last Action Hero, I was still optimistic, hoping he would go back to his roots. But my initial reaction to this was when I realized my worst fears became realized. But as they say, time heals all wounds, so I went into DHwaV with an open mind and I can honestly say that having revisited this again, I absolutely loved it. While I do still feel that McTiernan did a bit too much of the freestyle approach, it actually wasn't as often as I recall. In fact, some of the shots in here are absolutely gorgeous, done in a way that only John McTiernan could do. I've since seen a number of interviews with McTiernan where he says he never wanted to do the same thing he did with the first Die Hard, because that would be boring. So in that sense, I guess I can understand, but I just don't think the handheld approach, and the extent he took it, were all that necessary. There are many moments where the film still looks gritty and dirty, yet with his gorgeous compositions, New York and the action sequences also looked stunning. And its here where I struggle with trying to understand if he could do this, why couldn't he just keep it up for the entire film?? Because for all those slick camera shots, there are just as many nauseating and frustrating ones where it's as if the camera shakes were intentional and not a result of something else. A prime example is a moment when McClane and Zeus are in a car crash, and their car has flipped upside down in the rain. As McClane is running towards the other car that caused the crash, you can't even tell what the fuck is going on because of the overzealous shaky-cam bullshit. It's just frustrating. 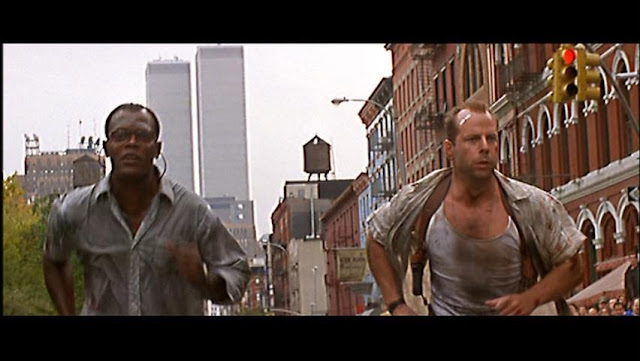 As a film, DHwaV is about as great and solid as they come for these types of films. This one literally begins with a bang and does not let up for the entirety of it's running time, and that's really one of the things that makes this a standout among the many Die Hard films. And there's so much action, tension and frenetic energy because it never lets up for a single second. And that's another one of it's many qualities that makes this one a standout among the others. As much as I love the first 2, with Part 2 being my favorite, I can also appreciate and respect what they did with this one, and I think it's this constant frenzy and chaos that helps me look past the shaky-cam aspect. Shooting this film in what looks like the dead of summer heat, in New York City, gives the film an aura of intensity. It's so chaotic and just being in that city at that time gives the film a huge boost of authenticity. Today, I doubt they would ever attempt that as it would be such a monumental effort. It would just be too expensive and too hard, but when you see it here, and it's not another random city substituting for NYC, it's so visceral. Every element just adds to the experience, making it a nonstop barrage of chaos in every frame. 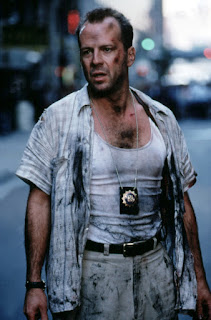 I feel a tad silly for not liking this as much as the others for all these years, when in fact it's quite an excellent entry in the Die Hard franchise, and just as good as the first 2, in a different way. Certainly leaps and bounds better than any Die Hard film that followed. And for me, it's also a special one in that it's the last time Bruce Willis actually looked, acted and dressed like John McClane. When I see him in any of the later films, I don't even recognize him. That's John McClane? It's certainly not the Willis from decades earlier, and it's not the same character either. He's somehow turned into a superhero and it's become a bit unsettling. I know there is talk of a new Die Hard film titled Die Hard: Year One, this time going back to his early years and serving as both a prequel and sequel in some capacity. I hope they can learn from all the backlash the last few films have received. But then again, maybe not, as the director is supposed to be Len Wiseman, who directed Live Free or Die Hard. Sigh.

What are your thoughts? Comment! Let's discuss!
Posted by robotGEEK at 2:54 PM