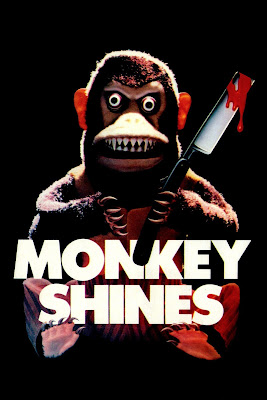 This has been sitting in my Hulu Plus list for a while now, but with the recent passing of George A. Romero, I figured now would be as good a time as any to finally revisit this one. I did see it when it was first released in 1988, but I haven't seen it since, so I remember virtually nothing about it. When I learned that this was the film he followed up Day of the Dead with, I was more stoked to see what he had to offer, because he had been on a killer winning streak up until this point. So I was curious to see if that streak could keep going with this. Let's find out.

The answer, sadly, is a big fat no. As excited as we were to revisit this, and how this really could have been something different in terms of horror, which this was clearly marketed as, this just didn't deliver at all in any capacity: visually, emotionally or structurally. First off, it's a drama/thriller more than anything. And even in that genre, there just wasn't any sort of proper tension, thrills or intensity to really generate any sort of reaction from you, the audience in a way that would make you care or feel something. And shockingly, despite it's interesting subject matter, Monkey Shines is surprisingly dull from beginning to end. While the actors do a fine job in their respective roles, there's just not enough to like about this as a whole to keep you invested. We had hoped that the ending would somehow make up for whatever was lacking leading up to that point, but just like the rest of the film, it ends without a bang. Too bad, because we were really looking forward to some solid 80's horror from one of the masters of horror. And that was another issue I had with this. While Romero has never really been the strongest visual director, except for Creepshow, even when he wasn't trying, his films always had a very Romero-esque look and vibe to them. You could just tell it was a Romero film, but with this one, it just comes off as very uninspired and straight-forward. Like anybody could have directed it. You would never know after watching it that you just saw a George Romero film. Interesting note: For the longest time, I could have sworn it came from a Stephen King story. Guess I was wrong.

How to see it:
Currently on Hulu Plus in a beautiful HD print. Be warned, it's pretty dull though. And if you don't like seeing the mistreatment of animals, even in the very slightest, then this movie is not for you.
Posted by robotGEEK at 10:39 AM