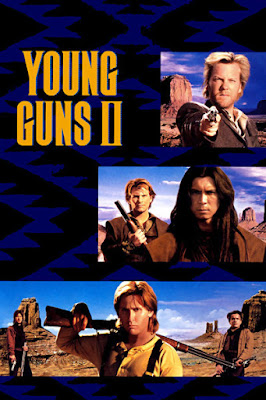 While I've always liked this film, for some reason it's taken me this long, literally many many years, to finally give it a revisit. But you know, it's about as perfect a time as any as I've been hitting some pretty fantastic westerns as of late, with checking out Silverado for the very first time being hands-down the crowing jewel this past year for westerns for me. What's funny is that I've actually been wanting to see this for a few months, even going as far as posting about it on both Facebook and Instagram randomly. So imagine my surprise, and excitement, when I saw that Crackle began offering both Young Guns films this very month. I love how the universe works sometimes.

Young Guns II has very quickly become one of my all-time favorite westerns, even slightly surpassing Tombstone. Gasp! But I'm telling you, this absurdly entertaining sequel has it all and then some. Any issues I had with the first film, and there were a few, are completely corrected with this entry. In fact, I couldn't think of a single thing to complain about here. It's about as perfect and badass as a western could possibly get, and I know, that's a bold statement, but holy shit this was fun.

Released just 2 years after the classic original, this film picks up years after the events of the first film, where Doc (Keifer Sutherland) has moved on and tried to put The Regulators behind him, while Billy (Emilio Estevez) continues his exploits and has a few new members of the group along for the ride. When the governor puts a bounty on Billy's head, he recruits former Regulators member and friend of Billy's, Pat Garrett (William Peterson) to bring him in.

Much like the first film, this one is filled to the bring with an insanely excellent cast in both the large ensemble as well as nearly all of the bit background players. If you're anywhere near my age (41), you'll spend a good portion of the film pointing out nearly every single notable actor and what you remember them from, no matter how small or insignificant their roles are in here, because to us, they're classic character actors and we've seen them dozens of times in some of our favorite films. And it's a blast seeing them all together in this film that never ceases to constantly surprise and entertain. 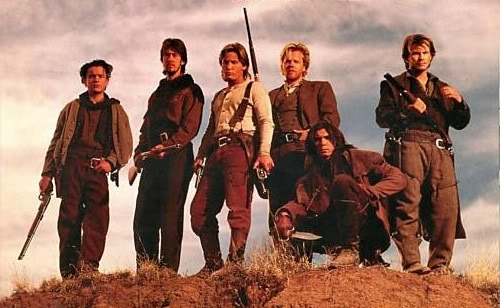 New Zealand director Geoff Murphy, whose most notable screen credit prior to this was the TV Movie The Quiet Earth, absolutely blows this one out of the water and completely stunned me with how beautiful and stylish this was, even for a western. Together with legendary DoP Dean Semler, these two create some truly stunning camerawork and imagery. Each shot was such a composition of precision and grace, constantly wowing me. While there are other great notable visually stunning westerns out there like High Planes Drifter, Dances With Wolves, Unforgiven and Tombstone, all of which I love, I personally feel that the work done here far exceeded my expectations and deliver (for me) the kind of visual experience I crave for these kinds of films.

I've always been a fan of Murphy, often considering him a vastly underrated director. I remember when Freejack first came out in 1992 and being in my early 20's and just loving his specific style in the way he directed. It reminded me a lot of Peter Hyams, and even Kathryn Bigelow. I loved it. And I have to say that his work here impresses me more than in any other film I've seen of his. In fact, this is making me itch to revisit both Freejack and Under Siege 2. Because of this film, I immediately just pulled the trigger and finally ordered another western he made a few years later, The Last Outlaw with Mickey Rourke for HBO. Needless to say, I'm pretty stoked for that one. 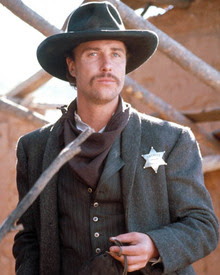 While I enjoyed Young Guns, I absolutely LOVED Young Guns II. It's just a better film all around, all tied together by Emilio Estevez' legendary portrayal of Billy The Kid. And as great as nearly every single aspect of this production is from the direction, to the writing, ensemble casting, cinematography and Alan Silvestri's thunderous (now iconic) score, it's really Estevez' performance that seals the deal. Even though I'd seen this several times before, I was just as enthralled this time, if not more, by his highly charming portrayal and infectious laughter. And it really is just a helluva good time from start to finish, maintaining a pleasant pace and vibe throughout. It's also a surprisingly macho film, with it's Bon Jovi title track and Alan Silvestri's retro-cool score punching your eardrums nearly every second. And let's not forget the legend that is William motherucking Peterson (Manhunter, To Live and Die in L.A.), killing it here as the legendary Pat Garrett. Seriously, I have a man-crush for the guy. I can go on and on about how great this often forgotten western is, but I think it's best for you to discover, or rediscover that for yourself.

I realize that this post got a bit long when it could easily have been condensed. But when I get excited about a film and I have no one to talk about it to, I just can't help myself. This is where I can let it out. Hope you don't mind!

How to see it:
Currently, it's available to stream for FREE on Crackle in HD. Right now, that is the best and only way to see this visually stunning film in HD as a blu ray has yet to be released. It's also been released numerous times as a standalone DVD or in a set or compilation of other similar films, all of which you can pick up for generally cheap. Still waiting on that blu ray though.
Posted by robotGEEK at 1:42 PM