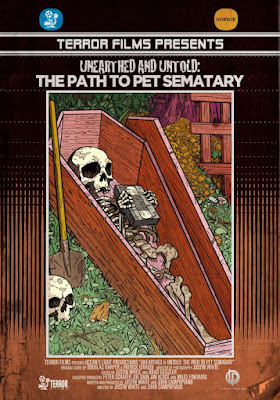 Here's a fun documentary that literally came out of nowhere. I had never heard of it, saw no buzz, no release info anywhere. And then one day while browsing Amazon this popped up and I couldn't believe it. Where did this come from? And do people even know about it? Why doesn't anyone talk about it? One night when we were looking for something horror-related to watch, this was a no-brainer. Let's dig in.

If you love Stephen King's famous novel, love the film adaptation, or just love horror in general, this is a must-see. This documentary touches on nearly every single aspect of this classic Stephen King tale, from it's inception, to book, to screen and it's lasting and enduring legacy. Filmmakers John Campopiano and Justin White do a meticulous job in investigating every aspect of the production of the first film, complete with interviews with all the main players, as well as production staff, the filmmakers and even down to the local town folk. Since King insisted that this be filmed in Maine, the production enlisted the help of locals for all aspects of the film and it's quite a treat listening to them talk about their experiences and how that film production affected the town in general. Really great stuff.

Pet Sematary has been regarded as one of the best King adaptations ever produced, and it really kind of took everyone by surprise, as you'll see in the doc. No one knew just how big it would be and how well it would be received, because Stephen King films generally have been hit or miss and a good portion of them don't do well or get adapted well, so this one kind of became one of the biggest successes with his book-to-film releases. There was so much I either didn't know, or had completely forgotten about in the decades since it's release. For one, I totally forgot that King wrote the screenplay himself, which is something he's only done less than a handful of times in his career, all with varying degrees of success.

This completely under the radar documentary took us by surprise and was a welcome addition to our documentary binge-watching. I'm still surprised that it's never mentioned or brought up. If you're a fan of Stephen King, horror, or just this film in general, you owe it to yourself to give this a watch. You won't regret it.

How to watch it:
You can rent it on a number of different streaming sites. I rented it on Amazon. There were only 1000 DVD/Blu Ray Combo's pressed, and I know there are still a few of those left for sale over at HorrorPack if you need a physical copy.
Posted by robotGEEK at 2:51 PM