Into the Night: A John Landis Masterpiece

Let me start off by saying that I was completely unaware of this films existence. Now, I'm a big fan of John Landis. I grew up watching nearly all of his films in the 80's and 90's, with a handful of them being films I watched religiously, most notably The Blues Brothers. As I got older, I began to appreciate some of his lesser known films, like Innocent Blood, which I absolutely love now. But how in the hell this film came and went flying so far under my radar that I literally never even heard of it until just last week is beyond me. Yet here I was, casually browsing eBay for Laserdiscs, not looking for anything in particular when I stumbled upon this listing for a film called Into the Night, directed by John Landis and starring Jeff Goldblum and Michelle Pfeiffer. Confused I did some more digging thinking that maybe I never heard of it was because maybe it was a Made-for-TV Movie or something. But nope. It's a full-on theatrical release from 1985, right before he did Three Amigos! and I'd never heard of it until now. Obviously it didn't do well or it would be a better known film, yet now I'm fascinated as to why. So I decided to do a blind-guy since the Laserdisc was going to be less than $5 shipped. I figured why not? Let's dig in.

I'm not going to give you a synopsis because the less you know going in, the better. But let's just say Ed's (Jeff Goldblum) life is dull. An insomniac, he randomly meets a woman in the middle of the night, which leads him to a crazy series of adventures throughout Hollywood.

Holy shit everyone. I can't believe how great this film was and how nobody EVER talks about it. How is that possible? This is the very definition of a lost gem. And it's such a "different" type of film altogether. I wouldn't even know how to categorize it really because it's like a melting pot of different genres, but it works! It's like Scorcese's After Hours, only set in California in 1985. And make no mistake, this is a very California film and it's amazing. Every single frame is drenched in 80's Hollywood, CA nostalgia. But it carries very much the same tone as After Hours, so that should give you some indication as to what to expect. 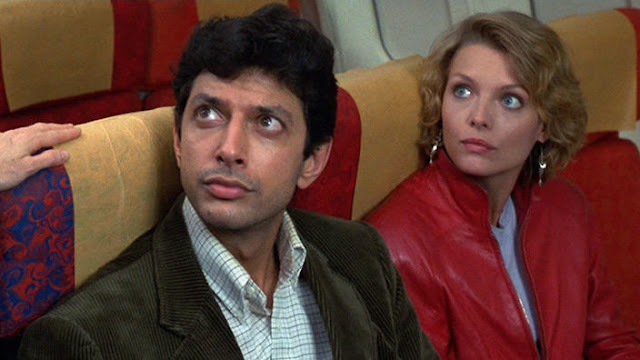 While I do watch a lot of movies on a weekly basis, with a lot of them being great, I can't remember the last time I was this surprised, enthralled and in love with a film experience. It's one of the most amazing films I've ever seen, and some of the most fun I can remember having with a film. It's like a dark adventure, thriller, comedy (while not actually being funny), drama and romance, all mixed together in a way that very few films can actually do. I don't even know how you could possibly and effectively even advertise this, so I'm not entirely surprised that it didn't do well in the theater. What blows my mind is the fact that I'd never even heard of it until now. I mean, for someone who grew up on Landis films, and just cinema in general in the 80's, it's quite a feat, yet it happened. And really, it's a travesty. More people should know about this film, more should be aware. It's such a unique film altogether, and if you love cinema, obscure films, or even if you just love John Landis films, you owe it to yourself to check this out as soon as possible. And I'll say it again, it's unlike any film I've ever seen. It's kind of like a dark, surreal odyssey through 80's Hollywood in the span of about 2 nights, with so much happening and so much being thrown at you, all in a very unconventional way that you don't really know how to take it all in until it's over, and then it just kind of hits you all at once and you realized you just had one of the most interesting movie experiences you've ever had.

If there's one thing John Landis can guarantee in nearly all of his films, it's a healthy dose of cameo's, and in here, more than any other film he's ever made, he delivers. The cameo's! Oh the cameo's! I simply could not believe my eyes. I was in movie heaven. Of course, I should point out that you really have to be a lover of cinema and of filmmakers to even spot them, because if  you're not one of those people who obsess over filmmakers, then you more than likely won't spot them. My wife didn't. I had to constantly point out who everyone was. There are of course quite a number of popular and cult icons, directors and musicians that you won't have any trouble spotting, most notably David Cronenberg, and best of all, the hitman! But I won't spoil it for you here because most of the fun is spotting them and knowing who they are. But hell, even I missed quite a few and didn't realize that until the end credits. Have fun! It's a blast.


I absolutely loved and adored every single aspect of Into the Night, right down to it's title font. So much of this film just gets nearly everything right. John Landis, who has never been the most "visual" director, absolutely knocks it out of the park here, framing every scene in a very John Landis way, while also pushing his own envelope a bit, giving it more substance to every shot. I don't know how else to explain it, but if you're familiar with his very particular way of shooting, just imagine that but more, bigger, better and more impressive. Think of his work on The Blues Brothers, only more slick. Another surprising element is it's impressive soundtrack, led by........B.B. King of all people. And while that sounds a bit strange, to me at least, you'll be surprised how well his title song, complete with 80's synth (seriously!) fits the film so well. I  had to keep asking myself "That's a B.B. King song??". I don't know if it was a trend he was riding in the mid 80's, but the synth background music that played along with his guitar and lyrics was magnificent, and encourages me to want to check out some of his stuff from around this time.

This was the first film John Landis directed after the Twilight Zone: The Movie tragedy, and if I'm not mistaken, he may have even been in the middle of court proceedings during this time. Maybe that accounts for it's dark tone? I don't know, but I should also mention that Landis also appears in this. While he's been known to pop up in his films for a brief moment here and there, I'd never seen him in such a large role, and I must say, it was awesome. His character never speaks, yet it's his physical actions and reactions that speak volumes and generate legitimate laughs. It's both admirable and impressive on a number of different levels and for a number of reasons. It makes you wish he acted more, because he was a revelation, even though he never spoke a word. 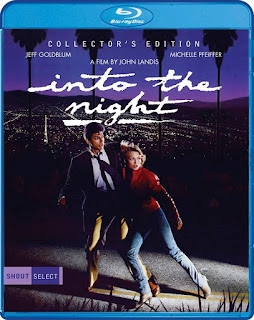 Into the Night is the very definition of a lost, underrated or obscure gem. Very few films pack the same kind of visceral punch that this one does, and the fact that it's gone largely unnoticed is such a sad reality, when in fact, it's quite an amazing film. It refuses to be boxed into a single specific genre, or defined because there are so many different elements that make it so unique. Even for a film that could in some ways partly be called a dark comedy, there is violence that will surprise you that always comes out of nowhere and blindsides you. And that's one of many wonderful elements this film provides you, the viewer. And there's some good news in store for the near future. Shout! Factory just announced that they will be releasing a Collector's Edition Blu Ray in November as part of their Shout Select series. No word yet on any special features, but I for one will be buying this. It will look stunning in HD and in widescreen. Also of special note it that they will be using the original cover art, and not the terrible DVD cover art. I won't even show it here because it's just awful.