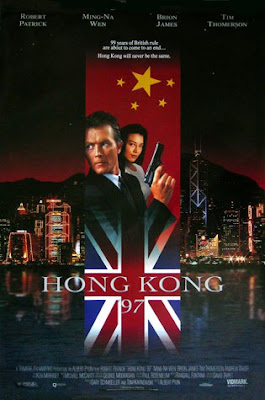 I've been a huge fan of Albert Pyun's for many, many years. I think for me, my first introduction to him might have been with Cyborg, but it was his Captain America film that I really took notice, which led me to dig into his large filmography of past and future films. I'm "still" digging into them and discovering many of them for the very first time. I just love so many of his films, but for a guy who has made so many, even I can admit that they don't all work. But then, there are many that do, and it's these that I just love to death and end up being some of my all-time favorite films.

Released in 1994, while Pyun was on somewhat of a creative winning streak having delivered classics and personal favorites like Nemesis, Dollman, Brainsmasher, Knights and Arcade, Hong Kong '97 is pretty much classic Pyun all the way. Tons of action, a killer cast, a plethora of unnecessary nudity, and Robert Patrick walking around in a big black trench-coat looking cool, kicking ass and taking names. Really, this film has everything you'd want in an Albert Pyun shoot 'em up and Hong Kong '97 does not disappoint.

Let's begin with this mighty excellent cast. There's of course Robert Patrick, 3 years after his star-making turn as the T-1000 in T2, and having quite the busy year with many projects and films being released, including Double Dragon and the PM Entertainment classic Zero Tolerance. He's just a pure badass in here and honestly, has never looked cooler. I had actually hoped that this would have been the beginning of a long and lustrous career as a B-Movie action god, but sadly that didn't happen. He would stay insanely busy, even today in a number of films in every genre and a lot of tv shows. Then there's B-Movie legend Tim Thomerson (Dollman, Trancers), the one and only Brion James (Tango & Cash, Another 48 Hrs., Red Heat, The Horror Show), and Ming-Na Wen (Streetfighter). This exceptional cast of true badasses really kind of threw me for a loop. It's rare when a small film like this can gather such a legendary cast of B-Movie gods, so when it happens, under the direction of Albert Pyun no less, I'm always game to give it a try. 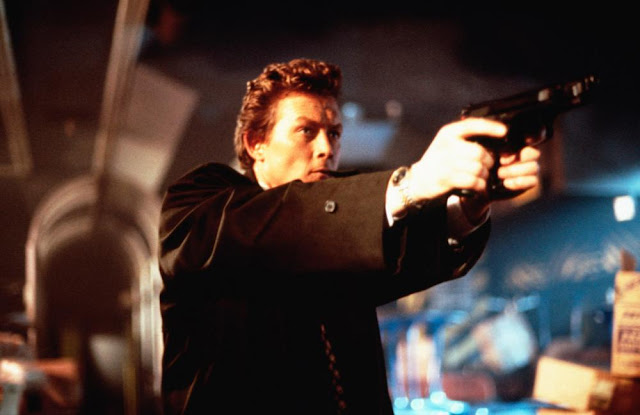 While this film doesn't necessarily reach the level of awesome that some of his better known films like Nemesis and Dollman do, it won't let you down either. The action, while pretty standard stuff with nothing about them being a standout, are plentiful and nicely shot. If there was an action sequence that would stick out among the others, it would probably be the first one with Patrick as he's naked in a room with a gorgeous woman, when a bunch of guys come in through the balcony and a nude shootout ensues. What makes this more interesting, aside from the nudity, is that it just looks so damn cool. The background is awash in a neon red and blue color palate and it's such a slick looking sequence.

Of course, aside from the action, the film tries really hard to take a political approach to the material. When there's not a random shootout happening, it's a deep rooted story about the transfer of power from Britain to China in 1997. And I don't know, for me it was in these moments, with all the politics and whatnot, where the film would slow down significantly. Not to say that that's a bad thing at all, because believe it or not, there's an actual story here and not just a bunch of action. Some people might dig the political stuff.

If you're a fan of action, or of Albert Pyun, or even of Robert Patrick, this is definitely a must-watch. A fun, stylish and slick looking film whose success lye's squarely on the shoulders of both Pyun's ultra-slick direction and Robert Patrick's ultra-cool hitman.

How to see it:
As far as I know, it's only ever been released on VHS here in the states. No DVD or even a Lasserdisc as far as I'm aware. I'm sure there's a DVD release out there somewhere else in the world, and an upgrade here in the U.S. would be really killer. Here's to hoping.

Correction and Update: 8/22/17
Chris was very kind enough to point out that this was indeed released on Laserdisc back in the 90's. I hope to come across one someday. I'd love to add it to my collection.
Posted by robotGEEK at 6:04 PM