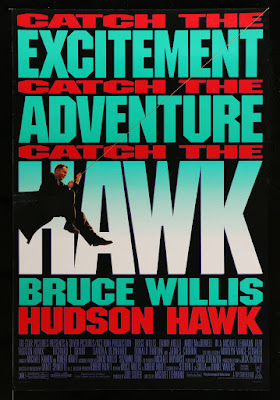 Now here is a film that often comes up in discussions with me. Why? Because as much as I love nearly everyone involved in this production, at the height of their creative popularity, I just can't stand it. I've never been able to get into this one......at all. And I've tried. So many times I've tried, and each time I walk away confused as to why people love this film so much. So when I saw it recently available on Crackle for free, I decided to give it another shot. It's been many, many years since my last visit, so maybe time has softened my feelings a bit and I can finally appreciate it. It's been known to happen.

Nope! Not at all. Again, I walk away confused. Why is this film so dearly loved by those that are passionate about it? I can see what they were trying to do, but it just didn't work. I feel they were trying to go for slapstick silly comedy, yet none of it lands. I sat in my chair cringing at the horrible unfunny bits that were supposed to be funny so often that you'd think I was in a dentist office getting my teeth pulled. I squirmed at every moment when you were supposed to laugh, yet I didn't hate it. There were things that I found amusing, yet not amusing enough that I actually wanted to finish it, because I didn't. I had to stop it a little over half way, but hey! That's the farthest I've ever gone with this one. I was just bored more than anything, and if the film had been this dull and unfunny up until this point, there was just not enough interest for me to keep going.

I will say though that I loved seeing Bruce Willis look like he was actually enjoying himself. He's clearly having a good time here, and I honestly can't remember the last time I thought that. When this was made and released (1991), Willis was the biggest stars on the planet, not just in the action genre, as he liked to mix it up greatly from film to film. At the time, he was turning out 3-4 films a year (that's a lot!), and continues to do so today, making him an incredibly busy working powerhouse. Yet, as I've mentioned before in other posts, I'm just not a fan of the guy Willis has become. He always looks like he's phoning it in, or just acts like he doesn't give a shit anymore. At least that's how I see him. Nothing he's released in the last 20 years has shown a hint of what Willis was doing before then, when he looked like he was having a good time and put in some solid effort. Now he just comes off as bored as he sleepwalks through his roles. I really hope he snaps out of it someday though. I mean, I know he's not the only one. Bronson made a huge career out of being exactly that in the 80's: the older action star who's unemotional portrayals in cop/action/thrillers was the norm. And it worked for him. He basically played the same exact character the same way in nearly every film he was in when he worked for Cannon Films, and it was acceptable. So maybe that's what Willis is trying to do? 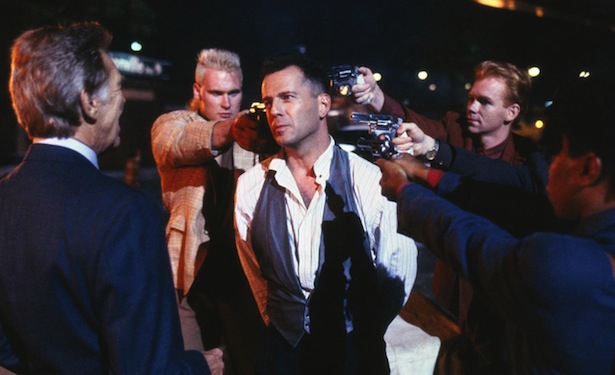 As far as the production goes, the film looks great. No expense was spared and you can see it all over the screen. Though I didn't care for the characters, the large ensemble of actors were impressive to me and I genuinely enjoy them in other films. But it's really the behind-the-camera group that kind of throws me for a loop with this one. For starters, it's produced by mega-producer Joel Silver, who at the time was as big as they come and produced nearly every big action classic under the same from Commando, Lethal Weapon and Die Hard, to Predator, Action Jackson and The Last Boy Scout. He also produced a similar film titled The Adventures of Ford Fairlane, which I fucking love to death and find much more successful as a film than this one. He would continue a winning streak, despite Hudson Hawk's box office failure, and would eventually produce the Matrix series.

The screenplay is credited to the legendary Steven E. de Souza (does he really need an introduction?) and Daniel Waters. Waters was responsible for the cult hit Heathers, and who also.......shockingly, wrote The Adventures of Ford Fairlane the previous year in 1990. He would then deliver Batman Returns in '92 and Demolition Man in '93 followed by a few forgettable films and hasn't really stayed all that busy since. Certainly not like he was in the early 90's. Director Michael Lehmann, who previously collaborated with Daniel Waters on Heathers, just doesn't seem the right choice for an action comedy. Nothing he'd done previously (only 2 comedies) would lead you to believe that he can handle the action sequences, and truthfully, while he's not terrible at it, they never deliver a solid punch the way they should. He's just not up to the task and it shows all over the screen. And maybe that's part of why this film just doesn't work for me. Maybe if a more experienced director, someone capable of handling the action, was behind the camera then maybe they could have made a better film. Not a great one, but with some proper editing and action sequences, it could have been passable instead of goofy. After a few comedies, drama's and dramedies, Lehmann would stick to television, where he continues to work today.

I feel that both Hudson Hawk and The Adventures of Ford Fairlane exist in the same universe, yet I'd much rather watch Ford Fairlane any day of the week before I ever give this one another chance. I was completely thrown by how goofy this was. And I'm pretty sure I'm not alone, as it was a huge box office misfire for everyone involved. I guess people going into the theater for an action caper felt misled when in fact, it's a slapstick comedy musical with sprinkles of action and everything is just so over-exaggerated. In the end, Hudson Hawk is a hugely frustrating experience because it fails so miserably, yet most of the right ingredients are all there. They're just not utilized well at all and the film suffers horribly. Too bad. Done right, it could have been something pretty great. Needless to say, most involved with this disaster didn't suffer too greatly as their career's continued to flourish. Though I did read somewhere that producer Joel Silver was the one who suffered the most to some capacity.

Please comment! Let's discuss!
Posted by robotGEEK at 10:44 AM