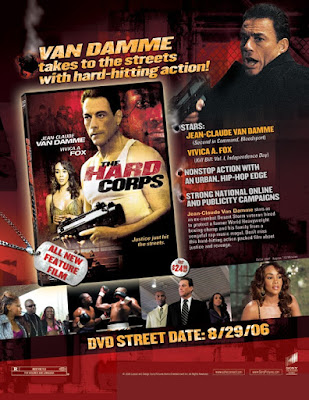 I have to admit that around Maximum Risk and Knockoff (late 90's era JCVD), Jean-Claude lost me. I found no enjoyment in either of those films, and while I absolutely loved Double Team (1997), anything after went straight to home video, which usually means low-quality films, and that's just never a good sign. I did try a few of his films here and there, but I could never sit through one completely. They just weren't any good. So I pretty much strayed from him films until 2008's JCVD. But even then, with his career seemingly at a resurgence, nothing that came after that was any good either. In fact, the only thing I actually liked from him in the last 20 years is easily the Amazon show pilot for Van Johnson, where he was just absolutely brilliant. I haven't heard anything new about it yet, but I do hope it gets picked up for a series.

Philippe Savauge (JCVD), an army vet, suffering from PTSD, is hired as a bodyguard for local boxing champ Wayne Barclay (Razaaq Adoti). When a local drug kingpin, Terrell Singletery (Viv Leacock) is released from a prison stint, he sets his sights on exacting revenge on Barclay from a long-running feud. Savauge soon realizes he has his work cut out for him and things get even more complicated when it seems like Barclay's sister and manager Tamara (Vivica A. Fox) might have a thing for Savauge.

The Hard Corpse reunites Van Damme with  his Lionheart and Double Impact writer/director Sheldon Lettich, and honestly, that was the only selling point for me to actually make the effort to watch this. Sure it had been many, many years since either of them had a hit, but I went in hopeful. And you know, it wasn't bad. Not at all the kind of film I was expecting, but it wasn't terrible either. It was shockingly able to keep my attention even though it ultimately ended up being the kind of film that I don't necessarily seek out. And after having seen it, it's not a film I will probably ever watch again and won't go down as one of Jean-Claude's better films.

There's really not much motivation for you to actually check this out, unless you're a die hard completest of JCVD films. There's really not a lot of action, and you only ever see him use his martial arts skills during one scene in the film. Even then, it comes across so half-assed, You'd never know these two (Lettich and Van Damme) were the same team behind some of his earlier classics like Bloodsport, Lionheart and Double Impact (a personal favorite). But still, it's not a bad film. Just not a good or enjoyable one. Sheldon Lettich, while one of the few who spearheaded the whole martial arts/action movement in the late 80's to early 90's has clearly lost his mojo by this film. While he would only ever direct 8 films in his career, this would be his last. What makes the experience more trying is that Van Damme just looks so tired and uninterested here. He literally looks like he couldn't give a shit anymore than he already does and comes across as completely bored and unmotivated. Sad day indeed. Not one of his worst, but you can certainly find a better way to spend an hour and a half of your time.
Posted by robotGEEK at 12:54 PM