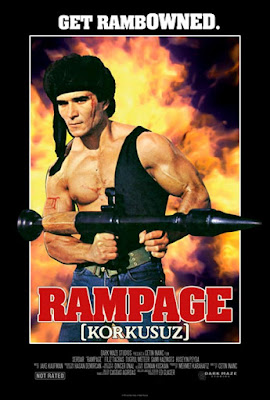 Soooo you may have noticed that it's been quite a while since I've posted a Bad Movie Night review. It just seems like they're becoming harder and harder to find these days, as I've pretty much tapped out that little niche sub-genre as much as I could. But I know there are still more out there, I just need to find them. Sometimes it's through sheer chance, like with this one. Someone posted an amazing clip from this movie some time back on Facebook, and I immediately set out to track this down, which unfortunately would have to be a bootleg rip since it's never gotten any form of release here in the states. But let me tell you. I was not at all prepared for the insanity that was to follow once I finally sat down to watch this. So let's dig in.

What a weird fucked up movie this was, but in the best possible way. And you'll know what I mean by that right in the beginning, because unlike the U.S. films, Rambo starts the film off by being a murderer, in one of this film's first WTF?! moments, setting the tone for what's to follow. And it also begins with a weird inexplicable barrage of clips and scenes that make absolutely no sense. It's only until halfway through the film do you realize that what you saw in the beginning were random clips of the film strung together in no order whatsoever. A totally random and odd way to begin a film for sure, and done in such a way that you don't even realize that that was the intention until much later on in the film when you begin seeing those very same clips. I'm telling you, Turkish Rambo is spectacularly odd and fucked up. 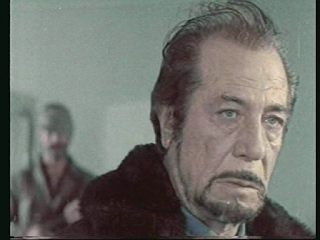 What really makes this stand out from all the other Rambo ripoff's is that it doesn't follow the story of either First Blood or the sequel. In fact it doesn't even follow the same origin story of the character at all. It's it's own beast, and quite wonderful in a hilariously awful and WTF? way, with it's severe low-budget DYI quality only adding to the experience. Seriously, it looks like it took them a week to make this, and maybe it did? Most of the acting is laughably terrible, with many of the actors (or non-actors I should say) looking directly into the camera at any given moment. Hell, bodybuilder turned actor Serdar, who portrays Rambo, barely utters a word in the entire film, which might be a good thing to hide the fact that he can't act. And guess what? He's actually not bad once he does begin talking. But the one in here who takes the cake is main bad guy Ziya, portrayed by Turkish actor Huseyin Peyda, who looks like an old Hispanic version of Vincent Price. He's hands-down the standout in the film and he's just so angry and over-the-top raging in every single scene he's in for no reason at all that he absolutely steals the show. If you enjoy entertaining bad movies, or love Rambo ripoffs, you will absolutely love this one. While not as great as the legendary The Intruder, or even the equally great Strike Commando, it's worthy of being in the same league of legendary Badass Rambo Ripoff's and certainly worth tracking down. Invite you're friends, it will surely be a hilariously good time.

How to see it:
This one will take some detective work. Never officially released anywhere in the states, there are plenty of bootlegs you can purchase from a number of online sites like ioffer and sometimes eBay. It might even pop up in it's entirely on YouTube from time to time too. You're just going to have to hunt for it. But trust me, it's worth the effort. I should warn you though, I've never come across a decent print or copy. Each one has been beat to shit, including the one I used to review this film. So good luck. I know Neon Harbor and Dark Maze worked together to release a limited edition DVD run of this some time back, but it's since become Out of Print. So who knows? Maybe someday someone else will take up the cause.
Posted by robotGEEK at 1:05 PM