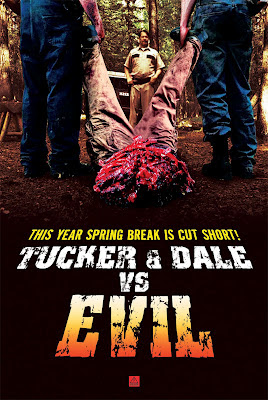 Tucker & Dale vs. Evil has a LOT of things going for it. For one, it's insanely clever. It's also authentically funny and very well made. In the confines of a spoof, this things still looks and feels like a really good horror film, reminiscent of the output of slasher flicks from the 80's.

Basically, it's a spoof on 80's slasher flicks, only I don't think spoof is the right term because it's not stupid or sill, but it's very clever, and never goes the Scary Movie route. Instead they decide to tell a straight story about a bunch of obnoxious teenagers who head out to the lake in the backwoods and encounter Tucker & Dale, two best friends and hillbillies who just like to keep to themselves and fish. Only circumstances won't have that and with one ridiculously hilarious situation after another they are injected into these horrible situations where they always come out looking like bloodthirsty killers out to kill the entire group of teenagers. Only that's not the case at all.

Alan Tudyk is always a pleasure to watch. He seems to excel in comedy, but I've seen him in a lot of different roles and genres and the guy can certainly handle himself in any type of film. But here as the one half of the duo he's just hilarious. Tyler Labine, who plays the other half of this duo is also great. I also need to give props to the casting of the overly annoying and stereotypical teenagers. They were annoying and they were pure stereotype.

What surprised me the most was that Tucker & Dale vs. Evil doesn't play for cheap laughs just to make you laugh. The laughs are genuine and they never pull any pop culture references or try to imitate a scene from the current big horror film to make it interesting. It's a full on horror film, and then it's not when you realize what's really happening, which makes it pretty fuckin' hilarious. This was such a breathe of fresh air and one of the better times I've had watching a movie recently. I was surprised to discover that this is writer/director Eli Craig's only feature film and hasn't really done much other than an episode of Brothers & Sisters, which really surprising because he seems to have genuine talent behind the camera. This film looks more authentic and professional than half the shit that comes out in the theaters these days. So I really hope he hasn't abandoned his directing aspirations. Just with his work here, you can tell he's capable of something really amazing given the right budget and project. Definitely do yourself a favor and check this one out. You'll be glad you did.
Posted by robotGEEK at 12:03 PM