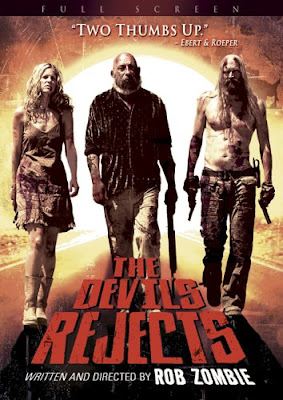 You know, sometimes I still can't wrap my brain around the fact that Rob Zombie is a big time Hollywood filmmaker. It just blows my mind. I might not like everything he's done, but I have tremendous respect for the guy. He's done something not a lot of people have ever done by transitioning from music to filmmaking successfully. But he still does music and tours to this day, which blows my mind even more.

Zombie is a love him or hate him kinda filmmaker. He definitely possesses a specific type of look and feel for his films, kind of a late 70's to early 80's style of filmmaking, and sometimes it works, and sometimes it doesn't. I dug his first feature quite a bit with House of a 1,000 Corpses, which felt like more of a homage to 70's horror films than anything. But I only saw it that one time and never felt the need to revisit it. I'm not even going to discuss the Halloween films. I had and have no desire to see those. I wish I could give an explanation as to why, but I can't. They just don't seem very good to me. I mean, why mess with the original when it was so great to begin with?

So for some reason this one passed me buy. I didn't actively avoid it or anything, but I never made an effort to take it in. Now I'm kicking myself because as I'm sure most of you will agree, this is definitely his most accomplished film to date. A great violent, bloody and dirty film about a family of killers with no remorse on the run from the law led by family matriarch Captain Spalding (Sid Haig). One of the things most will notice almost immediately is Zombie's gift for casting. Here it's about as good as it could possibly get. Besides the three principle players of Bill Moseley, Sid Haig and Sheri Moon Zombie, you have greats like William Forsythe as a crazy cop on their trail, Ken Foree, Geoffrey Lewis, Priscilla Barnes and none other than Danny Trejo. Great, great cast all around that only lend this film's awesome vibe.

Another aspect I liked was how Zombie tried to push the envelope with this one in terms of shock value. A sex scene early on is a good example, as is a torture sequence in a hotel room. Zombie's gritty style does wonders for the story in general, but the violence and makeup effects work is nicely done as well. A fun, gritty, violent and bloody tale as told the way only Rob Zombie could tell it. Definitely the best he's done so far, but I am hearing really good things about his soon to be released film The Lords of Salem. So we might just have another contender.
Posted by robotGEEK at 10:37 AM