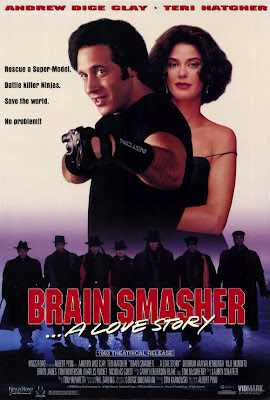 Ya know, for some reason, much like Fright Night Part 2, this is a very rare and hard to find film on DVD, and because so, it goes for insane amounts of money. Not really justifiable in my opinion, but that's the way the collectors market goes when dealing with OOP DVD's.

But anyway, Brain Smasher. I've always heard about this one. I'm a big Albert Pyun fan and he has a few titles in his long and vast filmography that are just really hard to come by these days. Sometimes I get lucky, like when I  scored my Nemesis Widescreen Laserdisc, but a lot of his 80's and 90's stuff is very rare or just not even available on DVD altogether. And if it is, more often than not it's not available in it's proper aspect ratio and you get a bad full frame presentation. Another film of his I have yet to get my hands on that doesn't seem to available is Knights. But that's another story.

You gotta love Andrew Dice Clay. He's just great. He can be tough, charismatic and a much better actor than people give him credit for. I can only assume it has to do with a few of his missteps related to his brand of comedy, like the whole ridiculous MTV thing. But that was the 90's, if that had happened today or if he was telling those same jokes today, it wouldn't even be an issue. I honestly thought that after the awesome Adventures of Ford Fairlane hit theaters, his star would rise. Obviously that wasn't the case. But we did get a few good films out of him, though none as great as Ford Fairlane.

Here he plays a bouncer known as Brain Smasher, because apparently he's just really good at smashing brains while beating you to a pulp. He unwittingly gets caught up in a scheme where Sam Cain's (Teri Hatcher) sister tries to get her to smuggle a rare flower into the U.S. Soon a band of coolly dressed monks (not ninjas!) arrive in search of this rare flower and its up to Brain Smasher (Andrew Dice Clay) to protect Sam and save the day.

This was a fun movie. It's very simple and very understated, which only adds to it's charm. Clay was great as the bouncer with a big heart, and Teri Hatcher didn't get on my nerves. Oh, and most importantly, she's actually hot in this. I have to say it was around the late 90's where she got too skinny for my taste, but here she's got a healthy dose of curves and there is one 2 second long scene in particular where they show here in a bathing suit during a photo shoot (she's a model) that almost makes your jaw drop to the floor. You think, "Wow, she was actually hot once!".

Really, it's just an endless array of fight scenes where Brain Smasher kicks the living shit out of these ninjas (oops! Sorry, they hate to be called ninjas!) with only his bare fists over and over. You'd think they'd learn their lesson, but they don't and they keep coming back for more only to be shown again and again that a roundhouse is no match for Brain Smasher's fists. Despite the action, it's also funny. Clay doesn't throw around the jokes and ad lib like he did in Fairlane, but he has enough funny lines that work well and his chemistry with Hatcher is pretty good. This just seemed like such a good fit for him. Too bad he didn't get enough roles worthy of his kind of style.

Albert Pyun. I have to say this one made me happy. Here he used the same style he used in a lot of my favorite Pyun flicks. Stylish, yet a little free flowing with the steadicam shots, but never looking half-assed. It all looks good. I can't say the same for some of his later films, but this was a good example of the Albert Pyun style of filmmaking that I like so much.
The supporting cast I must admit is also really, really fun here. In very small roles you have Brion James and Tim fucking Thomerson. But you've also got a plethora of who's who in the action and B Movie world of the 80's and 90's and it's fun to sit there and point out where you remember them from. Like Peter Kwong for instance. He was "Rain" from Big Trouble in Little China and Stargrove's friend in one of my all time fav's, Never Too Young To Die. But dude, there's a lot of people in this film and it's a blast.

Now for the kicker.
Right now, this is actually available on Netflix Instant. Yes, you read that right. For how long? I don't know. But currently you don't need to shell out insane figures to watch this, just hit up Netflix's streaming service and you can watch it this very second.
Posted by robotGEEK at 7:16 AM