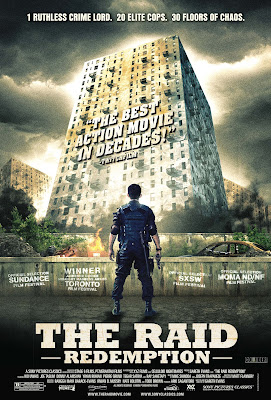 I know I'm really late jumping on the bandwagon with this one. The problem is that it only now hit DVD where I live and the one week it was showing in our theaters, I was unable to attend. So here we are.

I'm going to keep this short and sweet.
The Raid is hands down one of the best action and martial arts films I've seen in the last 20 years. It's fucking brutal in it's depiction of violence, which often seems endless, and it's stunningly shot and choreographed by director Gareth Evans and up and coming star Iko Uwais (Merantau) that I hope it becomes an inspiration for other filmmakers, to show you that you don't have to revert to shaky cam quick edit bullshit to make a film like this. You can use good ol' fashioned filmmaking and still achieve the same results.

What really works for this film is that the premise is pretty simple and straightforward. An elite special forces team is assigned to storm a building run by a drug lord. When the team enters the building, they become trapped and sabotaged by the drug lord and his small army and must fight there way through the many stories  just to make it out alive.

It's simple, yet very effective because while there are a few surprises in store when it comes to the story, it's really all about the bone crunching fight scenes and the insane amount of blood and violence on display, and oh how beautiful it is. The action and fight scenes come fast and furious (no slow mo in here) and amazingly choreographed. Some of the stuff on display in here, I've never seen put on film before and it literally blew me away.

This guy Iko Uwais, he's gonna be huge. Such a natural talent in front of the camera, and one hell of a martial artist. He helped choreograph the fights in here as well, and if this is just the beginning of his career, I can only imagine what he has in store for us in the near future. I was already blown away with him in Merantau, and this just solidifies his "Badass" stature in the world of Badass Cinema.